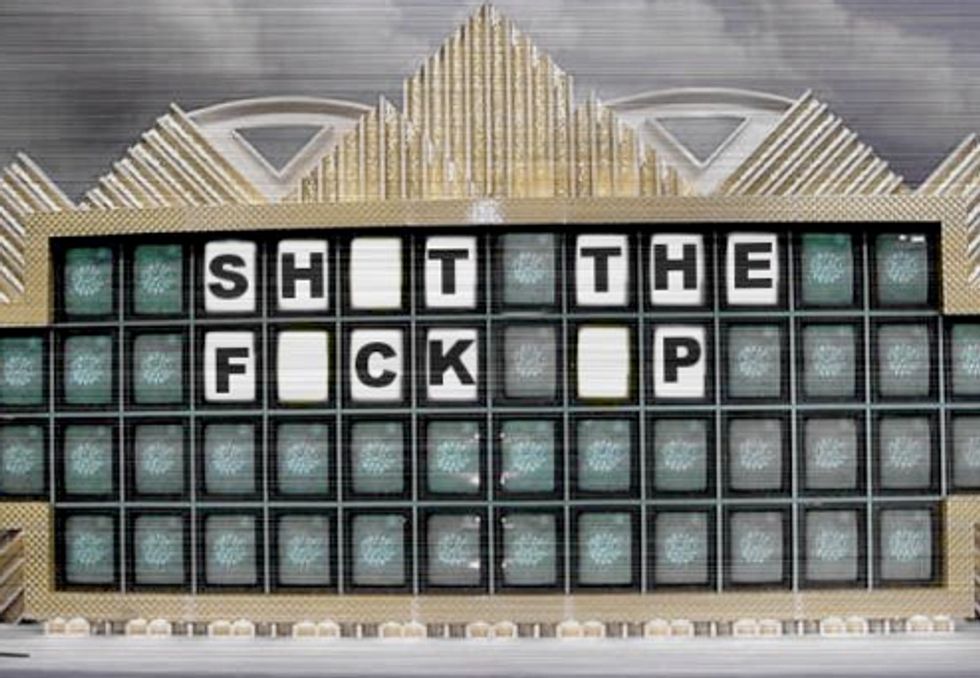 Oh man, so, you know that cutesy little insight you may have Mitt Romney and the Secrets of Mormonism that you think could pass off as clever or "ironic"? Well, it's not really interesting at all, nor is it clever, and you don't know what irony is. So please, please, cut the crap, Brian Schweitzer and Martin Bashir, because we don't really need to spend the next seven months watching daily evil cable news debates about whether Romney's Mormon church or Barack Obama's Jeremiah Wright church is WEIRDER, as would inevitably -- and not unfairly -- be the case.

Here's the governor of Montana, and 2016 presidential hopeful, Brian Schweitzer, showing the limits of his discretion. Is this a sentence you're actually constructing, Brian? "I am not alleging by any stretch that Romney is a polygamist and approves of [the] polygamy lifestyle, but..." This is your work?

While discussing swing states, Schweitzer said Romney would have a “tall order to position Hispanics to vote for him,” and I replied that was mildly ironic since Mitt’s father was born in Mexico, giving the clan a nominal claim to being Hispanic. Schweitzer replied that it is “kinda ironic given that his family came from a polygamy commune in Mexico, but then he’d have to talk about his family coming from a polygamy commune in Mexico, given the gender discrepancy.” Women, he said, are “not great fans of polygamy, 86 percent were not great fans of polygamy. I am not alleging by any stretch that Romney is a polygamist and approves of [the] polygamy lifestyle, but his father was born into [a] polygamy commune in Mexico."

Meanwhile, MSNBC lobsterback Martin Bashir ruins a perfectly good observation that always needs reinforcement, about how Mitt Romney is serial psycho liar who loves nothing more than telling egregious lies all day, with an elaborately dumb point about how Mormons think liars go to Hell, so Mitt Romney is a hell-bound hypocrite or something. Savvy, Martin. As though the other hallucinating desert people religions approve of lying, or...? MSNBC ruins everything:

"It doesn't matter how many times he hears the truth, Mitt Romney prefers to tell lies," Bashir said after castigating Mitt Romney as a liar three times.

"Which brings us to the moral codes of Mormonism that Mr. Romney claims to live by. In Section 63, in verse 17 of the Doctrine and Covenants of the Mormon Church we find this: 'All liars, and whosoever loveth and and maketh a lie, and the whoremonger, and the sorcerer, shall have their part in that lake which burneth with fire and brimstone which is the second death.'

"And from the Book of Mormon to Nephi, Chapter 2, Verse 34 we find this: 'Wo unto the liar, for he shall be thrust down to hell.'

"Given what the Book of Mormon is clearly saying, Mr. Romney has but two choices. He can either keep lying and potentially win the White House, but bring eternal damnation upon himself or he can start telling the truth. The question for him, I guess, is which is more important," Bashir said on today's broadcast of "Martin Bashir."

Martin, Martin: Maybe you thought you had something interesting here. But you did not. You fucked it up, Martin.

There's just no political benefit to be had with this shit and it's ugly and hypocritical. There are so many other creepy things about Mitt Romney to work with. What do we want to spend all summer talking about? If it's going to be YOUR RELIGION IS WACKY, NO, YOURS IS, then fine, but your Wonkette writer will have to go get himself in a coma right quick.