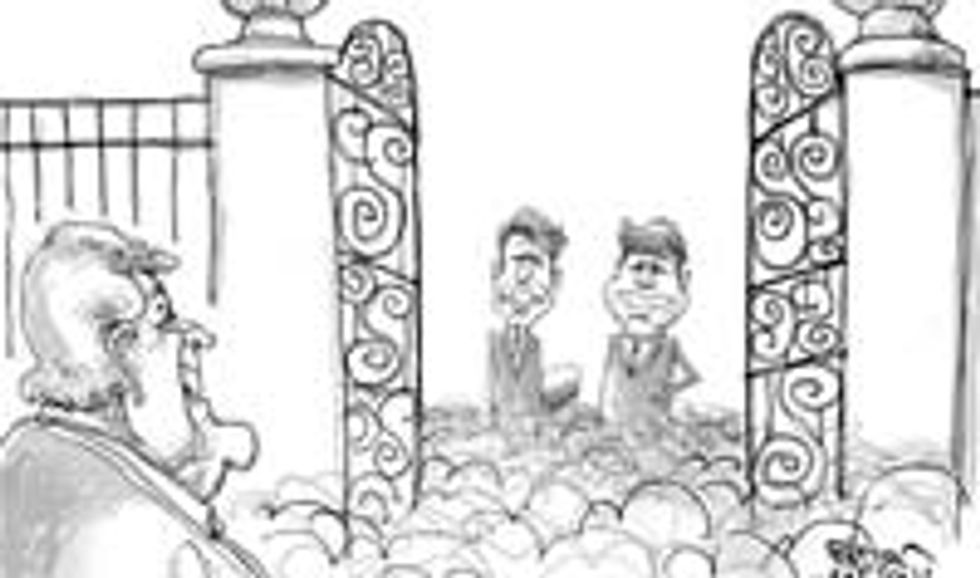 By the Comics Curmudgeon
I will not lie to you: Sometimes political cartoons can be confusing! Especially for you, the unwashed masses, who never got any proper art education in school because your elected officials decided that Americans needed to know more about "science" and "math" and a bunch of poindextery stuff like that. Fortunately, your Wonkette provides to you, free of charge, explanations of some of the more obscure cartoons, straight from the typing fingers of the world's only professional cartoon explainer. Join us after the jump, and prepare to be AMAZED AND ENLIGHTENED!

While technically a "political" cartoon, this comic is really more about reproductive biology than anything else. You see, when an anthropomorphic elephant and an emaciated Frankenstein love each other very much, they might decide to have a baby together. How is this hybrid elephant-Frankenstein baby created? Not through your filthy human sexual intercourse, thank you very much; not only is such a prospect distasteful in the extreme, but it may well also result in a terrible injury to the Frankenstein, due to the disparities in mass between the two partners.

Fortunately, a unique lifecycle has developed: the future parents lock in amplexus, at which point the elephant emits spores from its face, which land in the Frankenstein's huge, beady eyes. Over the next six to eight months, tiny buds begin to blossom around the eye sockets, eventually falling off and skittering around the floor; this is the larval form of the elephant-Frankenstein hybrid, and usually one or two from every brood will make it to adulthood. THE MIRACLE OF LIFE!

This cartoon is about the Kids Today, and how they are all terrible. Remember when you were a kid, and summer vacation involved lazy days skipping rocks down at the reservoir, or riding your bike around the neighborhood, or playing pick-up baseball games down at the sandlot, or engaging in some halting sexual exploration in that old abandoned house at the end of the block? You'll notice that all of these good, healthy activities are totally free, and therefore can be enjoyed in flush and lean times alike. Yet Junior here has theatrically propped up a newspaper with a screaming RECESSION headline as he writes his whiny "What I Didn't Do On My Summer Vacation" essay. Oh, sorry, were mommy and daddy unable to afford to send you to polo camp, or buy you a Nintendo XBox, or get tickets to Coachella, or whatever the hell kind of money-grubbing thing you feel you have some kind of constitutional right to? Do you think you're too good to go collect tadpoles down at the creek just because you had four different HBOs up until a few months ago? Your kind makes me sick, punk.

This cartoon dares to tell the difficult truth: that the world of business, important as it is to providing the fast food and alcohol that Americans need to endure the pain, is a nasty, nasty world, the most apt metaphor for which is a portly lady taking a dump. Congressmen need to go from "stall" to "stall" to take a close look at this so-called "private business" to make sure it's all on the up and up, which is why most members of Congress are hardcore scat fetishists.

I'm reasonably sure that that's supposed to be Henry Waxman at the head of this Congressional stall-peeping delegation. It's definitely a Democrat, since the person in the stall is female.

To understand this cartoon by Glen McCoy, you need to understand its context. That context is the cartoon McCoy published the day after Kennedy died, which probably caused some whiny liberal editor to request a somewhat classier Ted Kennedy death cartoon, so here you go, you fucking pinko, Ted is meeting his liberal brothers, in Papist heaven, I hope you're happy. However! While this might seem more Ted-friendly, doesn't the scenario depicted sort of screw him? After all, Ted has arrived in heaven a pudgy old man, while John and Bobby are still skinny and young and handsome and probably getting all kinds of seraph tail. Surely they will resoundingly defeat the elderly Ted-angel in the rousing game of touch football they're about to play on God's front lawn.

This cartoon defies all of your bourgeois demands that it be "about" something. An everyman figure walks by a newspaper bearing the headline "CASH FOR CLUNKERS PROGRAM ENDS," and thought balloons "...sort of." What exactly does he mean by this? Is he looking at the prominently signed "BANK," and considering all the cash the government is throwing at the clunkers of the financial world? Or is the key figure here the huddled hobo, society's clunker, whose shakily held cup requests some cash from the rest of us? Or are both bank and bum just a bit of local color, and the "...sort of" merely referring to the rather anticlimactic way in which the actual Cash for Clunkers program ended? The best thing is that you can choose any answer, or none, or all of them, and by "best" I mean "extremely irritating."

This cartoon is much more straightforward. It is about how every man wants to make love to a football, with his butthole.