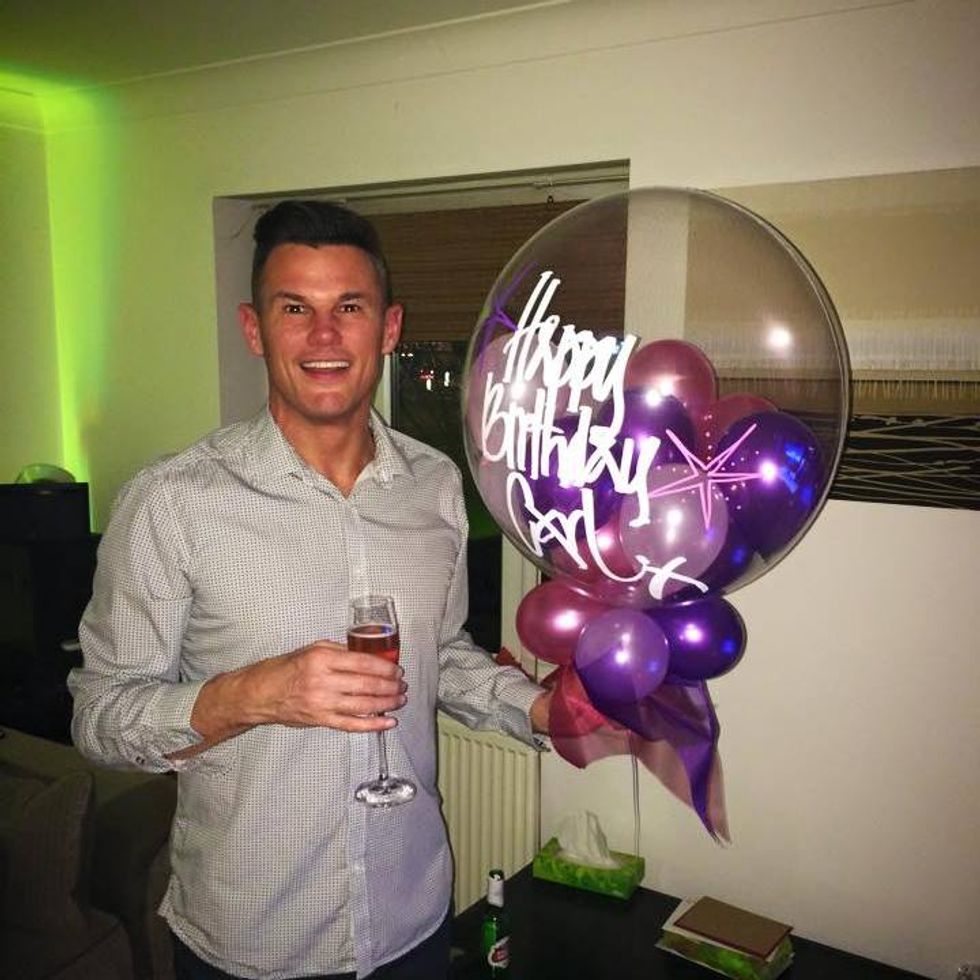 Oh, we are just funnin' with all the Carls out there! We're sure there are lots of Carls in the world about whom people say things like "OOH I want to go home with Carl tonight!" and "Who's that? Oh that's just Dreamy Carl!"

[wonkbar]<a href="http://wonkette.com/600836/fine-ass-reykjavik-mayor-is-your-new-political-sexxx-fantasy-of-the-week"></a>[/wonkbar]So last time we Wonked all over a foreign mayor, it was a dude named Dagur Bergþóruson Eggertsson, who is the man king of Reykjavik, Iceland. And of course, we started this series off by paying homage to our once and future mayor of Canada, Justin Trudeau. (Shut up, we can call him the "mayor" of Canada if we want. He's too manly and secure to care.)

But now we must introduce you to the guy up there, Carl Austin-Behan. He is the new Lord Mayor of Manchester, which is in the land of British Englishes! He is a gay, so step off, LADIES. He has a hyphen in his name, which means he is gay-married, so step off, MENZ. He also was Mr. Gay UK way back in 2001, when he was a fresh young thing. (PICTURES TO FOLLOW, BECAUSE DUH.)

So we wanted to know, what in the sam hill is a "Lord Mayor," so we asked the Wikipedia, and it said that it's one of those ceremonial, royal doohickeys the British are so fond of. So he wasn't elected, but rather the title was CONFERREDETH UPON HIM.

The 44-year-old ... felt it was time for someone who represents Manchester’s celebrated lesbian, gay, bisexual and transgender community to finally don the ceremonial robes.

And it is all the more meaningful after a long battle to stop his sexuality blocking his ambitions.

Just over 20 years ago he was kicked out of the Royal Air Force for being gay at a time when it was still illegal.

But now – a few months after getting married, and starting the adoption process with his husband, Simon, – he is taking the highest ceremonial office in the city.

“I thought it was time we had an openly gay lord mayor. We have had different races and cultures doing it – so this is a recognition of the LGBT community,” he said.

AWWWW, that's a great story. Here's a video of Carl talking about his new position:

Now, let's cut the BS and get to the man-meat pictures.

As we can see from his portfolio when he was Mr. Gay UK, our Carl was (and still is!) very sexxxy, and also Just Like Us.

He gazes sexily at the camera in front of some sort of rock formations, just like we do all the time.

All these pics via Mr. Gay UK

He lies out on the grass, his sash declaring what a winner he is. You guys did that yesterday afternoon, after work!

Sometimes, he sits here on the beach just like ...

GUYS, HIS EYES ARE UP THERE, NOT ON THE SAND NEXT TO HIS RIGHT FOOT.

Anywho, doesn't that white outfit call for a white sailor hat? We think it does!

Sometimes when Carl is on the beach, he gets thirsty :(

You've been there. We all have.

Occasionally, when he's about to go fight a three-alarm blaze, he gets in such a hurry he forgets a lot of his clothes! EVER BEEN IN THAT SITUATION? Of course you have!

WHERE'S THE REST OF YOUR CLOTHES, CARL? Oh, they are back on the beach, with all the rest of his outfits:

Anyway, congratulations to Carl on being hot, and on being the new royal highness president emperor king archduke of Manchester! Here's a picture of Carl with his husband, being BESTOWED UPON, or however they do it:

If you want to see some more, ahem, revealing shots of Carl, head over to Mr. Gay UK.

[wonkbar]<a href="http://wonkette.com/596188/daily-caller-would-like-to-resettle-sexy-syrian-refugees-in-tucker-carlsons-pants"></a>[/wonkbar]And for all of ye who bitch about WHY IS IT NEVER LADIES FAP FAP FAP, either go to the Daily Caller and see what's brewin' in Tucker Carlson's pants, or send your requests to Dok or intern Dominic, or maybe if Robyn or Becca are feeling lezzy that day, they MIGHT give you a sexxxy lady post.