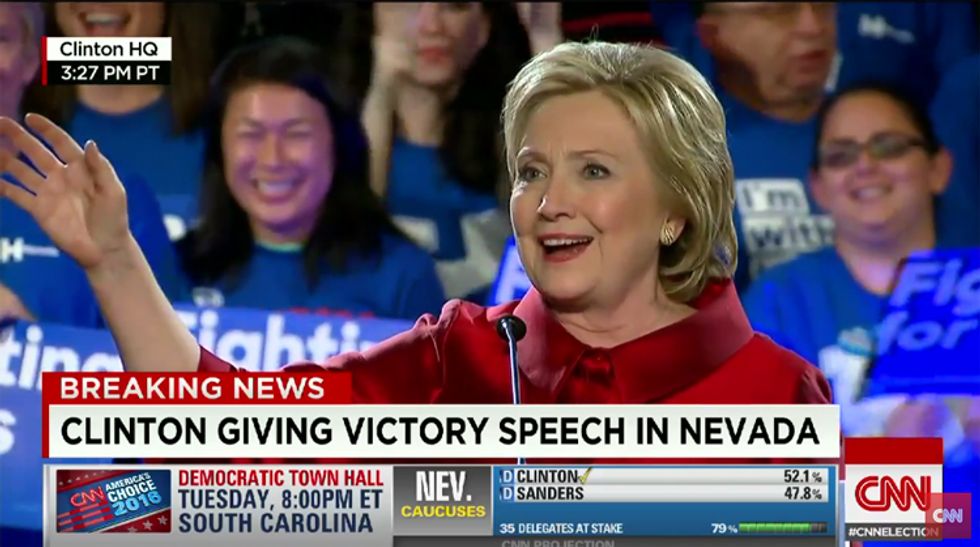 Honestly, we can't stop watching the lady in the 'Educators for Hillary' shirt behind her. She's just thrilled to be there.

[contextly_sidebar id="4EytO0CmzZs7x08njXLi6ETJb5DHiHJ9"]The people of Nevada and South Carolina have spoken, or at least the people in the Democratic and Republican parties of those states have, respectively, and the message is clear: Nobody likes Jeb Bush, so he's taking his exclamation point and going home. Also, some other people got voted for, too, like Hillary Clinton, who won the Nevada Caucuses in something of a squeaker, with a tally of 52.6 percent over Bernie Sanders at 47.3 percent, or at least so the New York Times would have us believe. Yr Wonkette will now brace for the inevitable complaints that we're in the tank for Hillary because we put her picture at the top of the article, merely because, technically, she "won." Mostly we're just relieved that we won't have to listen to MSNBC's Brian Williams in the South Carolina Electionplex making lame jokes to Chris Matthews, stuck in a chair in front of that stupid Las Vegas model of the Brooklyn Bridge. Here is your Hillary victory speech, which after a day of cold pills and watching election returns left us thinking, "ooh, shiny!" Yes, this is shallow of us. But we like this Space Ambassador look she's been going for lately.

Also, here is your Bernie Sanders concession speech, which is as they say the "gracious" and also the "feisty," and let's not count him out, because here he is coming in only five points behind Hillary in a state that isn't all pasty white people, so that counts for something. As you all know, Wonkette is completely in the tank for Bernie, and so we're desperate to find any crumb of solace in his loss. It's Bernie, so you kind of know what he'll say: rigged economy, top one percent, and also momentum. Bernie's pumped for South Carolina. Bernie is excited about "bringing working people and young people into the political process in a way we have not seen for a very long time," by which he means since 2008 probably, and then look at how those young layabouts deserted the process in 2010 and we got the Tea Party, damn kids, I tells ya...

[contextly_sidebar id="a3lfmS7v8DWOPO2xHwyfzQ2nwv1MLBPV"]Best of all, Bernie does not go on for a half hour like he did after New Hampshire, so yay for the political bloggers who are too hopped up on store-brand Ny-Time Cold & Flu Caplets to try and follow any of it! Seven minutes of fapping is all the Bern you get.

Now, please shift the soundtrack from "Happy Days Are Here Again" to John Williams's "Imperial March" from the popular Star Treks movies, because it is now time to talk about South Carolina. If you have any spray paint handy, you may wish to huff it right now. Donald Trump won South Carolina and gave an insufferable Donald Trump victory speech which we will not even look for video of because we love you and don't want to completely ruin your Sunday morning. Trump got 32 percent of the vote, with Marco Rubio and Ted Cruz both getting some fraction around 22 percent each in what was almost a tie for second place, but ultimately had Rubio taking second. Considering how he treated third place in Iowa as if he'd won, we should assume Rubio's already making plans for redecorating the Oval Office, perhaps in a nice décor based on Fritz Lang's Metropolis.

Trump, for his part, couldn't get through his victory speech without lying like a lying liar, which is so completely the norm that the only question is "Gosh, what is Trump lying about this time?" Let's see if you can catch the slight deviation from the truth here:

“I have thousands and thousands of Hispanics… I lead with the Hispanics. I’m leading in every poll with Hispanics,” Trump said. “They love me, I love them.”

Or maybe he's a little less popular with Latinos, like having an 80 percent unfavorable rating in a November poll. From a certain perspective, we suppose that could be seen as "leading" with The Hispanics, in that they can't stand him the most, so why quibble over little nuances of meaning?

It is believed that some votes were also cast in South Carolina for John Kasich and Ben Carson, although we would warn our readers against believing every fool thing they hear on the TV. Actually, Carson continued the blithe denial of reality that we've come to loveloathe him for: In his speech announcing his sixth-place finish, Carson said:

There are news people here who think I'm going to make a concession speech. This is a just the beginning speech.

[contextly_sidebar id="GmPLcgvSvPciLUkfo9kUxbNgyB6Vhd0B"]You be you, Ben. You can accomplish anything with a dream and some phony nutritional supplements! Carson also pointed out a thing that was true, as captured by New York Times reporter Jonathan Martin:

Since it looks like Trump will wrap up all 50 of South Carolina's delegates, he's got that one right. And now it's time for him to get started, and to dream the golden dream.