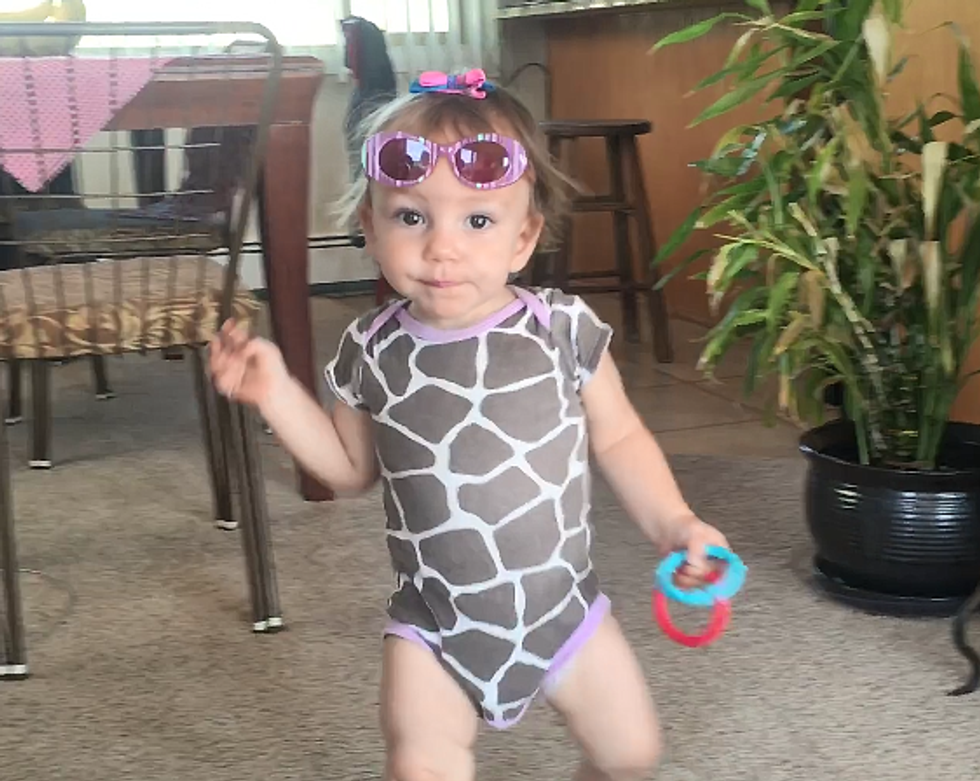 Hola Wonkers and good morning, it is Saturday and it's time to review what we have learned this week. Have we learned many, many things? Are you ready for the pop quiz? Well don't worry if you are not, because this is the post that has the top ten posts of the whole last week, so you can review them before the test! But first, we must direct you to this video, of Wonk Baby Donna Rose SINGING THINGS AT YOU. It is your new favorite thing, along with the screengrab we got of the video, posted above, which is the best.

OK let's do the top ten stories, but before we do that may we ask you, if you love us, won't you toss us $5, $10, or $25 as a special love gift? It is the easiest. You pull out your wallet and you give us money. OR you could just do one of our "ad-fewer" subscriptions, where you only see in-house ads, like the static ones for our t-shirts or whatever and that's it, and in exchange you help us out with "dollars" on a monthly basis, and we help us out by feeling less guilty about all our crap ads, that you won't see!

Here, while you decide, it is the traditional picture of Wonk Baby as a scary lion:

1. These bigot diners were probably just being brave when they refused to tip a server they mistook for a foreigner.

2. That poor, thin-skinned poopy-pants named Donald Trump did MORE poopies in his diapers, because the "Morning Joe" people were mean to him.

3. Rush Limbaugh was furious when he figured out how Obama is creating a secret army of lesbian farmers to destroy America.

4. Awwww, that Republican Rep. Sean Duffy, who used to be on "The Real World" got laughed on the television, for being A Idiot.

6. Donald Trump's campaign manager Kellyanne Conway went on the Rachel Maddow teevee program. It did not go so well for Kellyanne.

7. Have you seen the great new ad from the Democrats, where they just read Breitbart headlines? It's a GOOD AD.

8. One liberal website ate shit apologizing to Donald Trump for posting about that Daily Mail story that said maybe Melania Trump was an escort in the olden days. Another liberal website was a HERO when it apologized.

9. Donald Trump showed up for a photo-op in the Louisiana flood zone after the governor told him to stay the fuck away, because he cares.

10. And finally, last week's Deleted Comments was about what a pathetic dumpster hack Dinesh D'Souza is. Enjoy!

So there you go. Those are your top ten most clicked upon stories. They are very good stories!

OK, Wonkers, you have one task left, and it is an important one. You need to sign up for clean wind and/or solar from Arcadia Power. It takes three minutes and THERE IS A FREE VERSION. Why is it free? We don't know, maybe they want to bogart the market or something. If you pay the power bill at your house or apartment, you can use Arcadia Power, no matter which terrible PG&E services your hood. The EPA says it works, you will help stop climate change, and your Wonkette gets a small cut! Let's help you help us help the earth! (And us.)

Oh, and sign up for our newsletter RIGHT NOW DO IT NOW WHAT ARE YOU WAITING FOR? Sorry, we guess that was a second "task."

You are so good, you get more baby pictures.

And one last one, at the Lake County MT Democrats Picnic, with special guest Crabby Donna Rose! And also Hildebeast Clinton!