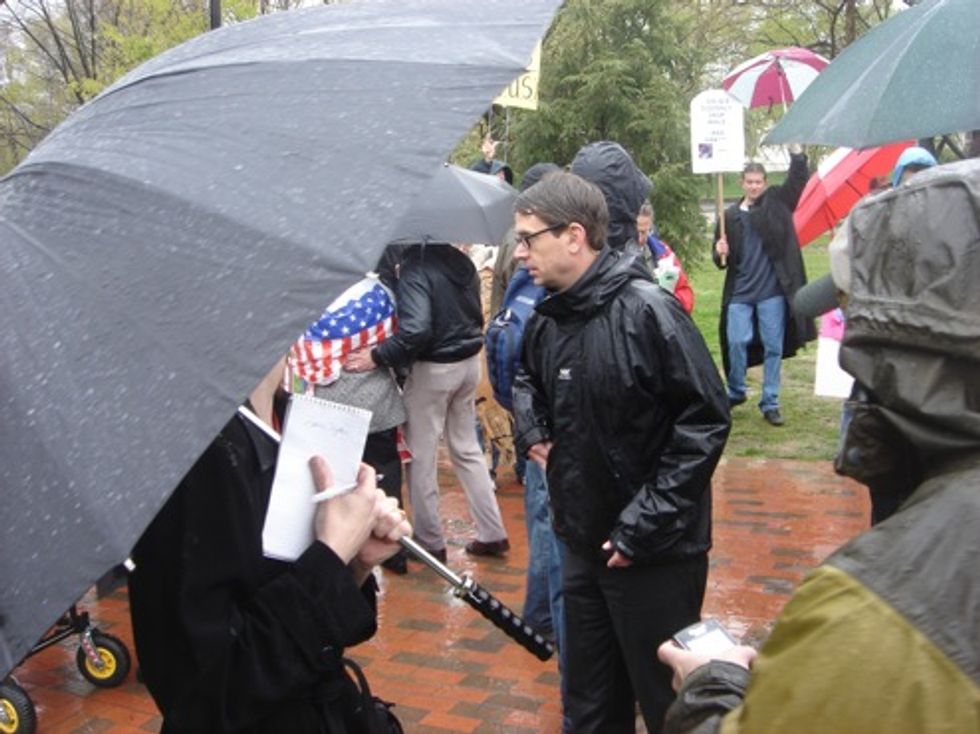 Before starting out on our latest miserable journey into this muddy Randian hell, may we just NOTE that we have noticed various folks on the Internet writing about how lame and trite certain blogs are for covering the Teabaggers only because of that silly sexual double entendre, which is now a dead joke. Indeed it is a dead joke! It's been dead for weeks! (Although certain incidents do bring it new life every now and then.) But we would call them "Teabaggers" even without the sexual innuendo, because it is a hilarious movement based around tea bags, so yeah, "Teabaggers." This is the Republican Party now! There is much more fuel to this thing than a simple sex joke that OMG old people don't understand! Anyway... ha ha, testicles. Let's look at some pictures of human testicles!

We had an awkward encounter with this very famous Griff Jenkins.

After wading through a sea of mud to reach the nothing on the other side, we saw these Fox News equipment bins, with a River Cuomo clone casually guarding them. (PSST: WE WANTED TO STEAL THE BINS!)

We tried to spark a conversation with this lonely Fox News Equipment guard and asked, completely earnestly, "So are any famous Fox personalities going to show up today?"

He was silent for a few seconds and then mumbled something about Greta maybe coming later, but with the rain and the cold, ya know...

Like our grandparents always told us growing up, Microsoft Word word art is one motherfucker of a profound technology.

Ha ha, you bet he is! He's a dandy French sally, says the guy who puts a protective plastic bag over his protest sign.

Hmm "dignity" is tricky though! It's intangible and subjective!

Here it is, the official contest entry from the Vegas oddsmakers' favorite, the Freepers. Went through a whole bunch of ideas, settled on ol' comedic standby Steve Urkel. Would it be enough?

Nope! Here was the "funniest" entry, the one that really lived up to our (admittedly inflated) hope for comical conspiracy slogans and mid-level racism. This guy, we decided he was the one to waste our annual Wonkette Journalistic Interview on.

Rats! We should have expected that intrepid blog reporter Dave Weigel would already have nabbed him, since it is his job to interview violent psychopaths. ONE OF THESE DAYS, WEIGEL!

Oh that's Laura Ingraham, trying to cut through the peasants as fast as possible.

If you ever go ahead and record that solo album, Griff, here's your cover shot.