2013: America's Most Fabulously Gay Year Ever 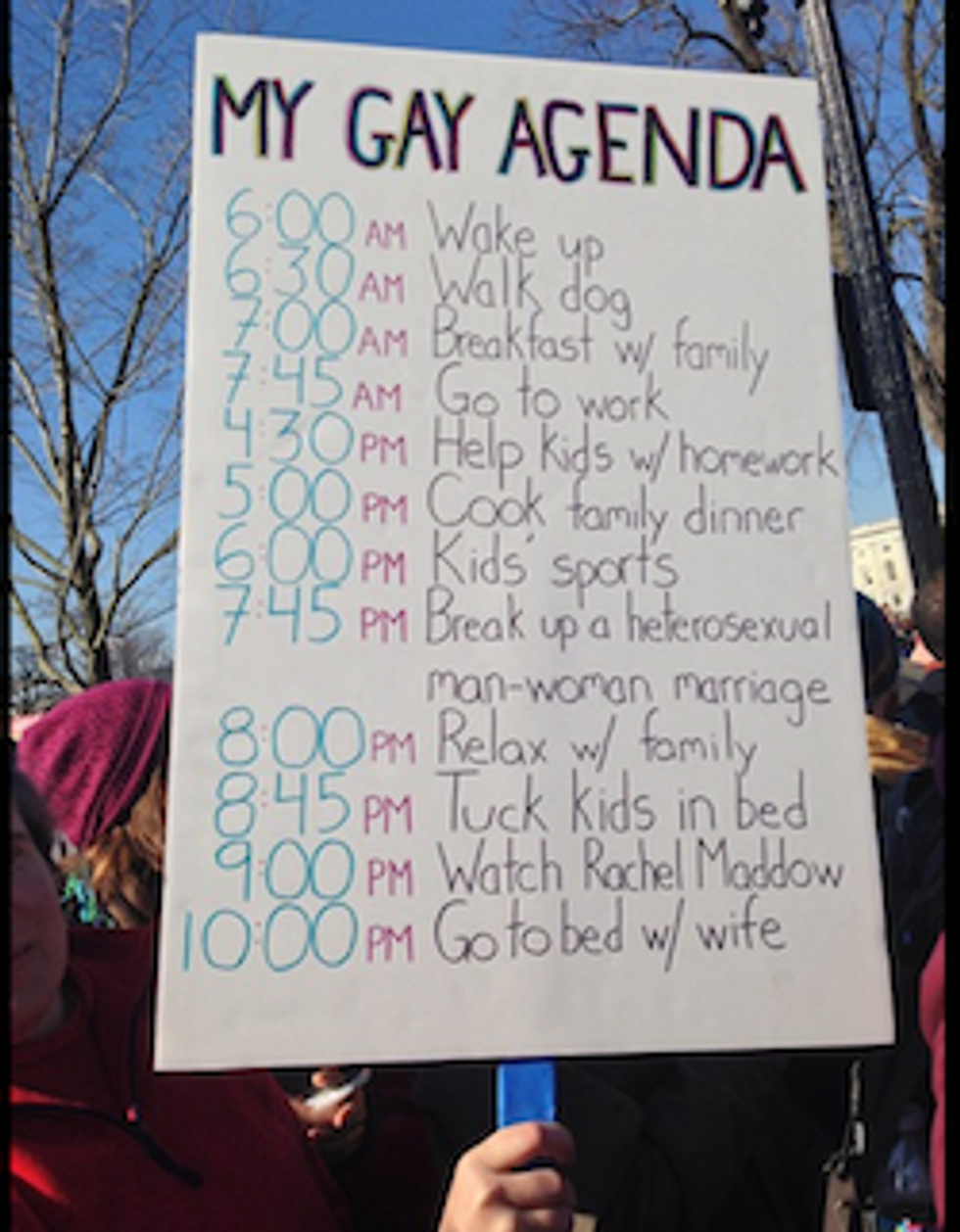 While there are still a few (like, five) Real Mericans (and most of them are on some stupid teevee show about making duck-sex sounds) who are unaware that is the year 2013 for a few more hours (then it will be 2014, for those of you who have trouble counting, you're welcome), and they think The Gay AgendaTM is ruining our freedoms and our childrens and making Jesus cry -- like, for example, this one lady idiot in San Diego who is warring on the Rose Parade because FOR THE CHILDREN -- it turns out that America went totally full-on gay homosexxxxxxican gay this year, and it is FABULOUS.

How fabulous? A whole bunch of states legalized gay marriage aka marriage (or had it crammed down their throats by dirty hippie liberal activist judges like Justice Anthony Kennedy): Maryland, California, Delaware, Rhode Island, Minnesota, New Jersey, Hawaii, Illinois, New Mexico, and Utah. Yeah, that's right. Motherfucking Utah. Yeah. UTAH. And sure, the governor and attorney general of Utah are still scratching their heads -- to the tune of $2 million, which broke-ass Utah cannot exactly afford -- on how to STOP THE GAY, but so far, they got nothin'. They say they are planning to beg the Supreme Court to save them from the gay, and we are planning to laugh very hard when the Supreme Court tells them no. So welcome aboard the gay train, Utah.

In Illinois, the gay marriage aka marriage law does not actually go into effect until June 2014. But a very nice judge who is An Ally ordered the immediate issuance of a marriage license to a lovely couple, one half of which has terminal cancer (sad) and may not have enough time to make it the June 2014 date (still sad), so the judge was all, "Here, you can get gay married RIGHT NOW and mazel tov!" Awwwww (but sad because cancer) but awwwwwww.

And speaking of judges ...

Former Supreme Court Justice Sandra Day O'Connor presided over the wedding of two men who wanted to undermine the sanctity of opposite-sex marriage by having the legal right to fight over who has to unload the dishwasher. But she was just copy-catting Justice Ruth Bader Ginsburg, who earlier this year officiated the wedding of Michael M. Kaiser and his partner, who happens to be named John Roberts. (No, not that John Roberts, some other John Roberts, but boy, that woulda been funny if it had been that John Roberts, but it was not.) See, all the cool justices are doing it!

But the gay wedding fun is not just for justices. Oh no. Former President George H.W. Bush and Beautiful Mind Babs were the witnesses at a lesbian wedding, where the most shocking thing was George's bipartisan mismatched socks.

Meanwhile, President Bamz is exporting some of our finest gays to the Sochi Winter Olympics, like Billie Jean "Super Fucking Awesome" King and also recently out-of-the-closet Brian Boitano, to get all up in Vladimir Putin's face and be all, "How do you like them gays, huh?" Oh, backasswards gay-hatin' Russia, YA BURNT!

Brian Boitano was hardly the only gay to announce his gay. Pretty much everyone came out of the closet, even people we did not actually know were still in there. Good Morning America's Robin Roberts Facebooked her gay. And Jodie Foster, who did not say "I am gay" but just "I'd like to thank the lady what I sleep with" so we deduced with logic that meant gay. And Wentworth Miller (sorry, ladies). And Mario Bello (sorry, fellas). And Jason Collins. And Tom Daley (oh, wait, he is a bisexual, so we all still have a chance, hooray!). What does it mean? Not much, since no one's life is actually affected by some other person being gay. But still, it is a nice thing when gays can feel free to be all "Yup, I'm a gay," and it's not even a big deal.

Perhaps most importantly, the Supreme Court issued two -- not one but TWO -- rulings that said (we are paraphrasing a bit), "Jesus fucking Christ, it is 2013, who gives a fuck if you want to marry a person you love even if they have the same genitals that you have because Jesus fucking Christ, fuck OFF with that nonsense and shove your DOMA and your Prop 8 right up whatever orifice is your preference because this is America, goddamnit!"

What does it mean? It means that while whiny-ass tittybabies who still live in the pretend make-believe world where there is no gay keep lawsuiting to stop the gay, we can feel pretty confident that if any of those lawsuits reach the Supreme Court, the justices, in their occasionally infinite wisdom, will probably tell those whiny-ass tittybabies to a) see their ruling on DOMA; b) see their ruling on Prop 8; and c) get a new fucking hobby because America is gay now. Deal with it.