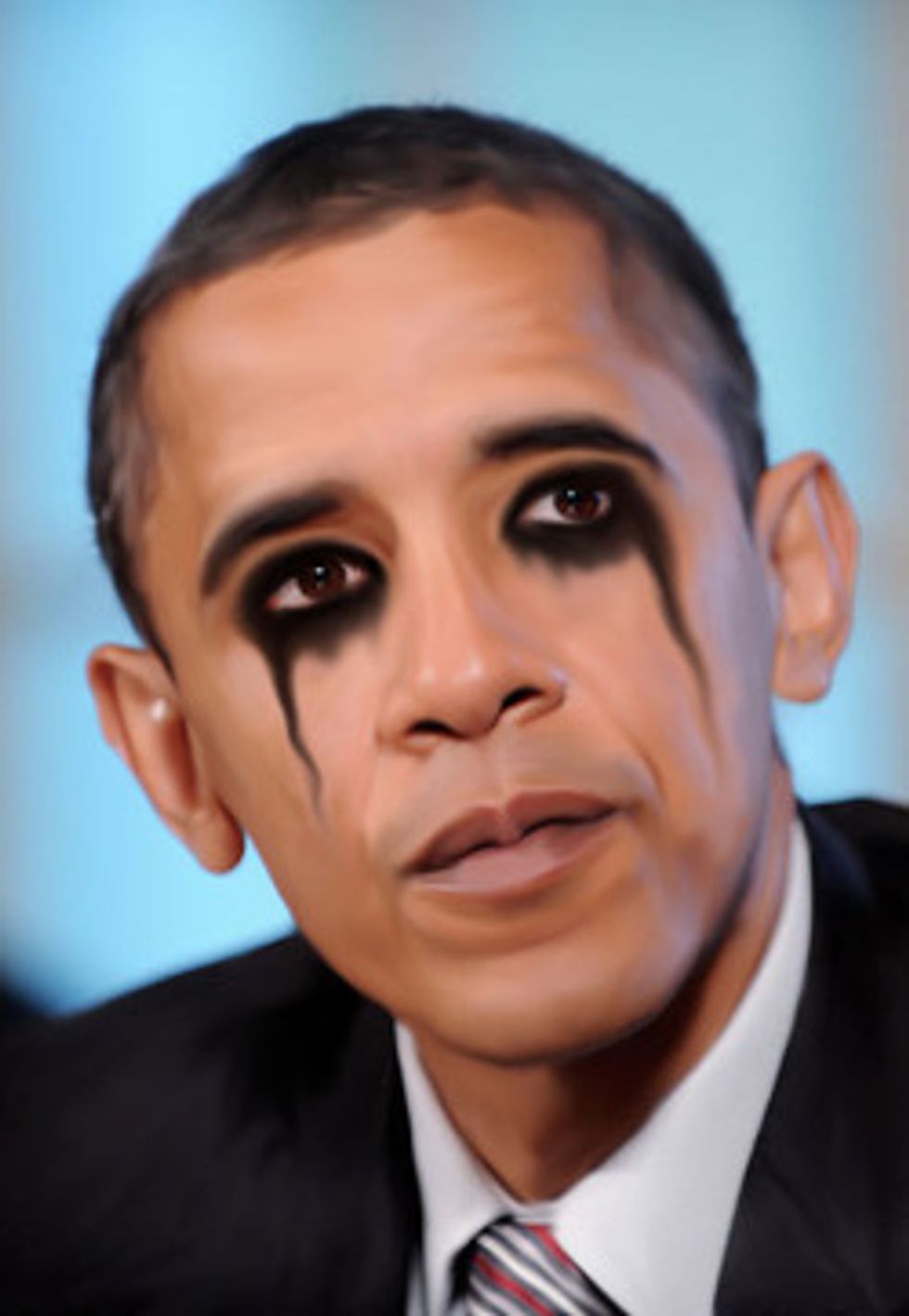 Once upon a time we loved our preznit. We were so proud of him, partly because "awesome black guy" but also many other sterling qualities besides awesome black guyness, like "constitutional law professor" and "really smart" and "a moral person who is moral" and also "thoughtful and nuancey stuff" and "did kind of shitty Third Way things like 'not single payer' but then he would give a speech explaining it and he would actually talk more liberal than he was and who ever even bothered to give lip service to liberalism in the past 20 years not Bill Clinton that is who-not and yay lip service, and you want me to buy Romneycare? For liberalism? Sold!"

Now, some of you -- we are looking at you, PaleoEmoProg -- already did not love the preznit because of "drones" and "capitalism" and "arglebargle Ralph Nader." Some of you are Millennials, and you have hardened your hearts to your President Slickness. We fold you into our arms, like your mom, because of how we are actually your mom. It is awful to start your grownup life (hahaha you will never be "grownup") knowing that you will never get a motherfucking j-o-b because of something the banks did. We would be angry bitter shiftless layabouts too! You may also be mad about the NSA stuff, which is sort of hilarious as you are the generation who invented showing your ass on the Internet. You are probably also ALSO mad that you have to buy health insurance, which is cute because six months ago you were busy being very Not Mad about getting to stay on your parents' insurance through the age of 26. So we guess you must have turned 27 now.

But we come not to bury Bamz (get it?) but to praise him. We truly believe -- Trigger Warning for "sincerity," gross -- that our Smoove B. will go down in history as one of our great presidents, and not even for the same reason he got the Nobel Peace Prize, i.e. "not George Bush." No, the Obamacare Rollout of Misery and Lameness, for which Kathleen Sebelius and Barry never gave the Republicans the credit they properly deserved, will be forgotten, and Bamz will be a new FDR who brought us into the rest of the world's early 20th century. You may even remember that he did some other cool stuff too, when he actually had a Congress that wasn't digging for China up its own ass. That first hundred days of the Pelosi House? Yeah, they solved global warming three times before breakfast and then had time to go get a pedi. Fightin' Harry Reid? In that first Bamz Congress, he managed to wrangle a Senate that included Democrats from Nebraska.

It is not Barack Obama's fault that half of this country has been taken over by lunatics (ABLEISM). Stop blaming the victim (RAPE CULTURE). Get a little love back in your heart, put out your hair (it is on fire) and take a motherfuckin' yoga breath. Imagine the backs of your eyeballs or something, we don't know, Downward Dog! Dragon Crazy Face! Take the long view, and work on getting Bamz a Congress that isn't actively farting on him, for Freedom.