2014: The Year Of Terrible Science From People Saying 'I'm Not A Scientist' 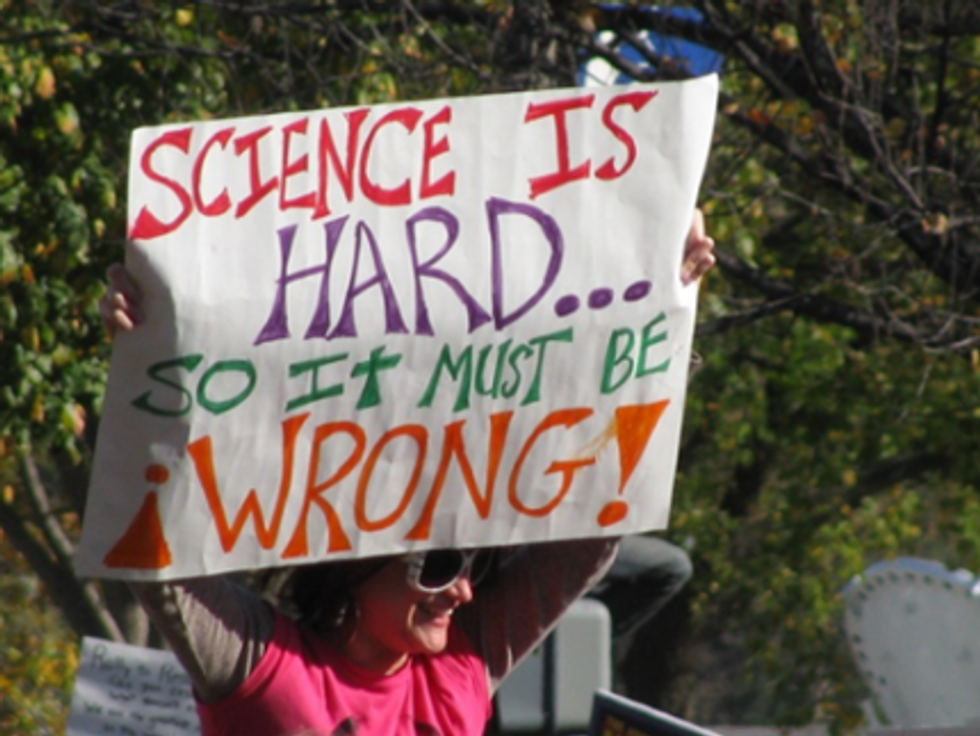 We know that politicians actually started saying "I'm not a scientist" well before 2014 -- Marco Rubio adopted it in 2012 when asked how old the earth was -- but this was definitely the year it became Republicans' go-to strategy for avoiding journalists' questions about global warming and/or evolution. On matters of climate, it's a fine supplement to the previous favorite dodge, "I believe the climate is always changing." And what a fine year of not-science the Right has given us!

The House Science and Technology Committee, a bastion of non-science for years, kicked off the new year by choosing one of its climate deniers, Arizona’s David Schweikert, to head the subcommittee on environment. Schweikert is a nice fellow who likes to call global warming "folklore" and to attribute climate change to a "natural cycle."

February brought us Fox News science expert Charles Krauthammer, proclaiming that Barack Obama was doing bad science when he said in his State of the Union address that the reality of global warming was factual, a settled matter of science. Not so, said Krauthammer:

Really? There is nothing more anti-scientific than the very idea that science is settled, static, impervious to challenge.

After all, any day now, it's quite possible that gravity will be disproven and we'll all go floating off into space. We also heard from a Utah legislator who warned that we shouldn't try to slow the amount of CO2 that we're pumping into the atmosphere, because CO2 has what plants crave, and besides, back in Dinosaur Times, atmospheric CO2 was pretty high, and we were all just fine back then.

And of course, one of the biggest science stories of the year -- still good for laughs -- came when Bill Nye "debated" Ken Ham, the founder of the Creation Museum. Never mind that the reality of evolution is not really up for debate; the Science Guy stuck to his guns and took the alleged topic of the debate at face value, drilling straight into the question: “Is creation a viable model of origins in today’s modern scientific era?” Allow us to summarize his detailed answer: Nope. Needless to say, there was a drinking game.

Nye really enjoyed his new round of celebrity, and went on to needle climate change deniers and young earth creationists for the rest of the year too. He even turned the Creation Museum weirdness into the basis for a book, Undeniable: Evolution and the Science of Creation, which you can buy with your money, some of which will kick back to your Wonkette. We like us some Bill Nye!

Also in the spring, a National Science Foundation poll found that Americans are scientific ninnies, proving Dave Barry's point that the one thing America is still good at producing is surveys finding that Americans are pretty stupid. Steve Stockman (now a former congressmoron from Texas, hooray) explained that climate science and astrology are both junk science, which we imagine gave Nancy Reagan a sad, and he also vowed not to give in to liberal curly-lightbulb tyranny. Wyoming proudly rejected a new set of nationally-endorsed science education standards because they were deemed too unfriendly to coal. And it turned out that, thanks to education voucher programs in several states, a fair chunk of taxpayer funds went to teaching creationism, the Establishment Clause be damned.

Not everything was terrible, however! In South Carolina, terrible jerk creationists finally dropped their attempt to include quotations from the Book of Genesis in a bill naming the Wooly Mammoth the state fossil, an especially cool win for science education since the bill had been proposed by an awesome nine-year-old girl. And a Georgia high school dropped its threat to discipline another nerdgirl who had besmirched her official yearbook entry with a mildly saucy joke involving the Periodic Table of Elements. And on the teevee, Neil deGrasse Tyson brought back Cosmos, and we recapped it, and now it's on the Netflix if you missed any of it.

Science took a serious hit in the fall, as Ebola suddenly became the panic du jour, and wingnuts fell all over themselves trying to prove who could be more afraid of it, for the public good. Was there vast stupidity about fairly basic questions? There was! For one thing, we learned that sending the military to Africa to help build treatment centers was a terrible idea, because even though the American military machine is awfully good at moving people and equipment and getting emergency infrastructure into place, Obama is dumb because any fool knows you can't shoot a virus. On the other hand, you can shoot people who are infected, so "pro-life" sociopath Todd Kincannon called for the humane execution of everyone with the Ebola virus, followed by cleansing their villages with the holy fire of napalm. Strangely, he didn't specify whether all of Dallas would need to burn, or just certain neighborhoods. Also, the governors of New Jersey and Maine competed to see who could be the biggest dick about Kaci Hickox, the nurse who did not have Ebola. Then the elections happened, and Ebola was no longer a threat.

The fall also brought another round of climate derp, with Gov. Bobby Jindal, a creationist, wondering why Barack Obama denies the science of burning fossil fuels as fast as possible, for prosperity. Indiana congressdolt Larry Bucshon bucked the "I'm not a scientist" trend and just straight out proclaimed global warming a hoax, perpetrated by scientists who want to get rich from all that sweet, sweet grant money. Michigan Rep. Dan Benishek went Bucshon one better and explained that, as a surgeon, he is a scientist, and by gum, he hasn't seen a single bit of peer-reviewed science to prove this crazy global warming thing. You know, in the surgery journals. And Paul Ryan explained that not only is he not a scientist who can say one way or the other whether the climate is changing due to human activity, neither are scientists, because really, what a bunch of nerds.

And finally, let us not forget 2014's greatest rightwing contribution to science: guys with big diesel pickups deliberately tuning their engines to blow thick smoke into the faces of bicyclists and Prius drivers, proving once and for all that climate change is a hoax invented by wimps. It's called "Rollin' Coal," and it's the technological equivalent of giving Greenpeace a wedgie.

We'd hate to leave you, dear Wonkers, with a faceful of soot, so instead let us close on this nifty story of someone who actually is a scientist, Dr. May-Britt Moser of the Norwegian University of Science and Technology’s Kavli Institute for Systems Neuroscience. Moser was one of the three co-winners of this year's Nobel Prize in Physiology or Medicine, for her co-discovery of "grid cells" in the brain -- cells that help animals (including us) understand their orientation in space. To celebrate her prize, she attended the award ceremony in a dress decorated with images of grid cells:

Neurology meets couture! And thanks to her grid cells, she didn't get lost on the way to the podium -- and as it turns out, after the awards ceremony, the dress came in handy as Moser used it to explain her discovery to journalists.

Let's see some guy on the House Science Committee try that.