2016: The Year The Palins And The Duggars Bored The Everloving Sh*t Out Of Us 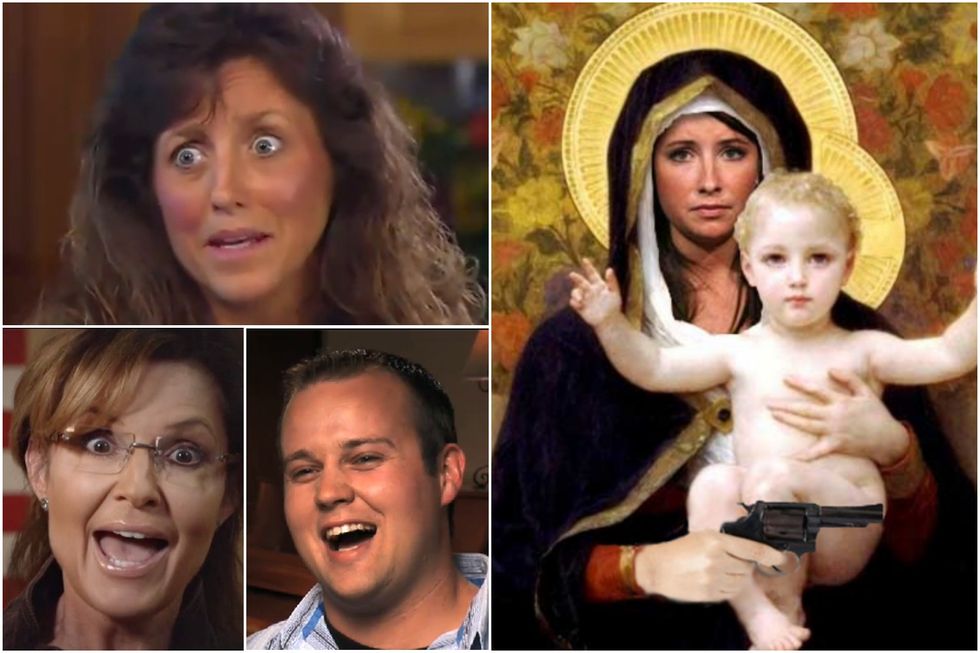 We are sorry for how awesome this picture is.

WHAT THE HELL, 2016? Last year, one year ago today, on New Year's Eve, we had a whole roundup post on WTF was up with the Duggars, and also a thing about Bristol Palin, and oh boy, they were just too fun to write about during the year 2015 (cough PAGEVIEWS! cough). Oh sure, we had a post on Bristol being a big angerball just yesterday and it was fun, but she's all tradtional married pregnant now and just not that fun. :(

And yeah, we guess without a big election going on, and with Josh Duggar having a child-fingering scandal, 2015 was primed to be a lot more Duggar-licious than 2016, but ... meh.

Let us briefly look at a couple of the times these two woebegotten families actually got off their asses and did a stupid thing in 2016, and then let Facebook commenters ask us why we are making stupid people famous, because Wonkette is who did that, as we control both TLC and John McCain's 2008 campaign.

Oh Hi Sarah, Are You Feeling All Right?

Sarah Palin started her year by selling her Arizona sex pad, which was tacky and had a wall-hanging in the kitchen that said, "GRIT," which is actually not how you spell "GRIFT." But later that month (January) she endorsed Donald Trump, because also too #reasons and like such as! Maybe 2016 would be good after all! She sure seemed happy about it when she did her endorsin' speech! But it turns out things were NOT going so well back at the Palin Homestead in Wasilla, as her older son Track was arrested for beating up his girlfriend. Eek. AND we found out about Track's PTSD and also that he might be suicidal, which really made us wonder why Mama Grizzly was still on the campaign trail for Trump, blaming Obama for her son's problems, dontcha bet.

In March, Todd Palin busted his fanny on a snowmobile and had to go to hospital, so Sarah immediately stumped for Trump one more time, before going back to Alaska to give Todd spongebaths on his nekkids.

In April, Sarah blew her bumpit in glee when Ivanka Trump's Orthodox Jewish baby was born on the traditional Orthodox Jewish holiday of "Easter." Oh, and she had a fight with dumb rapper Azealia Banks about whether it's OK to wish rape upon Sarah Palin. (It is not! We agreed with Sarah Palin, for once!)

In June, she rambled like A Idiot about the Orlando shootings and was so thrilled by Brexit that she rode a moose through Wasilla topless, ALLEGEDLY.

In July, she did NOT show up at the Republican convention, but most of Track Palin's charges got dropped, so ... ???

And then in August, she banged her own noggin, and we were sorry, because we don't like to see Our Sarah in pain. And then she sort of just disappeared until after Trump was elected, and she started expressing interest in quitting a cabinet position halfway through. That wish does not seem to have been granted, but she was jazzed enough about Trump's defense secretary pick to scream "HOOHAH!" at the sky, like all Marines do.

Let's see, what else ... Oh, she did some grifting in 2016, but that goes without saying. We learned she might get to grift by being a half-term TV judge like Judge Judy, but we guess she quit that too, because we ain't heard another thing about it.

Sarah, you were kind of boring this year, but we sincerely hope your family is doing better, because you all seem to have been going through some shit. We need our Palins healthy and happy, so we can LOL at them guilt-free!

Bristol Palin's year got off to a different start when she, a single mother, got sued by Dakota Meyer because he was pretty sure he, and not the Lord, was Sailor Eggnog Palin's baby-daddy. But we guess they resolved it, because they are married in the eyes of the Lord now and she is preggers and stuff, so we wish those crazy kids all the luck!

Otherwise, she seems to have spent most of the year half-assed-ly "working" at her blog, writing dumb shit about guns, saying that Breitbart lady who got assaulted at a Trump rally was a total pussy, and penning a polemic on transgender folks, based on her own experience with who has a penis (Dakota) and who has a vagina (Bristol).

She probably did other things this year, but we don't care. Go read her "blog" if you're into that sort of thing.

Hey Duggars, All The Christian Sidehug Boning Going Well? Any New Courtships? Josh Keepin' His Hands Where The Lord Can See 'Em?

If you're a Duggar fan who's been in a coma all 2016 and are coming to find out every little thing your favorite family did this year, you are NOT at the right place. Because honestly, unless you are an actual fangirl of them, they didn't do that much that crossed over into Wonkette's wheelhouse. Oh, there was a season of "The Duggar Kids But Not Josh: BANGIN' ON!" and Snipy tirelessly recapped it. (Here's one! Here's another one! What about this one?)

As we remember, the show was mostly about Jessa 'n' Ben trying to figure out how to be parents without setting their baby on fire by accident. Or something.

Then there was the ongoing leakage from the tail end of Josh Duggar's kid-and-lady-touching scandals. GOOD NEWS! He was released from Jesus Penis Rehab in March, becaused #washedintheblood. BAD NEWS! The same month, one of the Duggar boys, John-David (who is in a courtship now, PRAISE HIM!), was still blaming his brother's Finger Sins on "The Devil." MOAR BAD NEWS! In July, Josh was totally not sorry, because, again, "The Devil." GOOD NEWS! In September, Ma and Pa Duggar announced that Josh had been redeemed from that time Satan put boner ghosts in his underwear, so we guess it's all OK now.

As to the other children, we learned in the summer that Jill and Jessa Duggar just mighta had been planning their pregnancies like common sluts, instead leaving it up to the Lord's will when a baby would get stuck in their bottoms. Were they rhythm-methoding?! Did they shyly give the neighbor kids a dollar to go buy them a bunch of rubbers? DID SOMEBODY EAT SLUT PILLS? We do not know. Anyway, they are both pragnet right now, but we don't think they did any Synchronized Duggar Fucking to make it happen, so we guess they can still go to heaven when they die.

The Duggars have like 94 other kids, like Jinger and Jiffany and Jarbara and Chuck or whatever, but we don't know what is happening in their lives because we don't care. Maybe a courtship or something, for Jinger? Meh, Google it yourself.

ALL OF THEM KATIE.

But we guess if we had to choose one family to keep around and one that needs to sashay away, we'd say we'll still cover the Palins in 2017, because LOL. The Duggars can eat rocks for all we care.