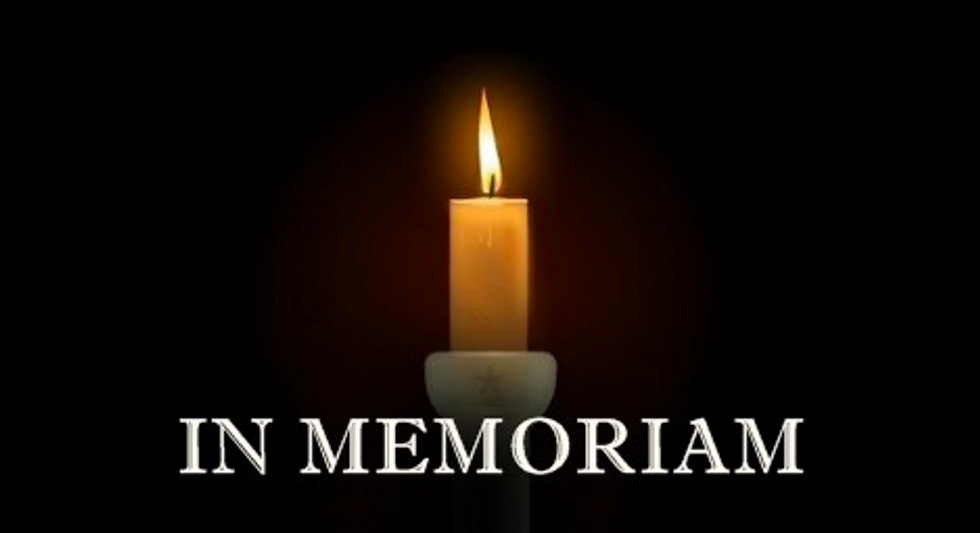 This year, like every year since people started being born, a lot of people died. It has gotten so bad for famous folks since 2016 that we are already sick of people saying "saw (fill in the blank) trending, didn't know if they were dead or a pervert." But yeah, that happens a lot, so here is a list of folks who are in fact deceased, and only a few of them were also rumored to be that other thing.

Happily, some notable people are still not dead, but if anyone makes one of those Keith Richards jokes, you are automatically banned. Haha, just kidding I can't do that, but for real, be more creative! And hold on tight Betty White, we love you.

Anyway, here is a list of some of the people we could think of who were both famous and then dead in 2017 -- including mostly a LOT of musician types, and a whole lot of men. It appears that those who did not die at 27 years old have started falling off at a rapid pace. Hopefully an important person has been left off this list so that you can be righteously indignant that they were forgotten, like how people do about the Oscars. Please yell about it in the comments.

HAPPY NEW YEAR! Can't wait to see who dies next.

Mary Tyler Moore. You know who she is. One of the first women to have a show about having a career instead of a husband or family. It is sad that she has died. We must now hold on to Marlo Thomas that much tighter.

Chris Cornell. Terrible. Suicide is always terrible and I like to think he was doing autoerotic and it got out of hand. Amazing singer, a part of every grunge band there ever was, especially Soundgarden, Temple of the Dog, Audioslave.

Tom Petty. Still verklempt about this one. Talk amongst yourselves. Tom Petty is one of those people that when you start trying to listen to all of his music you love it takes like 6 hours and a whole bottle of bourbon. American Girl in Silence of the Lambs is one of the creepiest soundtrack usages ever.

Gregg Allman. Macon, Georgia's Allman family's second best musician (fight me). Gregg managed to outlive his brother Duane by 46 years simply by staying off a motorcycle, but still doing all the drugs, and getting married SEVEN times til his liver finally gave out.

David Cassidy. Glad it wasn't Shaun, but a lot of people loved the Partridge Family, and this guy in particular, a real lot.

Mel Tillis. He was famous in the '70s for having a severe stutter, and singing country songs some people actually really liked.

Jerry Lewis. SUPER famous, did a lot of good charity work for kids, member of the Rat Pack, and it's weird how much Milo Yiannopoulos looks like him (seriously, no?).

Glenn Campbell. Sang a song about working for the power company that was pretty famous in the '70s, and also this one. Really good at drinking.

Pat DiNizio. Honestly did not know this guy was dead til I started doing this list. But who doesn't love the Smithereens? Pat DiNizio became some sort of New Jersey politician as well, which is odd. Their '88 show at Jacksonville State was fantastic.

Jim Nabors. Gomer Pyle was from Alabama, had a crazy, fairly high pitched, country speaking voice and beautiful baritone singing voice. Married his husband in 2013, just about as soon as it was legal, after having been with the man for 38 years.

Fats Domino. Sold more than 65 MILLION records. One of the first Rock and Roll Hall of Famers, also had terrible anxiety.

Robert Guillaume. Benson. He was also the mayor on Seems like Old Times with Goldie Hawn, ever seen that one?

Harry Dean Stanton. Quite a prolific actor, but come on, he's gonna be Andie's sad dad from Pretty in Pink forever.

Frank Vincent. Most of the Italian movies and TV shows you have ever seen including Raging Bull, The Sopranos, Casino, and Goodfellas, where he was stabbed in a trunk with some of the best sound effects ever

Sam Shepard. That hot guy who played Chuck Yeager on The Right Stuff, was also a well regarded, multiple award winning playwright. He also dated both Patti Smith, and lived with our forever hero Jessica Lange for more than 3 decades and they had kids together.

Adam West. Oh no, the Mayor from Family Guy, said millennials everywhere as I scream BATMAN and slap them repeatedly.

Bill Paxton (not Pullman, which will never not be confusing). But still, first and foremost he was Chet from Weird Science and he also did that Tornado movie with Helen Hunt, and a bunch of other things, while definitely not being Bill Pullman.

Hugh Hefner. He probably lived long enough, what the hell else did he have left to do?

Della Reese. Touched by an Angel, sure, but mostly MY PINKY TOE! This lady more than held her own against Redd Foxx, Richard Pryor, Eddie AND Charlie Murphy.

Charlie Murphy. Responsible for one of the most iconic moments of teevee in the '00s. Made Rick "Habitual line stepper" James famous again until he too died sometime after this video.

Chuck Berry (literally thought he had been dead way before now, seriously what happened? Y'all think he really watched people pee? Also SPY magazine ruled so hard). Anyway, Chuck did some terrible stuff in his personal life, but also wrote some great songs and inspired a lot of other great musicians, and now he is dead.

Malcolm Young. Angus's brother and co-founding member of AC/DC. These guys are the most fun to drive way too fast in a 1983 Honda Civic hatchback and yell-sing along to. If you haven't done that, I highly recommend it.

That's all that I can think of now, but, if you know of anyone else who died harder than American exceptionalism in 2017, remind us!

Also, you should definitely donate to wonkette in one of these people's names.