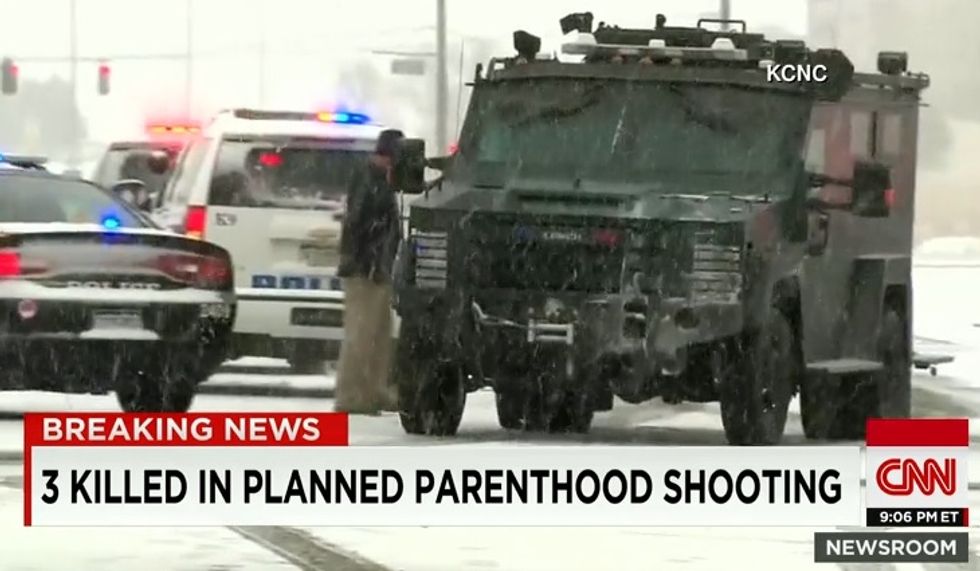 This had nothing to do with inflammatory videos. Just like Benghazi.

In another great day for the "pro-life" movement, a gunman shot up a Planned Parenthood clinic in Colorado Springs, Colorado, Friday, killing three and wounding 9. Among the dead were a University of Colorado police officer, Garrett Swasey, who was among the first to arrive at the scene; the university is only about 10 minutes from the clinic. The gunman also killed two civilians who have not yet been identified. Police persuaded the suspect, identified by a "federal law enforcement source" as Robert Lewis Dear, 57, to give himself up after an afternoon standoff that lasted over 5 hours and made Twitter even more of a sewer than usual of unreadable speculation, blame, and wholly imaginary political points-scoring. The shootings are expected to change absolutely nothing in the national debates over legal abortion or firearms ownership, but are at least a distraction from the usual stories about people getting trampled at Black Friday sales. Although that happened, too.

[contextly_sidebar id="bwJo8zmX1as8EVWEBqWJsqnTdwvjeOXg"]Police drove an armored vehicle through the entrance of the clinic, "smashing through two sets of doors into the lobby and rescuing some of those inside." The Denver Post reports that the armored Bearcat vehicle made multiple trips ferrying people rescued from inside the clinic to ambulances and police cars. See, police departments? That's what you have armored vehicles for, not to intimidate unarmed black people. Might want to make a note.

Planned Parenthood of the Rocky Mountains VP of public affairs Cathy Alderman said the group believed no staff were harmed, but was unsure about patients visiting the clinic. Yes, radical anti-abortion activists, this is your cue to post a witty comment about how any woman going to Planned Parenthood is already harming her precious unborn baby.

Colorado Springs Police spokesperson Lt. Catherine Buckley said Friday evening that "To even speculate on a motive would not be reasonable," although some supporters of the gunman, as collected on Twitter, had some ideas:

It is unclear how the murder of a university officer and two other people who didn't work at the clinic would have prevented any "unborn babies" from being aborted, unless of course women start deciding that ever going near a Planned Parenthood office is so likely to get them shot that it's not worth seeking medical care. God truly does work in mysterious ways.

Vicki Saporta, CEO and president of the National Abortion Federation (NAF), issued a press release offering condolences to the victims and thanking first responders who risked their lives to evacuate people from the Planned Parenthood building, and noted that

Since a series of highly-edited, misleading anti-abortion videos was released in July, we have seen an unprecedented increase in hate speech and threats against abortion providers. We have been quite worried that this increase in threats would lead to a violent attack like we saw today.

[contextly_sidebar id="0aHJNumI8OwaEHT9EMZNvNe1jv1D2PmB"]Saporta identified the clinic that was attacked as "part of the Planned Parenthood Rocky Mountains affiliate, which was featured in one of the highly-edited smear videos released this summer." One of the deceptively edited videos, which falsely claimed that Planned Parenthood routinely sells aborted fetus parts for research, was filmed at a Denver clinic, but not the one that was attacked.

[contextly_sidebar id="B4XpUogQ6SIsYiofWrnMCoKM4FTBAPJd"]The NAF also noted that "since 1977, there have been 8 murders, 17 attempted murders, 42 bombings, 186 arsons, and thousands of incidents of criminal activities [at clinics]." As Yr Wonkette noted in October, there have been four arson attempts at Planned Parenthood clinics since the videos were released.

Over at Dead Breitbart's Home for Endless Rage, John Nolte had some thoughts about the real victims of the murders:

Throughout next week, the incident will be used to bash traditional Christians, pro-lifers, and Second Amendment civil rights advocates like the NRA. If past is prologue, our Elite Media Ghouls will receive no small amount of help with their propaganda campaign from Democrats and the White House.

Let me assure you that this weekend is being used by the DC Media and Democrats and the White House to coordinate attacks that will have one goal in mind: to marginalize and silence pro-life voices.

Good to know he has a sense of perspective.

This is the second mass shooting in a month in Colorado Springs; in the US, there have been 11,996 gun deaths so far this year -- for a total of 92 Paris massacres. We assume it's time to ban Islam in America, for safety.

As of late Friday night, none of the Republican presidential candidates had commented publicly on the murders; we'll assume that at least one of them will insist the killing had nothing to do with abortion and that the shooter merely attacked the occupants of the Planned Parenthood office because it was a "gun free zone."

Update: The White House has released a statement (click to embiggen):

"This is not normal. We can't let it become normal." You'd almost think the president hadn't noticed what country he leads.