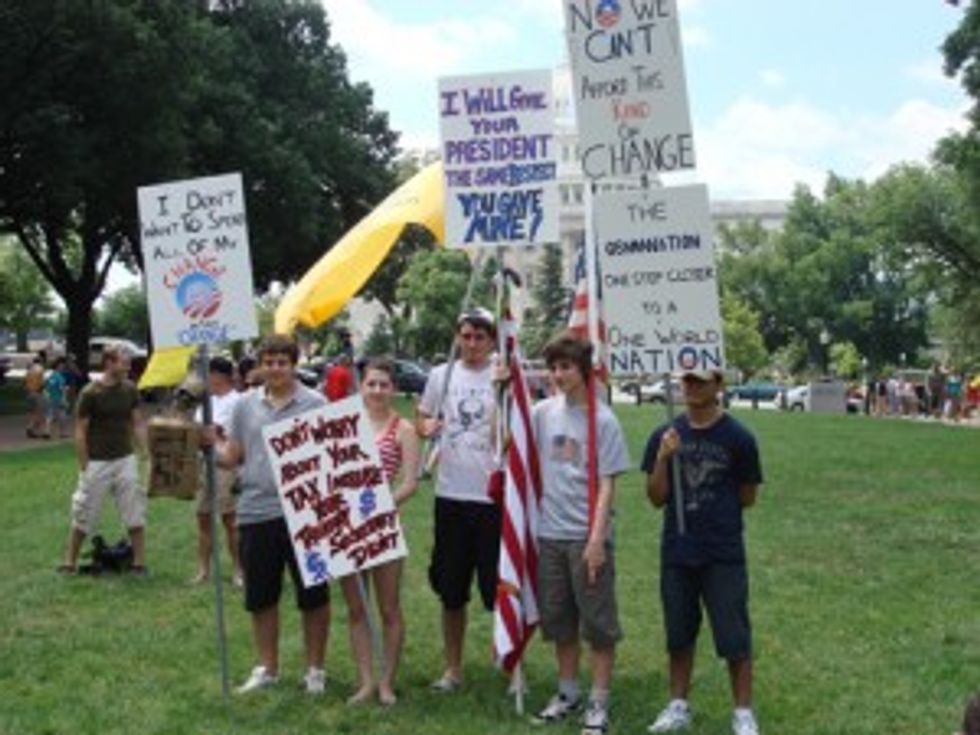 We sent Intern Riley straight into the ample belly of the Teabagging Beast, so we will allow this ONE (1) departure into first-person singular on your "royal we" Wonkette:

"So what's your deal?" the Paultard asked me with an air of suspicion, his Ron Paul REVOLUTION flag waving proudly as we walked. I had been following the Paultard for quite some time, in hopes that he would lead me to the secret location of the DC 4th of July Tea Party Extravaganza.

Trouble. I realized I had all the markings of a brazen, textbook-case Bolshevik: no cardboard signs duct-taped to my belly, no Ron Paul memorabilia stapled to my forehead, no powdered wig or colonial tricorn perched upon my noodle. Worse still, I was wearing a gray jacket -- Barack Obama's most favorite color. My goose was teabagged ... unless!

"Well," I chimed, "I was a Hill intern for Senator Ensign." The Paultard's pupils glazed over with an astute skepticism -- he owned Loose Change, 2nd Edition on Blu-ray and was not so easily deceived. But I pressed on, undeterred. "Now I have a job working for Sarah Palin's presidential campaign."

"Wait, what?" the Paultard shot back. "Palin is running for president?"

"You mean you haven't heard? She announced her candidacy on Twitter like ten minutes ago." It was an ambitious lie, but the bluff was simply unsustainable. I was moments away from being exposed as a disciple of the New World Order.

Then, a miracle! Across the street I could see a gang of obese white people on motorized scooters, pumping their homemade signs in the air and speaking in tongues. And in the distance I could hear the unmistakable plop plop plop of tea bags slapping in the wind, like dandelions blowing ever so gracefully in a Potomac breeze. It was a feast for the five senses. The Upper Senate Park. El Dorado. The Paultard and I had arrived.

Scandalous indeed, but who really has time to read boring legislation when they're in the middle of another captivating page-turner by Ayn Rand?

Your Intern got to touch a lady! Best. Independence. Day. Ever.

Yes, the Tea Party satisfied many carnal pleasures, but it also stimulated the intellect! Pamphlets and low-budget photocopies were passed around like herpes. My favorite party favor was a special edition of the Undercurrent, a campus newspaper "based on Ayn Rand's philosophy," Dullness.

Even Newt Gingrich's army of adopted orphans made an appearance. You are a sparkle of inspiration for fathers all over America, Newt!

There's a lot of idle talk about how the Teabaggers have lost momentum. Lies, probably circulated by the CIA and the Federal Reserve. The Movement is thriving. You can even text-message TEA PARTY to 54608, and you will be notified about the next mobilization. If we work together, we can get back on the gold standard. We must.