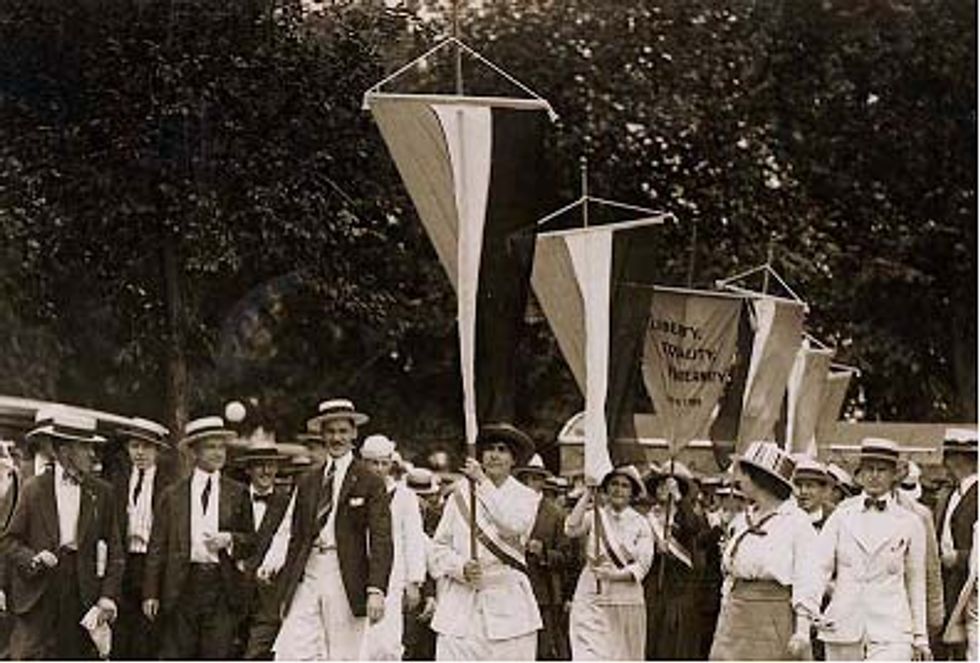 How the fuck did your Wonkette miss the fact that yesterday was the 90th anniversary of the day bitches got the right to fondle hanging chads? Sadly, half of your daily Wonkette Ladyteam is a Known Bad Feminist, and the other half is an ethereal artist who dwells in a secret elven workshop in Chicago, a city in which women have been forbidden from leaving the home since Mrs. O'Leary funded an act of fiery bovine terrorism.

So in 1848 some chicks got together at Seneca Falls, NY and made this thing called the Declaration of Sentiments, which is such a fucking girl thing to call a document. And then everyone did womynist activismy things for a long, long time. Also there was a big war that tore the country apart and slaughtered jabillions of men. And then came Reconstruction, when the New York Yankees made bags out of carpets and went down South so Derek Jeter could bone Scarlett O'Hara. After that, the Titanic sank and then someone assassinated a hipster indie rock band in Sarajevo, which started a war, and Germany got really uppity but we put the kibosh on THEIR attitude FOREVER, ensuring that Germany would never again try to start any shit with anybody.

We can thank Tennessee for holding out so goddamn long that it took until 1920 for American vagina-havers to be able to vote corrupt assholes into office. One of the state legislators in the Tennessee House broke a deadlock on the third round of voting by changing his mind after his smothering mother sent him a letter telling him to just let ladies have a say, already, JEEZ. So Tennessee ratified the 19th Amendment, and thus was it law (for white women!) Then that dude probs went home and leaned over so his mom could spank him for being a very, very bad boy. Then she sat him in her lap and took out a tit, and he had his dinner. And that's why we have to fill out stupid voter registration forms and have periods. God.