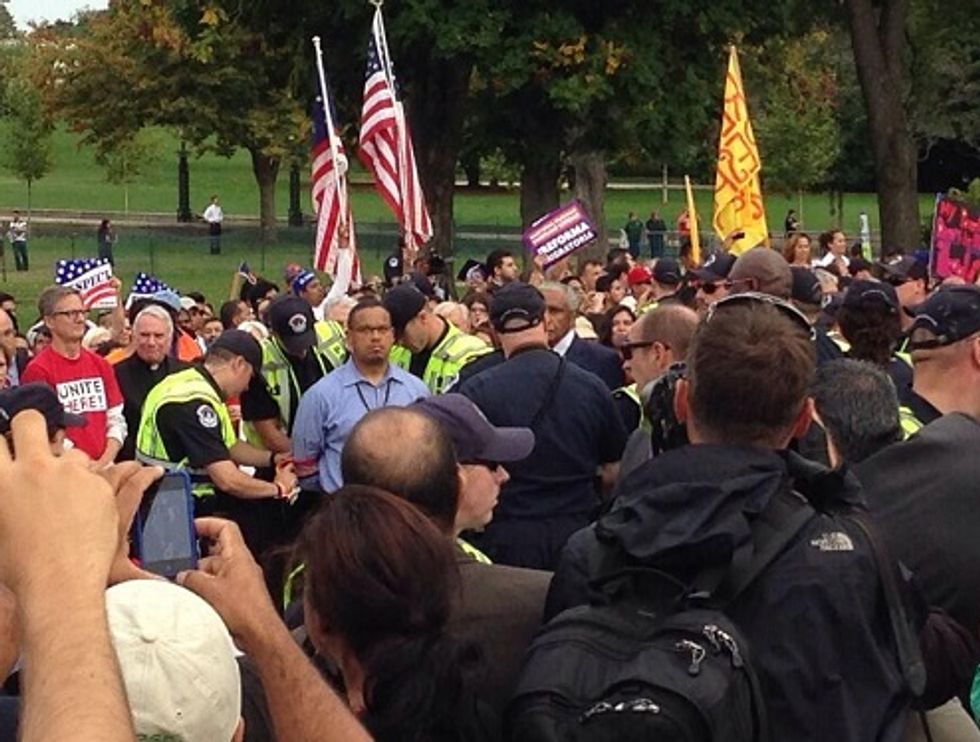 Several thousand people marched on the National Mall yesterday tocall for comprehensive immigration reform, and over 150 people were arrested when they blocked the street, including eight Democratic members of Congress, among them the awesome handsome Keith Ellison, pictured above. Conservatives on Twitter pondered the implications for national policy: Why was this protest allowed to happen when the government is shut down and Park Service Nazis are turning people away from national monuments?

The New York Times has the skinny:

The lawmakers, all Democrats, were detained by the Capitol Police after they stood silently in a line in the middle of a street that borders the Capitol lawn, blocking traffic. As the police handcuffed them behind their backs and led them away, a crowd pressed in, chanting, “Let them go!”

The representatives arrested were Joseph Crowley and Charles B. Rangel of New York, Keith Ellison of Minnesota, Al Green of Texas, Luis V. Gutierrez and Jan Schakowsky of Illinois, Raul M. Grijalva of Arizona and John Lewis of Georgia. More than 150 other protesters, many from labor unions and immigrant organizations, were also arrested after they sat down and linked arms in the same street.

The demonstration drew the attention of conservatives, who responded to the call for a path to citizenship for people who want to become Americans by questioning why the hell Barack Obama hates WWII veterans but lets wetbacks and their friends tear up the Mall:

Conservatives said the Obama administration was showing a double standard by allowing the rally a week after World War II veterans were blocked from entering their memorial on the Mall. The veterans went in despite barricades placed there. After that, the National Park Service said veterans would be allowed to enter the memorial during the shutdown.

In a statement, the Park Service said it had allowed the immigration rally as an expression of “First Amendment rights,” the same rationale it had provided for opening the war memorial.

“The Mall is supposed to be shut,” said Brad Botwin, the director of Help Save Maryland, an anti-illegal-immigrant group, who joined a handful of people at the Mall to protest the immigration demonstration. “Why is the Park Service helping illegal immigrant groups and desperate labor unions to have a rally today?”

Special Wonkette congratulations to civil rights hero Rep. John Lewis, whose arrest yesterday was his 45th, and his fifth as a member of Congress. Gotta like a guy who's been arrested in civil rights protests more often than most Americans have voted in their lifetimes. (Incidentally, Lewis has co-authored a graphic-novel memoir about his civil rights career. It's pretty good.)

Next, we'd really like to see about 100 House Democrats go down on the floor and start chanting "let us vote" until they're arrested -- Occupy the House, and shut down the shutdown.