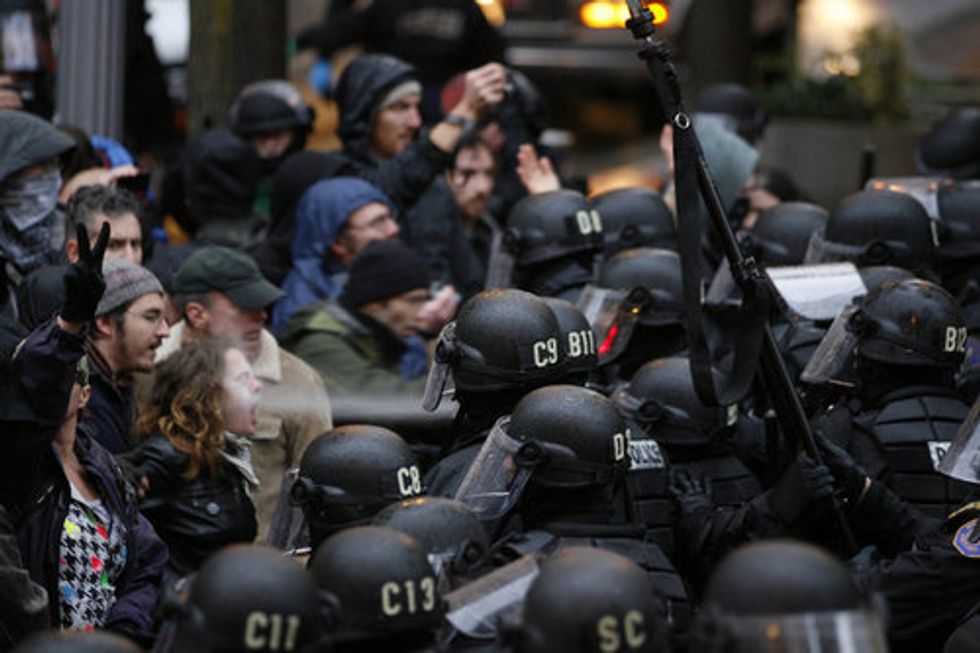 How did America's heavily militarized security guards for the 1% spend the work week? Oh, just pepper-spraying sitting students in the face, macing old ladies, stomping peaceful protesters, yanking women around by their ponytails, destroying libraries and bloodying the faces of America's citizens. You know, what they've dreamed of doing for decades.

Remember the fat, smug face under that helmet and behind that ridiculous mustache in the picture above. This happened yesterday at UC Davis, a California college in a delightful, sustainable little town between San Francisco and Sacramento -- the kind of place earnest liberals move to, when they have kids, so they can all ride around on the town's famous network of bike paths. It's a well-off town, mostly, and it takes quite a lot of tax money to keep a bunch of vicious thugs overfed and dressed like junior Darth Vaders with their portable hard-ons, on the off-chance some college kids might one day peacefully sit outside to protest this nation's revolting descent.

Here's the video, via Boing Boing:

One scene, one town. How many of these scenes have slipped by during these very busy weeks of protests and cop attacks? Up the I-5 in Portland, the stereotypical Brooklyn of the Pacific Northwest is apparently home to an absolutely insane paramilitary gang of thugs who cannot contain their glee at finally being able to go batshit on the people of Portland, with truncheons.

And more, from everywhere, because the kleptocrats told their rent-a-cops to smash heads, put all this to rest, or else. Or else what? In Egypt earlier this year, the cops refused to attack the people. East Germany and then the whole Iron Curtain collapsed when the local cops wouldn't smash heads when Erich Honecker ordered it. What about America? Where are the cops who walked off the job rather than attack their neighbors drowning in debt and despair?

What happens next? If you are the kind who believes in signing petitions to the president, here's a petition imploring Barack Obama to stop the American police violence against the nation's people. Pictures from brave people everywhere; click to go to the posts where we found them.