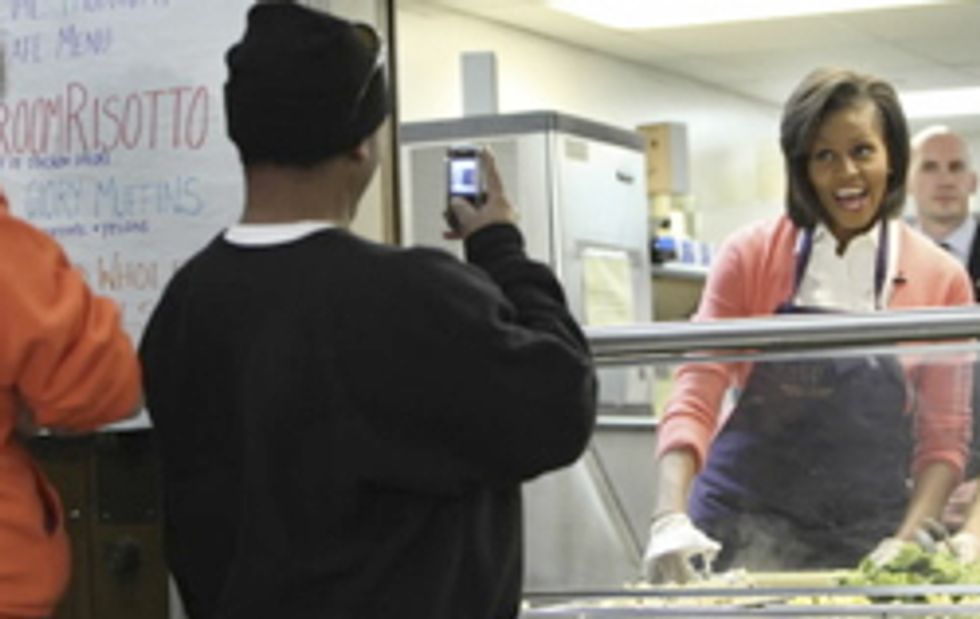 Aww, Michelle Obama went to help out at a soup kitchen for homeless people on Thursday! And while she was there,the AP took a photo of this guy taking a cellphone photo of Michelle's very famous arms. So now America's conservative pundits are very upset that this supposedly homeless man has a telephone, so poverty isn't actually a problem, and we're even "blessed" to have such rich homeless people in the United States.

Voice-of-her-generation Kathryn Jean Lopez chimes in with unusual modesty at first, before reverting back to the standard "the Poors are actually rich and God hates them in his own passive-aggressive way" rigmarole:

I don't envy this man's situation, whatever it is, and don't mean to make light of it. But we are a blessed people when our poor have cell phones.

Here's Kathy Shaidle, whom we'd never heard of before reading this Salon post. Starting today, we are all Kathy Shaidle readers:

Today's "poor" are the rich Jesus warned you about: fat, slovenly, wasteful of their money and other people's...

He spends all his (our) money on cellphones and, most likely, tattoos and drugs and booze and other crap, and has no money left for a home and food. And why should he bother? We pay for his shelter and food anyhow...

What's really funny in that news story by the way is what they're serving at the soup kitchen: risotto with brocolli. Obviously some rich white liberal did the cooking that day, feeling all proud of herself, and what thanks did she get? Some lowclass loser going, "You expect me to eat this weird crap?!"

As Salon's Alex Koppelman notes, the "weird crap" is simply "rice cooked in chicken stock with some vegetables." Jesus, this Shaidle person is a night terror. WHO IS SHE?

A Children's Treasury requires at least three (3) examples, and Malkin wrote something, but we are still too scared of Kathy Shaidle and will have to end this post now, so we can go cry in dark corners of our basements.

Michelle Obama serves food to D.C. poor and homeless, but... [LAT/Top of the Ticket]