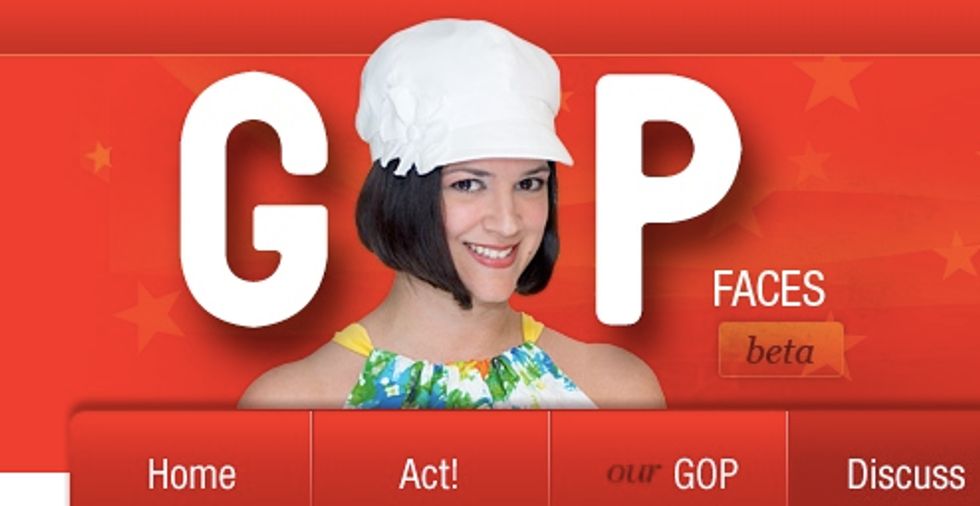 The best aspect of the newly redesigned Republican Party website -- aside from that amazing "What up?" thing -- is the ability to refresh and refresh and refresh the homepage, for hours, to see all of the "GOP Faces" in circulation in the upper left corner, between the "G" and the "P," where, what, a "Y" is supposed to go? But it's just some random person's head instead? Well your editors Jim and Juli have seen most or all of the "GOP Faces," and analyzed them. Click the clicky to meet the members of what must be some secret "other" Republican Party in an alternate dimension, what with the youth and the diversity and the albino.

Juli: Oh this one's named beta too! They couldn't name him "Senor Beta"?

Juli: "Do I look somehow upside down to you?"

Juli: Dana Carvey had a stroke?

Jim: "You know what would be cool? If the G and P were actually little boys, and I could molest them, because I like to molest little boys. Because I squint like this, right?"

Jim: "I'm modeling part-time for the Internet now, but I'll be going back to Bryn Mawr in January."

Juli: "I stole Dana Carvey's collared shirt while he was having a stroke."

Juli: You'd think the description "token stereotype" would somehow be self-defeating, and yet...

Jim: Why wear a scarf when you can tie Goblin Snakes around your neck?

Juli: "Oh hi everyone I am combing my hair like this for fancy photograph hour!"

Juli: This one's a secret wink to all the Atlas Shrugged readers...

Jim: "When they told me the G and P would be white, I knew I had the perfect outfit."

Juli: [*sounds of a static-y car radio sort of picking up the local top-40 station but not really*]

It's the new faces of the GOP! the GOP's website, "America.com!"

(What? Don't even think it. They get their paychecks, we get to mock them, it's fair.)