A Children's Treasury of Presidents Posing With Michael Jackson 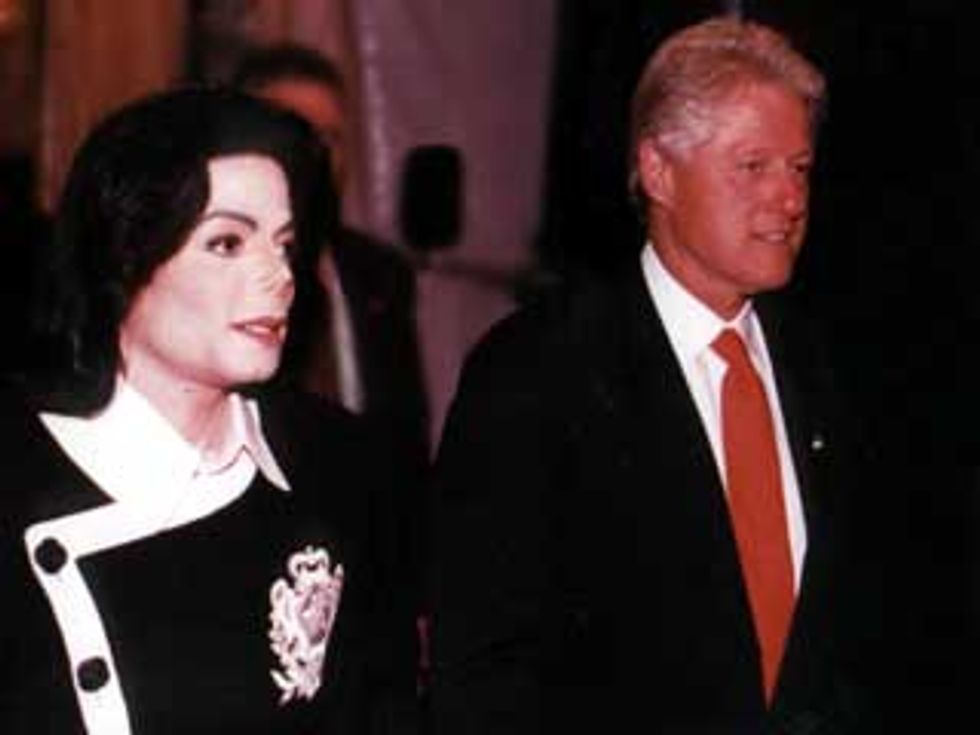 One-man circus Michael Jackson has officially died, and somebody is very, very happy about this news. (That "somebody" is Mark Sanford. Adios, Mark! Enjoy the rest of your life.) We, of course, could give a hoot about Michael Jackson, although your editor once free-lanced a "concert review" of Wacko Jacko's post-pedophile (?) 1996 performance in Prague, and the National Enquirer paid something like $500, enough for a plane ticket back to America. So, thanks, Michael! Thanks for the good times, and thanks to Vladan for getting us the Ecstasy so we could tolerate that awful spectacle. Also, Michael, you sure did get yourself photographed with a lot of 1980s and '90s presidents! You were truly the Barack Obama of that particular era.

Dana Carvey impersonator George H.W. Bush No. 41 Senior sure doesn't look too comfortable with Jacko in the picture above. But Poppy was never about Hollywood. He found it all vulgar and awful, unlike his predecessor:

Nobody loved taking White House pictures with Jacko more than the Reagans. You might think, what does this insane delusional Hollywood performer have in common with Michael Jackson. Plenty! Reagan played a chimp called "Bonzo," and Jacko used to fuck a chimp called "Bubbles." Not so different after all ....

Reagan even sent kindly letters to Jacko, like this actual historical example of the president just kissing so much celebrity ass. Hey, this creepy pervert disco kid is very famous, let's befriend him! Who cares if he's black or whatever, he's working on that problem, too!

"What does he mean, the chair is not his son?"

And that wraps up tonight's Children's Treasury of Presidents Posing With Michael Jackson (RIP). Oh, we'll throw in this frightening alien Jacko and red-bulb Bill Clinton, for the completists out there. What else? What else to say, about this fame-crazed oddball and his somewhat-expected death? How about this, from the Zen teacher Thich Nhat Hanh:

The same thing happens when we lose any of our beloved ones.