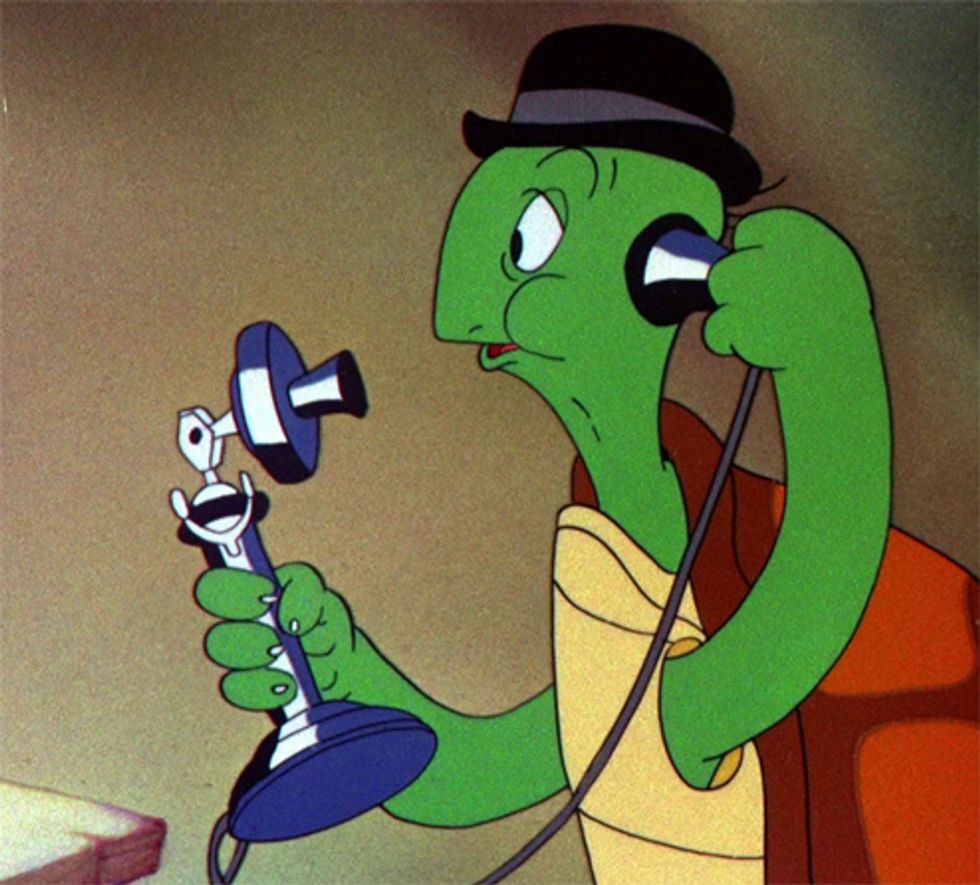 In the closest thing to a "Super Tuesday" in this off-year election, a whole bunch of Tea Party candidates did worse than expected against "mainstream" Republicans who had better funding and who all sound like teabaggers now anyway. The biggest win of the night was less of a surprise now than it might have been a couple months back: Senate Minority Leader Mitch "Lord Terrapin" McConnell easily won his Kentucky Senate primary against Louisville businessman andchicken-boxing enthusiast Matt "B'kaww!" Bevin. Looks like institutional money and power are everything they're cracked up to be. McConnell will face Democrat Alison Lundergan Grimes in November, and in his victory speech charmingly suggested that she is not a real Kentucky candidate, but a big Fakey McFakerton who will cram Obamacare down your throat, warning, "The people who handpicked my opponent are not on your side.” And so the Charm Offensive begins.

Matt Bevin did not immediately endorse McConnell, although he did promise that he would certainly not support Grimes:

“I have no intention whatsoever in this race or of any other race of supporting the Democrat platform,” Bevin told a crowd of supporters in Louisville. “There is zero chance that the solution for what ails us is going to come from the Democrat Party.”

Also, too, for what it's worth, SmartPolitics notes that McConnell didn't exactly win a resounding victory:

McConnell's 60.2 percent to 35.4 percent win over his Tea Party-backed opponent was hardly an impressive victory for an incumbent when situated in the context of Kentucky electoral history.

Smart Politics reviewed primary election data over the last century and found that the 60 percent won by Mitch McConnell Tuesday is the lowest support registered by a sitting Kentucky U.S. Senator from either party since 1938.

Still, we bet that running against "Hollywood" is bound to be a winning strategy.

On to other races! In Pennsylvania, the Democratic primary for governor went to self-financed candidate Tom Wolf, who turns out not to be the novelist, so that's a relief. He will face incumbent Gov. Tom Corbett, who Politico punditizes is "one of the most vulnerable Republicans in the country." Also in Pennsylvania, former Rep. Marjorie Margolies lost her bid to return to the House to state Rep. Brendan Boyle. Since Margolies is Chelsea Clinton's mother-in-law, expect a bunch of chicken-entrail-examining on cable news about What This Means for Hillary in 2016. Matt Bevin can bring the chicken.

In Georgia, the best news is that two of the three of the dorks who left the House to run for Senate lost, so their House seats can now be filled by new dorks. Congresscritters Phil Gingrey and Paul Broun both finished with 10% of the vote or less; both represent a potentially serious loss to future Wonkette articles. The top two finishers in the seven-way primary, businessman David Perdue and U.S. Rep Jack Kingston, will compete in a runoff set for July 22; the winner will face Democrat Michelle Nunn. And let's pour one out for poor Karen Handel, the "tea party favorite," who finished third even though she did such a great job of almost wrecking the Susan G. Komen Foundation with her attempt to cut the group's association with Planned Parenthood. We bet she's already warming up for a permanent place on the rightwing speaking circuit; expect to see the descriptor "Fox News contributor" before her name any moment now.

In Arkansas, absolutely nothing you want to read about; incumbent Democratic Sen. Mark Pryor and Republican Tom Cotton were both unopposed and yet somehow managed to win their primaries.

In Oregon, Dr. Monica Wehby won the Republican nomination for Senate; she'll get to run against incumbent Sen. Jeff Merkley. Wehby is in a weird place -- not just the whole state of Oregon -- because of recent allegations of stalking an ex boyfriend and harassing her former husband, which apparently didn't do enough damage to hurt her primary campaign, but could become a serious problem in the general election. Also, too, that former boyfriend contributed heavily to a PAC that ran ads against Wehby's main primary opponent, James Conger, but insisted that no way did he and Wehby ever "coordinate" beteween her campaign and his PAC, because such a thing is just unthinkable.

And finally, in Idaho, boring rightwing Congresscritter Mike Simpson managed to fend off a tea party challenge from even more rightwing Idaho Falls attorney Bryan Smith, who despite an endorsement from the Hair Club For Growth didn't manage to get much traction claiming that Mike Simpson was a scary liberal who would take away your guns, because if there's one thing Idahoans know about Mike Simpson, it's that he's a reliable NRA shill. And in the GOP gubernatorial primary, neither of the Crazy Guys had a chance, but their appearance in the epically weird debate may have helped incumbent C.L. "Butch" Otter win against real-estate guy Russ Fulcher, whose name would have been fun, too. Senator Jim "You're kidding, no such person" Risch also won his primary against someone who managed to be even more obscure.