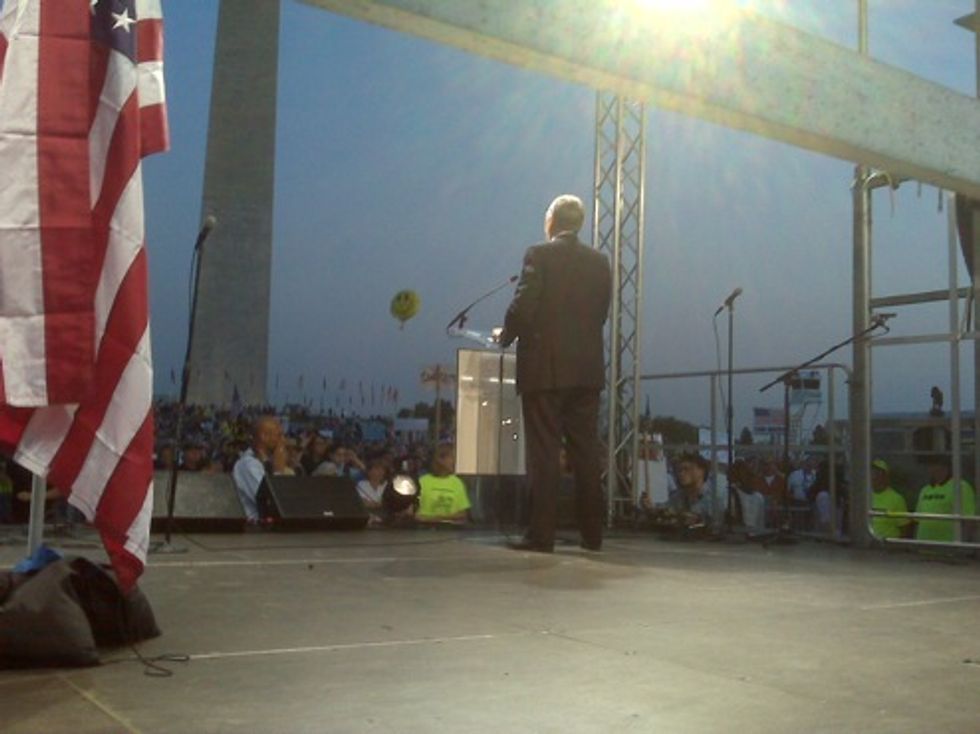 Welcome to Narnia! We arrived at the FreedomWorks Tax Day Tea Party last night just as the Christian lion Admiral Ackbar was gettin' the crowd all hot and bothered, about socialism, between their trips to the Fried Dough and Porta Potty lines. No just kidding, the speaker was maybe Neal Boortz or somebody else. "They're trying to smear you all as racists!" he said, to a pretty indifferent reaction.

This guy, an evil liberal (he probably knows -- or is at least gay-married to -- Obama) was parked on the corner of 15th and Constitution, arguing with a couple dozen teabaggers at a time for much of the evening. His sign was poorly drawn and said that the teabaggers were all basically Klansmen. This led to a shouting match over abortion. Why do you love abortion so much, liberal? Why did you support a health care bill that legalized it for the first time?

See, here he is, the liberal abortion monster. That's his mother with the flowery backpack to his left. How do we know of their relationship?

Because this Hero in the white shirt carrying the white bag, after joining his fellow pro-lifers to yell about how much they hate abortion, said to the liberal, "Your mom should've aborted you." And then his mom said, "Hey, I am his mother," and he kind of sputtered "Uhhh... you are both murderers?" See? Everyone was having a good time at the FreedomWorks Tax Day Tea Party.

We'll give them this: conservatives are so much more lenient with press access at these events (unless Palin's there). The organizers and volunteers? Very friendly people, very accommodating. Wonderful people. Liz Glover just walked into press area and said something like, "Hey can we have two press passes, we're with the blogs," and bada-bing. Thank you, Dick Armey minions!

Got some coal miners up there -- bought on the Internet? -- to yell about cap-and-tax and how it's socialism. They were Real Americans. Now the plan would be to retrain coal miners to work in alternative energies if those ever came around (they're not), which would save them from maybe not dying all the time while digging coal out of the center of the earth and then having the earth fall on them. But "plans" have a well-known homosexual bias, so you can't blame them for being angry at the Kenyan from Kenya trying to force cap-and-tax down their terribly deregulated throats.

One of the very patriotic Real American speakers working the crowds with "USA! USA!" chants was... "Lord Monckton," an actual Lord of the Aristocracy from England who speaks in an Aristocratic English Lord's accent. Got it?

There was a rapper, too! He rapped about taxes and saving the country and Freedom. When your editor asked wingnut expert Dave Weigel, who was of course at this thing and furiously scribbling his little notepad notes like a nerd, whether we were actually witnessing a conservative rapper doing a conservative rap song before a crowd of predominantly elderly white people, he said, "Yeah, but this isn't his best song." Man, Weigel needs to get a new beat.

USA USA! That's all they say, the teabaggers. They say "USA USA!" just like that for hours. It's pretty annoying. Not just the repetition, but the need to be so selfishly territorial with the name of a 300+ million person country. These few thousands, desperately wanting to enclose themselves within the few hundred acres of lawn at the Washington Monument, mark it off with chain-link fences, declare it a sovereign nation, and call that nation the "United States of America" -- just so they'll be able to whine another few days about how the name's been taken.