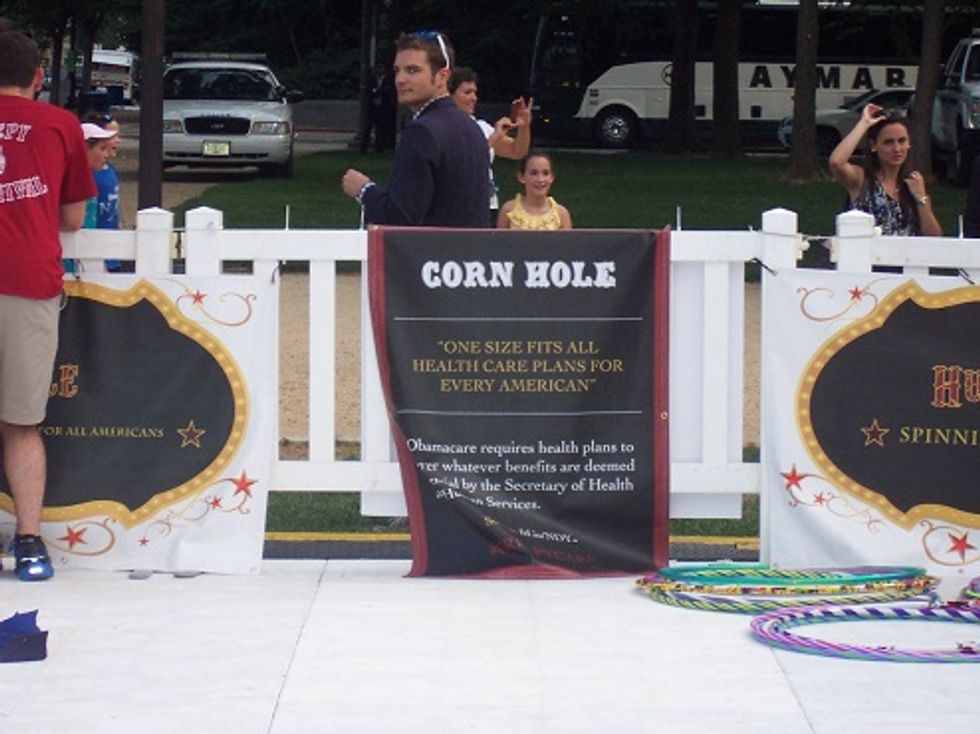 Last time we checked in with the Koch brothers' frathouse spinoff Generation Opportunity, they were attempting to convince DC's underemployed youth to shun Obamacare by drowning them in rail drinks and cheap sunglasses. Now that it's summertime, like everyone else they want to be outside having fun instead of in some dank basement bar, so what better waste of their seemingly bottomless budget than holding a parody of a carnival on the National Mall?

On arriving at their fenced-in dirtpatch, we found a juggling unicyclist and a gothy stilt-walking girl in a fringed corset circulating outside the entrance.
An army of staff in red t-shirts formed a gauntlet to scan our tickets, search our bags, tag us with neon green concert bracelets, and herd us into the centerpiece of the event, a darkened walled tent that held their Creepy Hospital.
In the first chamber, a shrill bureaucrat told a guy in the waiting room that his application for insurance had "timed out." As he fell to his knees and begged for his life, his tormentor ordered us into the infirmary next door.
As she wandered among cots with plastic limbs sticking out from white sheets, a lady we guess was supposed to be an evil nurse told us we'd have to wait for "Doctor Reaper," who eventually appeared and insisted we all just call her Grim!
Another deranged-looking doctor barged in, tossing body parts onto the fake-roach and -rat covered floor, handing out sheets of paper he said held his patients' private information, and offering to treat us all for jock itch.
Just as we were wondering if Uncle Speculum was a no-show, we found him in the next room presiding over a Death Panel that yelled DENIED! a bunch of times.
Then they asked us to leave so they could "relax" in private, which we assumed was code for Insurance Adjuster Orgy.
And then came the Heavy Education in a room covered in banners denouncing medical experiments inflicted on innocent people by the Terrible Government many decades ago. The Tuskegee experiments gave people syphilis! Veterans were lobotomized! Little children were injected with radioactive material! Those things would not happen if we were protected from readily available health care, obviously.
As their timeline notes, when the government finally acknowledged and apologized for these horrors, it was the Obama and Clinton administrations that said they were sorry.
Outside, we found Millennial Mike, a bearded huckster using sleight-of-hand to show how Obamacare is tricking the youth into paying for the olds! He was busy showing off for Rep. Paul Gosar, a dentist from Arizona and actual elected official in your United States Government, while his helper stood nearby with his Shoe Box of Magic.
Later, Gosar tried to give a speech and got crotch-bombed by a performer in a kilt.
The sights! The sounds! The smells!
There was an aerialist hanging from a frame (to symbolize your health coverage getting suspended? who knows) and a kissing booth, which we stayed well clear of. No telling what kinds of diseases these people have! They're uninsured!
As we retreated toward the safety of the Air & Space Museum, we were left with more questions than answers. Like: what kind of person bases their decisions about health care on corny sketches in a tent and a table of free Nutter Butters? When you figure that out, you'll have found Generation Opportunity's target market.
You can follow Beth on Twitter for all your political carnival news.
Beth Ethier