This is the greatest destruction of individual liberty since Dred Scott. This is the end of America as we know it. No exaggeration.

It's really kind of sad that Breitbart editor Ben Shapiro put up this tweet mere minutes after the ultra-conservative Supreme Court approved socialist healthcare in America forever, because it's like he didn't even try to let other people post their own insanely hyperbolic screed before writing the Platonic ideal of one. You know how it's kind of annoying that sportscasters and such use "literally" to mean not "literally" but "I am using figurative language but very, very strongly"? Well, Ben Shapiro has established new heights that make misuse of "literally" literally look like prose that Strunk & White's ghosts would masturbate to. From now on, every paragraph about anything you don't like ends in "This is the end of America as we know it. No exaggeration." But other people were ludicrous too, so let's look at what they had to say.

Probably-not-2012-VP pick Marco Rubio was totally for Obamacare until he found out it was a TAX, you guys. Now he's against it!

Now that we know #Obamacare is indeed a #jobkilling #Tax we should move to #RepealObamacare as soon as possible. #letsvote #tcot #sayfie

Lovable crazy person Pamela Geller watched Obama's victory speech and caught the clue that America is in fact over now:

Obama yappin' again-why aren't there any American flags in the frame? Typical The flag to Obama is like the siver cross to Dracula #obamatax

The real question is, why weren't then tons of Russian flags in the frame? Because that's where we live now: Stalinist Russia.

"The Supreme Court ruled against the American people today," said Jenny Beth Martin, Co-Founder and National Coordinator of Tea Party Patriots. "The American people overwhelming[sic] oppose Obamacare. Now more than ever it is time for the American people to band together and take our government back. Americans agree with what Justice Kennedy said in the dissenting opinion that 'the entire Act before us is invalid in its entirety.' We are putting all politicians on notice that we will not rest until this law is overturned it’s in entirety."

Wouldn't it be kind of great, if the Supreme Court could just rule against the entire American people, on principle, because we're losers? Give us like three days to get out?

Sadly, Erick Erickson proclaimed that he is "not down on Roberts". But his commenters are! And on Romney! 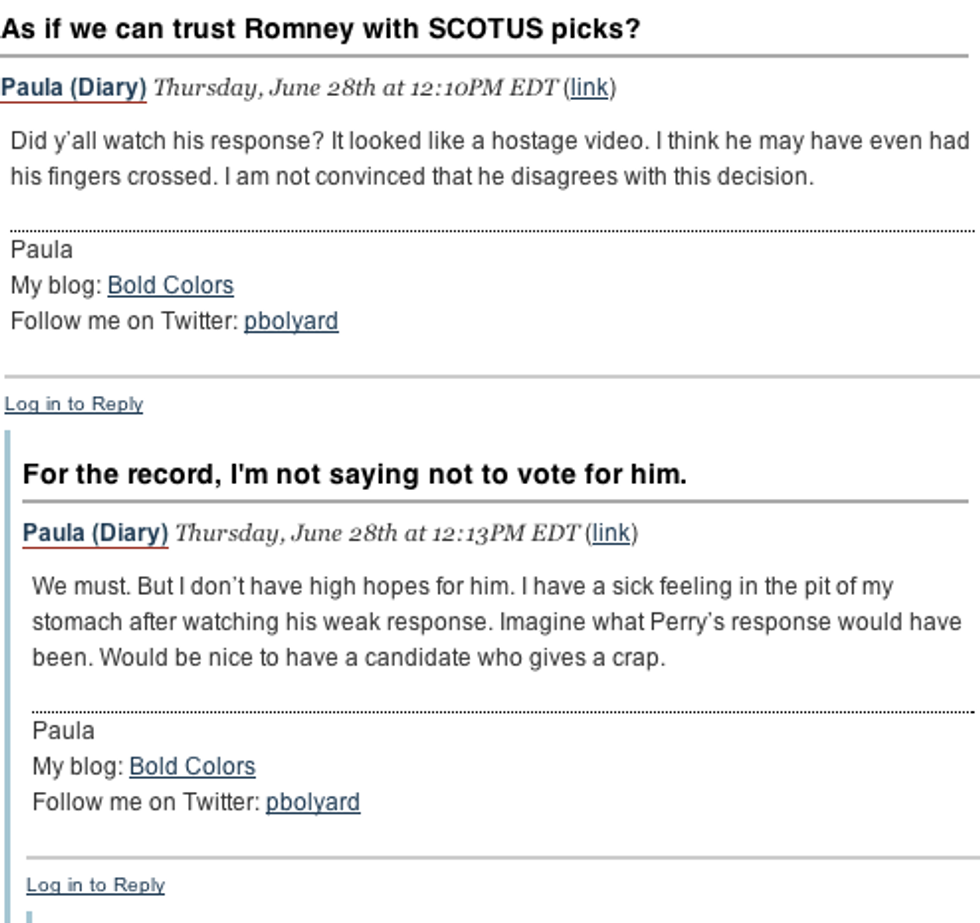 Yes, imagine what Perry's response would have been! It would have been hilarious, considering he'd have been out of his mind on painkillers. Painkillers that he didn't buy with any of your dag-gummed Obamacare.

Oh, also, lots of people on Twitter swore they would move to Canada, to escape socialized medicine, which we don't even know where to begin with that. Also, Mike Pence, who is a Congressman and the leading Indiana gubernatorial candidate and not at all a fringe figure, said that the Supreme Court decision was as bad as 9/11, but then he apologized, leaving Ben Shapiro the Wingnut Obamacare Freakout Winner, as of 3 pm today.

How Many Trump Crimes Will His Lawyers Confess To Today? (Impeachment Trial Liveblog, Day Whatever!)

Whaaaaat? Republicans Personally Benefitted From Tax Cuts They Voted For? How Could That Be?!