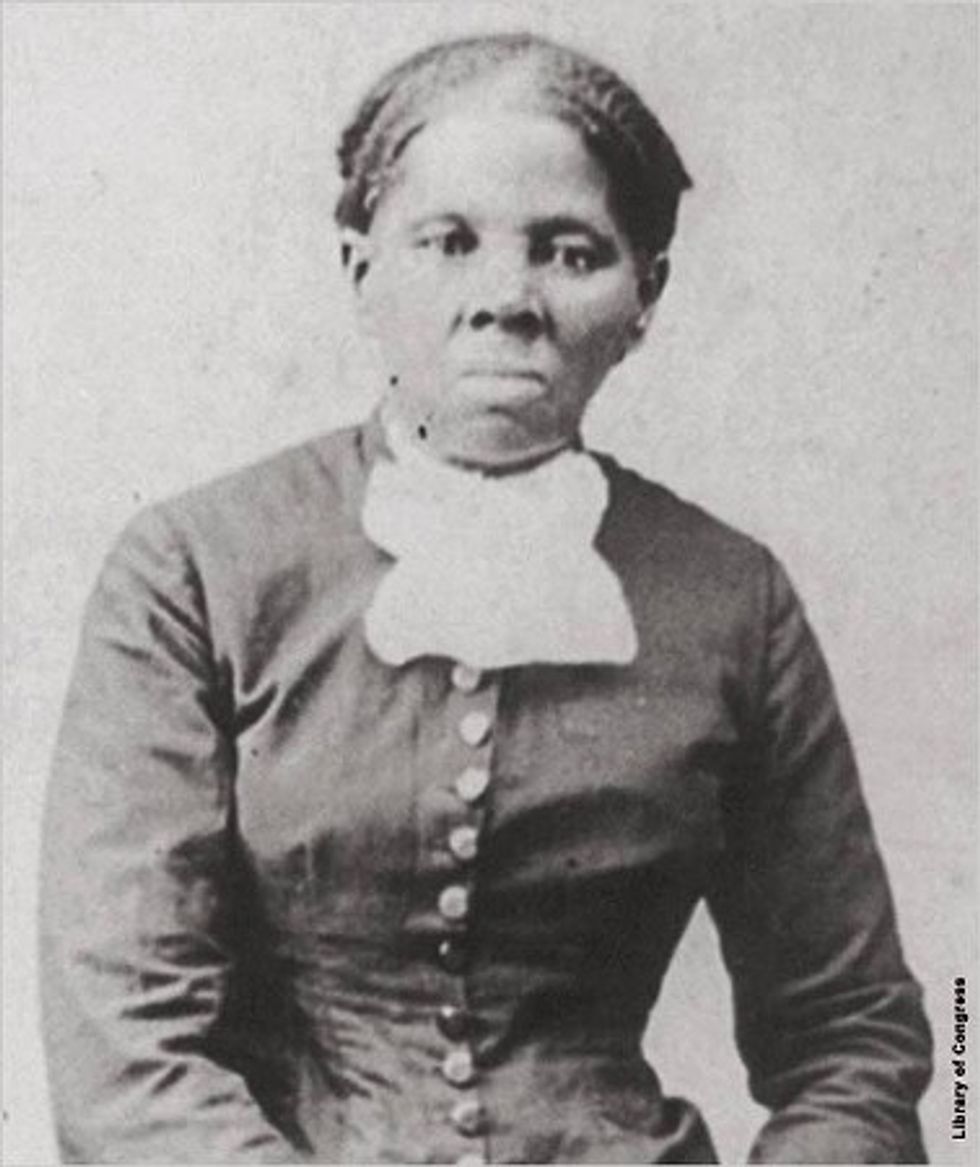 Wingnut America is rather torn on how to react to Wednesday's news that Harriet Tubman will be replacing Andrew Jackson on the front of the $20 bill. The most openly racist nutbags, like the nice volks at the Daily Stormer, are at least honest: Under a banner celebrating the Fuhrer's birthday (and you hippies thought 4/20 was just for pot!), they're not the least bit shy about their feelings:

Haw Haw! Needless to say, the Daily Stormer is out of the mainstream, and you'd never catch a respectable conservative blog tolerating racist discourse, no way! Consider this perfectly accurate headline from the Stupidest Man on the Internet, Jim Hoft:

[wonkbar]a href="http://wonkette.com/600911/harriet-tubman-to-grace-new-20-bill-because-suck-it-andrew-jackson"[/wonkbar]Clearly, even though the announcement was made by Treasury Secretary Jack Lew, it was really Obama who forced a great American Hero off the $20 and replaced him with a nobody. After blockquoting much of Politico's story on the new $20 bills (dude writes as little as possible himself), Hoft adds, "For the record… Much Harriet Tubman’s story is likely made up" [sic] -- the link goes to a grumpy debunking of several myths about Tubman and the Underground Railroad found in history textbooks.

This is how Hoft works: He doesn't need to say anything racist, because his readers will take care of that themselves. A whole lot of them wanted to talk about what an ugly old black lady Harriet Tubman was:

We're guessing that last one was a reference to Tubman helping slaves escape to Canada? Or maybe simply from the Confederacy into the Union? BUILD THE WALL!

There was also this scholarly dialogue between two readers:

How about Booker T. Washington? He wanted blacks to get educations and jobs.

You mean the "terrific ten" or whatever he called it?

To get 10% of highly functioning blacks to ascend into white society by showing how smart they are and the other 90% will follow?

Problem was, there isn't 10% of blacks that are highly functioning and the remaining 90% are unable to function in any sustained and meaningful way.

The bulk of black America hovers right around the cutoff between Dull and Average intelligence.

Never mind that it was the "talented tenth" and the term was used mostly by W.E.B. DuBois -- those people all look the same anyway.

Then there were the visual humorists!

For some reason, the staff thought it might be a good idea to post a little reminder about what's not allowed at the Gateway Pundit:

And we'll give them this much credit: They removed many of the comments listed above, including the images. So we guess it was really unfair of us to capture them before they were deleted, huh? Shame on us. We'll give Hoft this much credit: He knows better than to leave his readers' dirty white sheets hanging on the line.

We're also rather fond of this discussion of the new bill at Tucker Carlson's Internet Concern:

Yeah, Jackson "removed some Native Americans from their land." And Hitler caused some Jews to have respiratory difficulties.

Then there's the attempt to belittle Tubman through de-mythologizing her; that's the approach taken by James Fulford at racist clearinghouse VDare last year when the proposal to replace Jackson got rolling. Cribbing heavily from a 2004 review by James McPherson of several Tubman biographies, Fulford points out all sorts of supposedly terrible things about this supposed hero, like the fact that she was illiterate, and that her only four known letters were dictated. Egad! An illiterate former slave? How could anyone find her admirable?

Where McPherson and the biographers he reviews sought only to sort out the knowable facts of Tubman's life from the myths that have grown up around her, Fulford goes that extra step and tries to suggest Tubman never really amounted to much. Fulford concentrates only on her work as an abolitionist and rescuer of slaves, completely ignoring her service in the Union Army as a soldier, spy, and nurse during the Civil War. McPherson notes that she led black Union troops in a raid in 1863 that "destroyed Confederate resources and brought out 750 slaves;" Fulford not so much. McPherson also points out that, following a Union assault on Fort Wagner, Tubman provided care to the wounded of the 54th Massachusetts Infantry, the regiment celebrated in the movie Glory -- although she didn't make it into the movie, so maybe Fulford considered it unimportant.

Instead, Fulford concentrates on parts of the "Moses" myth that he can downplay, because why would anyone make a hero out of some illiterate slave lady who never accomplished that much anyway:

Well then. She merely rescued between 50 and 70 people from slavery, and quite a few of them were relatives. And later biographers exaggerated her exploits? That's simply appalling! Next you'll be telling us that George Washington was capable of telling a lie.

Fulford even manages to find something problematic in the fact that Tubman was able to help the anti-slavery cause despite having survived a brain injury:

Tubman suffered from some “temporal lobe epilepsy” or “narcolepsy” or possibly “cataplexy” as a result of a head injury. Symptoms, as described by McPherson: “[F]or the rest of her life Harriet would periodically lose consciousness and appear to fall asleep, sometimes for only a few seconds, sometimes for several minutes, and then awaken to carry on as if nothing had happened.” This really terrified the people she was supposed be rescuing—and raises questions about how much she could really have done.

Not mentioned by Fulford: McPherson points out how Tubman suffered that head injury:

When she was twelve or thirteen she was sent to work in the fields. A year or two later she sustained a life-threatening head wound when an enraged overseer threw a heavy iron object at an escaping male slave and hit Harriet instead.

Oh. Can't imagine why Fulford might have left that out. As Steve M. at No More Mister Nice Blog says, "I read this as a triumph over a serious brain injury, but your mileage may vary."

Fulford even manages to transmute Tubman's neurological injury into a suggestion that she was untrustworthy. McPherson says that as a result of her head injury, Tubman sometimes "experienced dreams or visions, even hallucinations, sometimes with powerful religious overtones—more than once she said that God had spoken to her." Fulford's take on that?

As a result, again, of the head injury related seizures, Tubman was apparently delusional.

In fact, should we believe anything she ever said about what she did? Besides, she also used the N-word, so she's a racist:

Speaking of terrifying the people Tubman was supposed be rescuing, she didn’t actually carry a musket as pictured above, but a revolver -- with which she’d threaten to shoot anyone who faltered.

Wikipedia refers to Tubman’s threats this way: “Tubman told the tale of one man who insisted he was going to go back to the plantation when morale got low among a group of fugitive slaves. She pointed the gun at his head and said, ‘You go on or die.’”[Accessed May 15, 2015] That’s the 2015 version—almost every time it was quoted before that, including in the Negro Digest in 1965, she said “Dead n*ggers tell no tales; you go on or die!”

Ultimately, Fulford concludes (coincidentally, next to a lovely ad for Confederate flags), that this decidedly unimpressive heroine is only admired because of anti-White bias:

One reason for the Tubman boom: the trend of promoting antiquarian hate against whites for hundred-year-old racism and for slavery abolished a hundred and fifty years ago.

But there’s also another, sad reason: there are so few black heroes and heroines, and they have to take what they can get.

But does the rest of America have to put up with it on the $20 dollar bill?

Happily, wingnuts who don't want to go the racist route can take another approach: Celebrate Harriet Tubman the Republican hero! Just look at how those dumb Democrats in the Obama administration, in their attempts to be politically correct, have in reality replaced a slave-owning Democrat with a Freedom-loving, gun-toting Republican, hurrah! That's the angle they ran with at PJ Media:

Because just like Martin Luther King, if she were alive today, Harriet Tubman would obviously be a Republican, and a member of the NRA, too (like Maya Angelou, maybe). Why doesn't the Liberal Media acknowledge these simple facts? Now, if you want to get all technical about it, even if, like most blacks of her era, Tubman probably would have aligned herself with the Republicans, she certainly wasn't a registered Republican, seeing as how there were no women voting prior to the 19th amendment. Must have been liberals who held women back.

Or maybe it's best to simply listen to the wisdom of Ben Carson, who suggested Tubman could go on the $2 bill. It's not like there's anyone important on there now.

Now we can hardly wait for the Deleted Commenters to show up and point out that the KKK was founded by Democrats, and of course nothing at all about the two parties ever changed after 1964. Also, Robert Byrd was in the Klan.