A Close Read Of Mitt Romney’s Favorite Terrible Toby Keith Song, Which Is Terrible And Is By Toby Keith 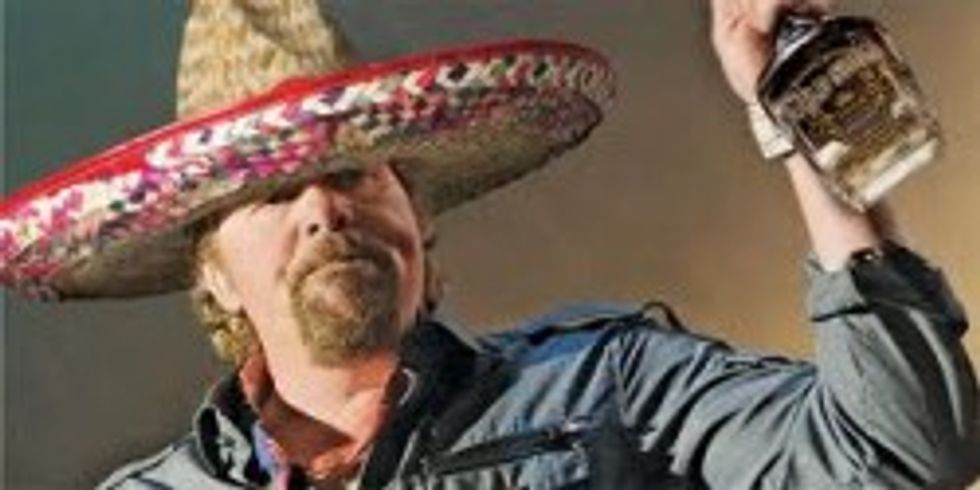 Every country music song today is about a) how America is the strongest, bestest country ever pulled from Baby Jesus' egg sac and b) how America is doomed for some reason, probably because of the socialist medical programs that keep alive the country's kabillion Wal-Mart employees -- the store wherea third of all country albums are purchased. Since that contradictory mix of jingoism/irrational terror is the Republican platform, it's no surprise that Nashville hits are played at Republican rallies, even those of likable everyman Mitt Romney, who in real life probably listens to the King Family Singers or the feathery rustle of Scrooge McDuck swimming through C-notes.

Anyway, back in February, the Washington Post was scandalized to discover that Romney rallies were closing with the songs of man-mountain Toby Keith, a bellicose fellow whose music is to '70s country and rock n roll what pink slime is to Angus. Quoth the Post:

The campaign has started using the song “American Ride,” which channels blue-collar unhappiness about immigration, gas prices and political correctness. (“Don’t get busted singin’ Christmas carols.”) It has a sardonic tone that seems out of sync with the genial, G-rated Romney himself.

As does the cursing.

“Daddy works his ass off, paying for the good life,” the speakers boom. Then: “Hot dog! Hot damn!”

“American Ride” is a terrible song, of course, one that whole-hog rips off the riff from “Pictures of Matchstick Men” and then somehow compares America to a totally awesome souped-up car that is somehow being destroyed by im'gints. Its reckless swearing -- “ass,” “hot damn,” “hot dog!” -- has already singed the ears of some evangelicals, including one sad woman who no-shit complained and then got called “bitch” by the right-wing blogosphere.

Still, the song is in lots of ways perfect for Romney, and not just because it's made up entirely of bits nicked from songs popular before it, or because of that line about a hardworking daddy working so hard you now have the cash to gad about the country pretending you know how to save it.

Let's look at TK's words, which butter up America and then warn it's in dire danger -- just like the Music Man selling us a pool table!

The opening lines are “winter gettin' colder/ summer gettin' warmer,” but those are either a mistake or evidence that the Republican Party's understanding of science is less nuanced than Toby Keith's. After that comes the confusing lines about gas being expensive and the warning “Don't get caught singing Christmas carols,” which is a legitimate fear in America today.

Wheat we can learn from other great “American Ride” lines:

“Spill a cup of coffee/ Get a million dollars.”

“Customs caught a thug with an aerosol can.“

“If the shoe don't fit, fits gonna hit the shan.”

In conclusion, Toby Keith lyrics are the new constitution forever. Cover up your shans!