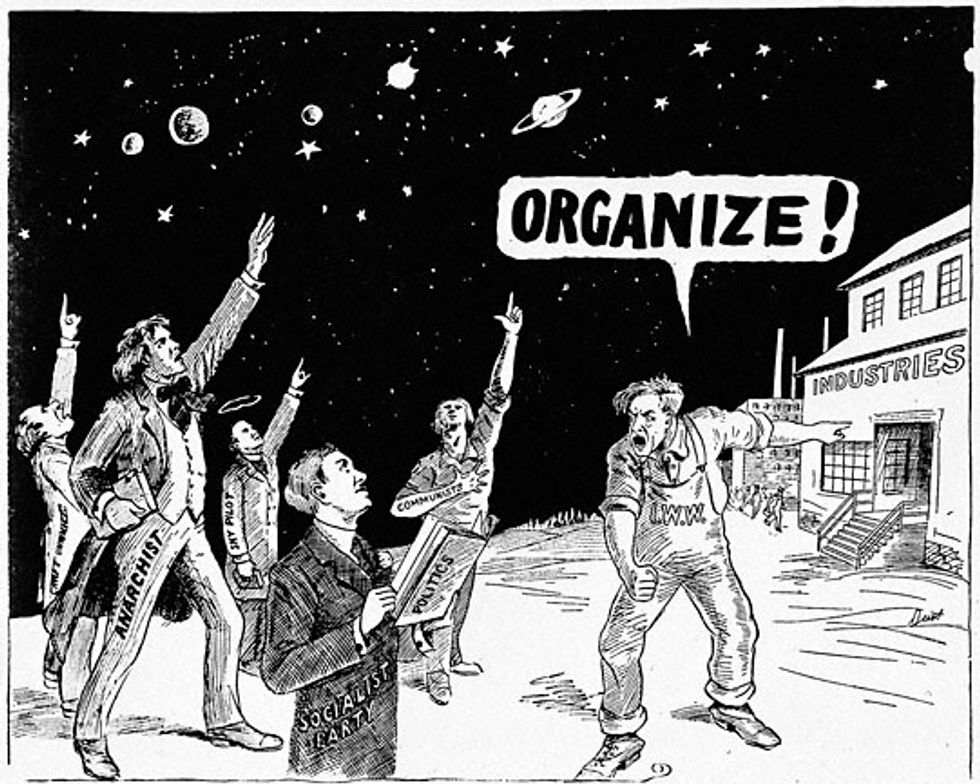 More political groups should say 'You are cordially asked to hop into the parade.' We'd hop!

Since Ken Layne wrote the Ultimate Snarl about Labor Day in America in 2013, it seems a bit redundant to try saying anything more, Honestly, go read it. It's every bit as bleak as the title, "Labor Day Is a Scam To Keep You Poor and Miserable Forever," suggests. And funny as hell.

The thing about Labor Day is that while it was, at least for a few decades during the "Progressive Era," something that workers and unions actually marked with parades and demonstrations and stuff, it's been a long time since Labor Day has really been marked by anything but furniture sales and the mandatory newspaper piece on The American Worker and/or the Decline Of Unions.

The basic irrelevance of Labor Day, as a thing people give any thought to, means the federal holiday succeeded beyond the wildest dreams of those who made it official. The very first Labor Days in the 1880s were organized by labor unions, who went on strike to call for recognition of the union movement; the first organizers picked September 1 as a convenient date because it fell halfway between Independence Day and Thanksgiving. The establishment of the federal holiday was a fairly cynical move meant as a sop to angry trade unionists, in hopes that they'd be happy with a gesture from the government saying "OK, you exist. Good for you!"

As Layne notes, official Labor Day became a federal holiday at least in part for the purpose of de-fanging that other day for workers, May Day, which arose as a rowdy day of marches and protests to commemorate the 1886 Haymarket bombing in Chicago (which was actually May 4, but May 1 as a day for socialist agitation merged better with European spring celebrations). We didn't want no commie/socialist May Day holiday, so Grover Cleveland signed the September Labor Day holiday into law shortly after federal troops killed 30 people while breaking up the Pullman Strike in 1894. If you're not familiar with that particular horror of labor history, go read Business Insider's story -- yet another example of the Powers that Were violently keeping uppity union workers in their place, then papering over the strife with a nice declaration of a holiday.

So don't worry that mattress sales take anything away from the "real meaning" of Labor Day. The holiday was meant to co-opt workers from the get-go.

While putting this piece together, we also had a fine time digging around in the University of Washington Library's IWW History Project, an amazing online archive of the Industrial Workers of the World, which was far more active in the Pacific Northwest than we had any idea. It's disturbing to realize how many people got killed in this country for the insane, radical notion that workers should have basic safety, reasonable hours, and a decent wage. In among the horrors of the Everett Massacre, the Centralia Massacre, and an amazing archive of labor spy reports, we also found this absolutely charming photo of Katie Phar, the "IWW songbird" who grew up singing and collecting union songs. Talk about an adorable little agitator!

She began a correspondence with the IWW activist and songwriter Joe Hill when she was just 10, in 1915 -- months before his execution on a trumped-up murder charge.

So much of labor's history was bloody, small gains in working conditions and workers' rights gained only at a high cost. And never a shortage of thugs to break strikes and beat or shoot union troublemakers. Or their families -- in June 1924, the KKK, joined by men from the US Navy, attacked an IWW hall in San Pedro, California, during a benefit for two workers killed in a railroad accident. They beat up many in the crowd of 300, tarred and feathered several union leaders, and beat Lizzie Sundstedt, a mother of three, so badly that two months later she died of her injuries. Sundstedt had been trying to protect her two daughters and another boy; the attackers got past her and threw boiling coffee on the children. Her oldest daughter, Mae, 12, was photographed in the hospital, suffering burns from the waist down:

Mae's injuries were so bad that when her mother died, two months later, she had to be brought to the funeral on a stretcher.

That's the kind of thing Americans did to each other to keep scary union members from bringing socialism -- or slightly higher wages, same thing -- to the USA. We're remarkably good at that sort of thing. Don't want blacks to vote or go to the same schools as whites? Bomb a Sunday school. We can see why a lot of fake patriots would prefer sanitized history that only looks at great heroes. It's a hell of a lot more cheerful.

And yet. The labor laws changed. The culture changed, some (not enough). No one would pretend things are good -- workers are still largely disposable, but only in terms of their labor; we're a bit less tolerant of machines casually lopping off fingers these days (in America, at least). We have a president who seems to long for the good old days when labor unrest -- even hints of it -- could be crushed by calling out the militia, or the Pinkertons. But the days when strikers or demonstrators could be casually gunned down with impunity seem well behind us, much though Breitbart commenters might like to see them return. And labor organizing even shows signs of life, from fast-food workers' "Fight For Fifteen" campaigns to the folks working to organize Walmart -- and while Walmart always plays dirty, and has shut down stores rather than allow them to unionize -- the goon squads tend to have law degrees these days, not truncheons, so that's progress, yes?

Oh, but there's the pending deportation of 800,000 workers if Trump ends DACA and Congress does nothing to stop it. You can tell we're big optimists here, since that wasn't "when."

Yr Wonkette is supported by reader contributions. Click the "Donate" linky, and we'll keep toiling in the snark mines -- for you!