A Fun End Of Day Post With Only A LITTLE Murder! 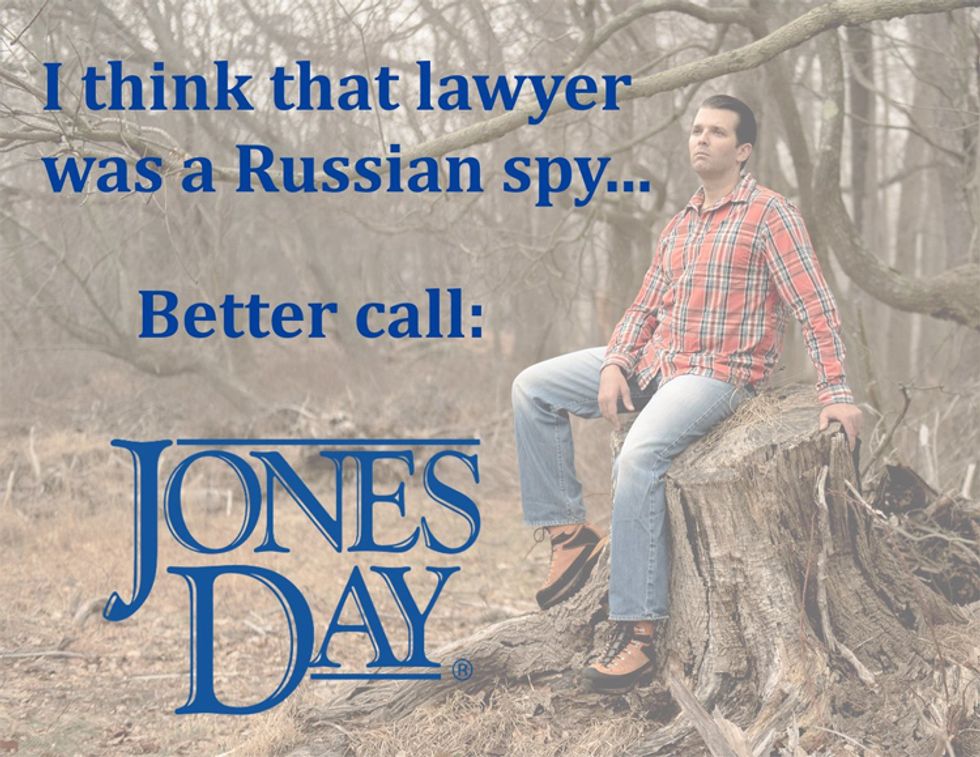 Sometimes crushing a vile beast will require many words. The best words. So pop an Adderall, dear reader, and let's go.

Now, law school was easy for me, sure, but my wife positively crushed it. She was dead-set on public service -- had been since the age of six -- but the on-campus recruiters from the big firms hounded her. One was doggedly insistent that she apply for an internship. A recruiter from Jones Day. He said it was something you don’t say no to. Jones Day bills itself as the nation’s largest law firm. It employs 2500 lawyers on five continents. It has a revenue of $1.94 billion.

So my amazing wife (and you’re about to see why she’s my wife) submitted this cover letter to the esteemed legal institution.

Regrettably, she did not get the internship. Don’t worry though. Today she is gainfully employed. A big loss for Jones Day, a law firm which began in the late 1800s in Cleveland happily assisting railroads, private utilities, and oil moguls.

As my wife mentioned, their founding partner -- the enigmatic William Lowe Rice -- was murdered in 1910 under shadowy circumstances.

Rice, who is unfailingly described as “debonair,” was a well-known pillager of troubled companies. He was stabbed and shot outside his home.

Accounts of the aftermath describe an unsurprisingly racist investigation, fueled by the supposition that white men do not use knives:

By the way, I cannot over emphasize how much White America was freaked out by Italians at this time. They were viewed as an existential threat.

Imagine how the Right currently feels about Muslims, Mexicans, Antifa, & BLM. Now combine them, and dial it up to 11. That’s Italians in 1910. Check out this newspaper column about the murder, with its panicked headline ?“FOREIGNERS NEAR BY”?……

But Rice was murdered right outside his home, and his attacker ignored his cash and the obscenely valuable items on his person. Most historians believe it was a professional hit ordered by one of Rice’s many enemies. But nobody is exactly sure which one. And that should tell you pretty much all you need to know about Rice, a man whose spirit lives on in the brutal colossus he helped build.

Today, Jones Day is big and bloated and does many terrible things, like that Dana Corporation bankruptcy deal my wife mentioned in her letter. Jones Day says they are specialists at helping large entities solve financial catastrophes with strategies to “alter their debt obligations.”

Take a wild guess who always gets screwed in those types of deals.

Like the time when Jones Day found a way to get paid millions to help banks feast on the corpse of the once great City of Detroit.

Jones Day represented most of the banks which lay claim to Detroit’s debt of $13 billion, including Citigroup, Goldman Sachs, & Merrill Lynch. So it seemed weird when the state hired Kevyn Orr, Jones Day partner, to become unelected czar of Detroit, managing all its fiscal affairs.

But don’t worry, he resigned from the firm before assuming control…And then hired Jones Day to oversee the city’s bankruptcy deal. And when they were done, Mr. Orr rejoined the firm as partner again. Because of course he did.

And surprise surprise, the Detroit deal was widely seen as benefiting the banks and creditors while screwing over pension holders. Police & Fire workers got a 40% cut in cost of living adjustment. The remaining city workers lost the adjustment entirely. And lost a piece off the top.

Sorting out what went down in Detroit is too big a tangent on which to go off, but I assure you it was a hyena rodeo from start to finish.

Hundreds of Detroit residents and pensioners traveled to Jones Day’s Cleveland headquarters to protest the firm’s handling of the bankruptcy.

These Jones Day attorneys, who couldn’t look more ghoulish if they tried, came outside to watch.

Because as Richard K. Morgan wrote: “Rip open the diseased heart of a corporation, and what spills out? People.”

People like Jones Day partner Don McGahn, the new White House Counsel who has been doing a whiz bang of a job.

The amount of influence now held by Jones Day insiders is unparalleled.

And these lawyers were given a blanket waiver from compliance with anti-revolving door ethics rules, so that’s fun:

Then, Jones Day began advertising its access and influence in the White House, because of course they would openly sell that. They are shameless.

And let me say that it is unfair to completely single out Jones Day like this. All big law is basically trash. And some “Big Firm, LLP” attorney might tell me about the pro bono work they do or the Guatemalan t-ball team they sponsor or whatever. Or how their firm is bad, but they are a part of a practice subgroup that protects IP for fair-trade biodiesel fidget spinners.

But make no mistake: Those institutions are built on a pile of broken dreams and paralyzed children. They are towers of stolen money and lives. And the bulk of their activities which are not downright sinister are simply parasitic. They’re vampire squids wrapped around the face of humanity.

Try and tell me that perfectly straight line of five apples doesn’t send shivers down your spine. That place has bad mojo.

But I guess the biggest reason to pick on Jones Day is because they are UNUSUALLY unamused by this type of stuff. A couple years ago, a small parody blog ridiculed Jones Day over its Detroit regime. They included this image, among others:

A Texas Billionaire, The Stripper He Beat Up, And The Mugshot He Doesn't Want You To See

Marcus Hiles could use a little publicity.

Jones Day responded aggressively, sending the blog a letter threatening a trademark suit. It really got them worked up. The letter from Jones Day states, ominously: “Your conduct will be closely monitored." The Electronic Frontier Foundation wrote Jones Day a letter shutting that nonsense down while teaching a few lessons about parody of a corporation. As a letter, it’s less strange and caustic than I usually advocate, but still good. Here is a copy. (Sidenote: You notice there is a trend in my stories of the powerful trying to silence people when they are being mocked? Yeah, that’s intentional.

Anyway, because Jones Day got so incredibly rekt by EFF, I feel safe posting my suggestions for Jones Day advertising campaigns:

Whether you’re a struggling CEO who thought they had a way out:

Or if you’re a multinational oil giant who didn’t call 911:

Or a slow-witted fail-son who should not have taken a certain meeting:

Or a battered municipality with creditors ready to liquidate your community:

So spread the word everyone, I’m sure the @JonesDay social media manager would have a terrific day if my new ad campaign really takes off. Anyway, I gotta run. I’ve got a potential new client in a lawsuit against Chuck E. Cheese Pizza:

Now it is your OPEN THREAD.

Wonkette is ad-free and bringing you THE BEST THINGS ON THE INTERNET. Please give us money.