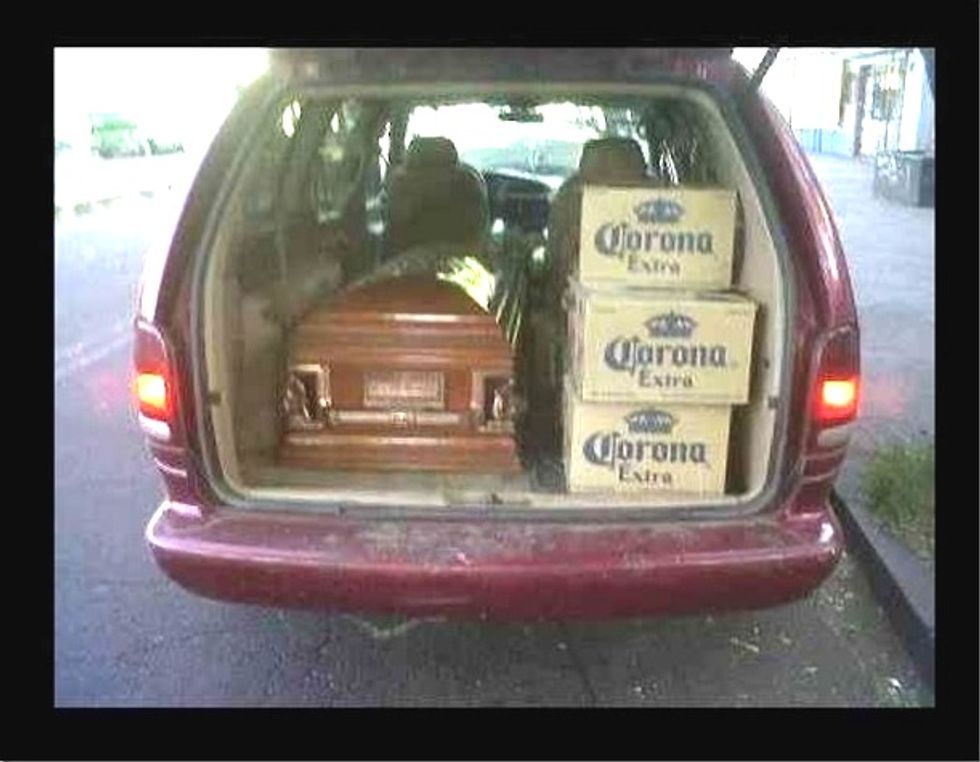 They say deaths and other bad things come in threes. First we lost David Bowie, and we are not over it. Then Thursday, we learned beloved actor Alan Rickman had left us and we won't be over that one for a while. And now an Obama-hatin' dingus militia leader has shooted his pal, ANOTHER Obama-hatin' dingus "patriot" sort of guy, right in the face and killed him dead. Oh, the humanity:

Vincent Smith, a right-wing organizer for the Paul Revere 2016 Final March to Restore America, fatally shot his co-founder Charles Carter in what appears to be self-defense during a drunken argument. The two men were organizing the march from the west coast to Washington D.C. with the intent of “removing the corrupt leadership that has taken over our beloved country and ousted her God and constitution.” [...]

According to Bill Williamson, a friend and the failed organizer of 2 Million Bikers 2 DC, Carter was drunk and took Smith’s gun from his holster, at which point the sober Smith reacted quickly and pulled a spare gun, shooting Carter once between the eyes.

The only defense against a bad guy (who is your buddy) who drunkenly steals your gun is to be a good guy with an extra gun who can bumrush the active gunman/best militia pal and murder him in the brain.

Sorry, we are being dicks, and this is a very serious obituary post.

The patriot-type tough militia dude quoted above, Bill Williamson, said to the Facebook that nobody is in big trouble, mister, because everybody, the U.S. Marshals included, said the shooty-bang-bang was self defense:

God, they were all Facebook BFFs, weren't they? Charles was sending Bill drunk cat emojis and, and then he grabbed Vincent's gun (LIKE A COMMON TYRANT OBAMA), which caused Vincent to shoot him dead with his other gun, and then Vincent probably updated his Facebook status to say "Oh no I did a bad, sadface. LIKE if Obama is a Muslin. SHARE to Make America Great Again!"

Charles probably signed off Facebook right then, because dead.

ANOTHER patriot-type dude, Keith Williams, whom Raw Story says is an online radio host and the dead guy's next-of-kin, announced the news, again, on Facebook:

I'm sad to forward this message Charles Carter was one true red blooded American who loved this country and his brothers and sisters in arms. Attached is a letter from a very close friend of his about what happened spread the word. Dear friends it's my dearest regrets to have to share this heart breaking new with you tonight. That OUR fellow patriot and brother Charles Carter is no longer with us . He gone to be with Jesus. Today killed by a fellow patriot Vincent Smith. Who was suppose to be his brother in arms and friend.

ANOTHER patriot-type militia dude, name of Joe Bleaugh, was a BFF of the shooter, and he said a Facebook too:

Joe Bleaugh, a friend of Carter’s and a member of the Idaho Three Percent movement, which is tied to the Pacific Patriot Network who approached the Bundy militia with “Articles of Resolution” this Sunday, said in a Facebook post that his friend had “violated one of the first rules of firarms [sic] safety.”

Oh yay, we got to the Bundy connection, mentioned the Idaho Three Percent Movement and glory hallelujah, we think we just filled out our armed white militia dude bingo card! Wait, where are the Oath Keepers? Meh, probably in there somewhere, who cares.

So these guys were all excited, because they've planned this Paul Revere 2016 Final March To Restore America thingamadoodle, all the way to DC, where they will stop all the tyranny, and according to the march's Facebook page, once American tyranny is shot between the eyes with a gun, they're going to fix Europe tyranny and China tyranny and all the other tyrannies, so help them God:

I Swear to God when we are done restoring America we will reach out to our brothers and sisters world wide and save them from the Tyrannical threat that at this moment is consuming them. I speak of Europe, Australia, and the entire western and third world.

This is accompanied by a Bible verse written in the traditional font of burly macho militias: