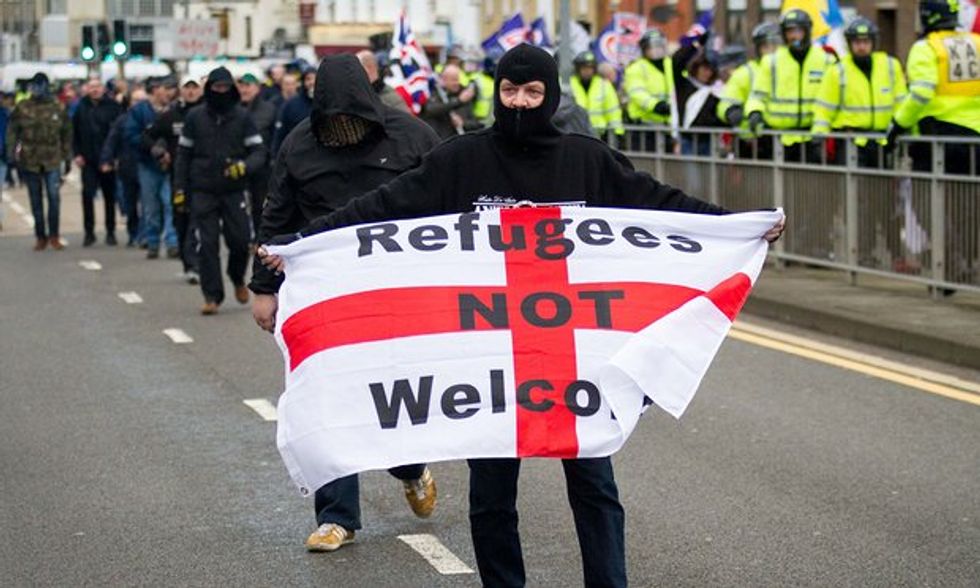 Look at those dirty neo-liberal elites!

Bleeding-hearts have been blaming Great Britain's disastrous Brexit referendum on too-obvious factors like racist, xenophobic political parties that backed the Leave side (as if racism is even a real thing any more). Donald Trump has been taking credit for it himself, because of course he has. But wiser heads have pointed out the Real Killers of Britain's membership in the EU -- those pesky lefties!

There is no consensus about which sort of pinkos should get the blame (or credit!) for 52 percent of voters in the United Kingdom choosing to leave the European Union last Thursday. Some, like Texas Gov. Greg Abbott, think it was the Socialists, so he twatted his deep thought this weekend at some German lady:

Abbott (probably): and the Nazis were Socialists, too!

Ha ha, that was no lady, that was the Chancellor of Germany, a socialist hellhole afflicted by low unemployment and a thriving manufacturing sector!

Many, MANY American True Conservatives™, while rejoicing at Britain deciding to to fight back against the space aliens, credited insidious sekrut liberals also known as their fellow Republicans for the nationalist uprising of Leavers.

Mike "The Human Rectal Prolapse" Huckabee took to the pages of Dead Breitbart's Secure Centre for Incurably Awful Humans to hicksplain this. Huck reckons it was a patriotic backlash against RINOs like David Cameron and Speaker of the U.S. House Paul Ryan, who defend "multi-culturalism, unbridled immigration policies and the siren song of globalism." Y'know, Muslims.

But right-wingers weren't the only wing to blame the neoliberal establishment for forcing so many Britons to embrace xenophobia. Known Bernie Bruh Glenn Greenwald used one million words to blame immigrant backlash on unfeeling elites keeping all the munnies, forcing the English working class to hit back however they can.

We know many of y'all love being hectored and lectured by Greenwald, who doesn't write columns so much as pro bono legal briefs. But we are unconvinced by "globalism causes inequality causes racism" arguments. Young Britons, who are far more affected by rising income disparity and entry-level job competition than their elders, voted overwhelmingly to remain in the E.U. Their pensioner grandparents, insulated from wage rates, voted to keep out the scary people. Also, we're not sure how the 1 percent managed to account for 48 percent of the vote.

Greenwald did cite a much better explanation of Brexit, by British writer Tom Ewing, so h/t for that. Short version: it's complicated, but largely explained by the skillful lying by Leaverites, stupid brinksmanship by Cameron, and old people being bad at history and economics. Plus some real economic pain.

Don't get us wrong, the EU, British and international organizations do share blame for policies that helped UKIP's bullshit to find a receptive audience. But the tool that has bludgeoned much of Europe, and particularly Europe's working class, for the past decade has been budget austerity. And that's based on Austrian School economics so loved by big brained "neo-liberals" like Newt Gingrich, Glenn Beck and Ted Cruz.

It would be possible, one might argue, for the EU, World Bank, and IMF to improve themselves simply by listening to Paul Krugman a bit, rather than being replaced by "democratic" financial systems of the sort Greenwald favors. But what do we know, we are a penis-joke blog.

Anyways, we wouldn't like to end on Greenwald, whose wrongness is a micro-apartment in Whoville compared to the Horton-sized wrongness of everyone's favorite incompressible jizztrumpet, Donald J. Trump. What caused Brexit, O ferret-wearing shitgibbon?