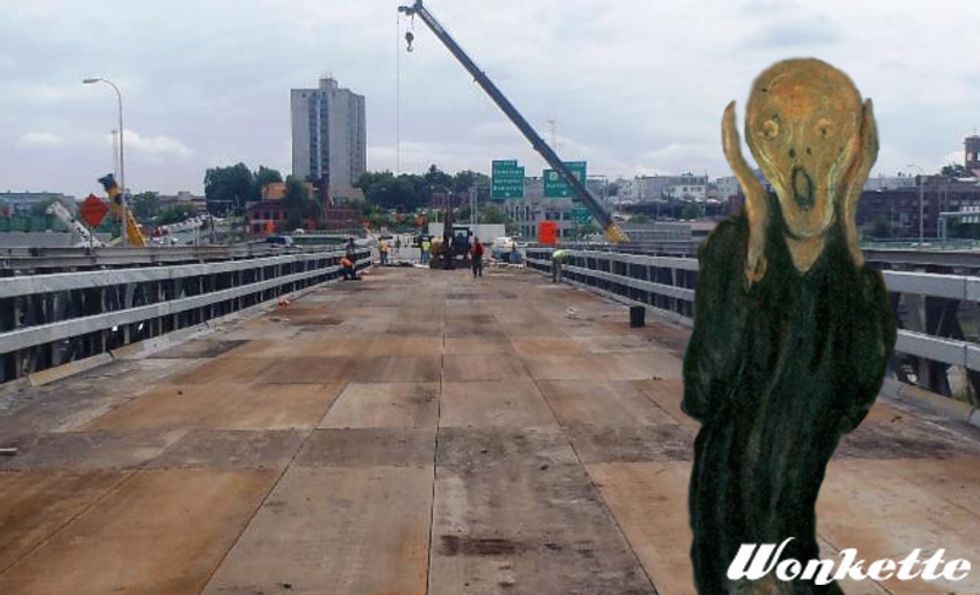 If you want a vision of the future, imagine a hand sneaking into everyone's pocket...forever

From Providence, Rhode Island, comes this tale of what Donald Trump's glorious infrastructure plan might look like: much, much higher costs to states and municipalities that want to improve their roads and bridges and tunnels. You see, the Rhode Island Department of Transportation needs to replace bridges and a freeway interchange on Route 95, smack in the middle of Providence. They had already applied for a federal grant to help fund the project under the Obama administration, under a program called "FASTLANE." But that program was killed off by the Trump administration and replaced with something called "INFRA," which sounds like it should be based in a dormant volcano and headed by a guy with a monocle and a Persian cat. The big difference between the programs is that INFRA is a "public-private partnership," meaning that instead of financing the road and bridge project with government bonds, the state will have to get financing from private equity, because the private sector does everything with maximum efficiency.

And how maximally efficient is the new scheme? To build what's essentially the same project, the cost will go from $226.1 million under the original plan to $342.9 million with the new one. The biggest chunk of the increased costs will go to cover interest on a $45-million private loan and a “15-percent return to the private partner," as mandated by the new Trump rules.

The bridges are in terrible shape, carrying a lot more than their original design anticipated, and need constant maintenance to keep them from a critical failure. Beyond being old, they're badly adapted to current traffic needs, and a complete redesign of the interchange is needed to reduce congestion. All that was accounted for in the grant submitted last year, but the new funding from the federal Department of Transportation is only available with an assist from a for-profit equity funder, which means it will be far more expensive -- even with the elimination of a $15 million pedestrian bridge that had been included in the design from last year. Just as well, since as everyone knows, pedestrians and bicycles are part of the UN agenda for world domination.

“When the [Trump] administration came in, they stopped the FASTLANE process and redefined the grant guidelines. The new guidelines encourage states to find private partners and to take more of a role in funding projects,” Pettengill wrote. “With these guidelines in mind, we redefined the project to fit those new grant requirements” [...]

“This delivery method created additional costs, particularly due to the costs associated with private sector equity funding the project,” she wrote. “We are seeking the new grant to offset those costs.”

While the Trump administration hasn't yet put forward a formal plan for its promised trillion-dollar infrastructure bill, Trump has said from the campaign going forward that it will largely rely on public-private partnerships for funding, to reduce the amount of federal outlay for infrastructure. That sounds great until you realize it translates to much higher costs for the states and cities that want to upgrade roads, bridges, and tunnels, all so that some private equity firms can get a piece of the action. You might almost get the impression that Trump is less interested in fixing the nation's infrastructure than in steering hundreds of billions of dollars to middlemen, huh?

For a detailed 'splainer on why public-private partnerships are not the wonderful deal the name implies, check out this fine piece from the Center for American Progress. Rhode Island may be getting off easy, it turns out, since equity capital can cost "300 percent to 500 percent more than capital raised through traditional municipal bonds." And unlike a direct transportation bill, the traditional way of getting infrastructure done, public-private partnerships aren't usually aimed at funding maintenance, just construction of beautiful new expensive projects that have to be paid for with user fees or tolls. And if you're in a rural area that can't generate the toll revenue to pay back those big loans, tough luck -- you'll just have to keep patching the potholes and hoping the bridge holds a few more years.

On the plus side, maybe local governments can take a lesson from Donald Trump and save some money by simply not paying contractors once the work is done. Just say you didn't like the job they did.

Yr Wonkette is supported by reader donations! Click here to pay your user fee and keep our writers from collapsing.