A Lot Of Americans Making Black Friday Green With Trips To Pot Stores. While Others... 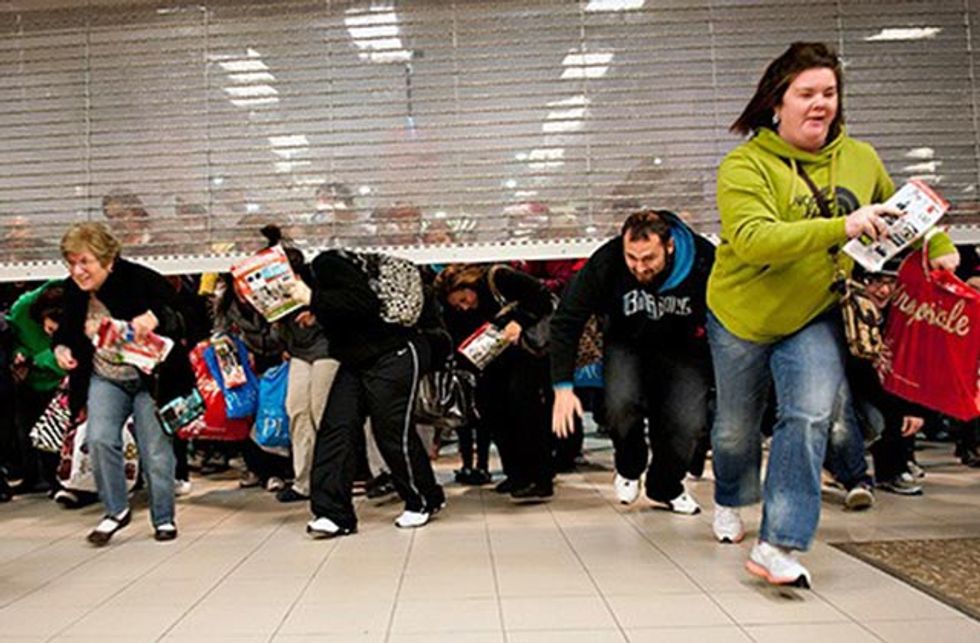 A moderate discount and a couple of days spent with the family are all that is needed to drive people to marijuana dispensaries in huge numbers on Black Friday.

Demonstrating that well-known pothead initiative, customers line up early in the morning in order to top off their stash and buy holidays gifts that loved ones actually want. Forbes reported no fights among customers over delectable hash oil.

Black Friday and "Weed Wednesday" promotions are big winners for brick and mortar weed stores and for online purveyors as well.

[Baker CEO John] Milton said that concentrate orders tripled on the Wednesday before Thanksgiving. Last year, they experienced a 55% increase in transactions on Wednesday and a 28% increase in average order size.”

Of course, these products make it easier to escape to the bathroom and vape up when Uncle Stan starts talking about how Betsy DeVos will return education to the idiot parents instead of the stoned teachers. Just like what Jefferson would've wanted.

And speaking of Jefferson, pot users are fully encouraged to make use of Black Friday sales because along with immigrants and minority rights, marijuana belongs to likely Attorney General J. Beauregard Sessions's "Axis of Evil." Just ask the esteemed Klan. So who knows if the Federal Government will soon dismantle an industry that brings a lot of money and jobs to a lot of states. Happy Danksgiving, everyone.

In Canada, fights are reserved for disputed calls at youth hockey games, not for angry shoppers fighting over a discount microwave. And some Canadians are here (or in Winnipeg) to tell us about it.

The anti-consumerism movement, Buy Nothing Day was founded in Vancouver in the 1990s. It encourages consumers to use one of the busiest shopping days of the year as a way to spend time with family, instead of spending money.

Theses dangerous and radical ideas are just the kind of thing making our tar sands step-siblings to the north weak and genial. But not all Canadians share these skewed priorities. Take this suit:

Manitoba Chambers of Commerce head Chuck Davidson, said he is fully in favour of Black Friday, as it’s

the second biggest shopping day of the year. Davidson added that although he believes in the benefits of consumerism, he does respect people’s choice voice their distaste for Black Friday.

Wow, please ease up on the harsh rhetoric, Mr. Davidson. It's the holidays.

It's kind of funny to make fun of dads fighting over a department store television on stupid sale days. Americans and their property haha! But this year two real deaths have already been reported.

In Reno, a man was shot and killed in a dispute over a Walmart parking spot.

In New Jersey, two people were shot outside of a Macy's at 1:00 a.m. on Friday. One of the men died.

If you are prone to road rage, stress out about crowds, or are just looking for some fresh air, please make other plans. Black Friday store visits to behemoth corporate chains Are. Not. Worth. It. If you need cheap food and clothes, there are places from which you can purchase these items that don't pose risks to your well-being. Be safe out there. Nobody gets buried with a 70-inch flat screen television. Maybe Roland Burris, but that's a real deep cut of a reference.

Or just stay home and purchase whatnots and sundries from your favorite family-owned small business, we mean us.