A Number of Cartoons That Will Enrage David Denby 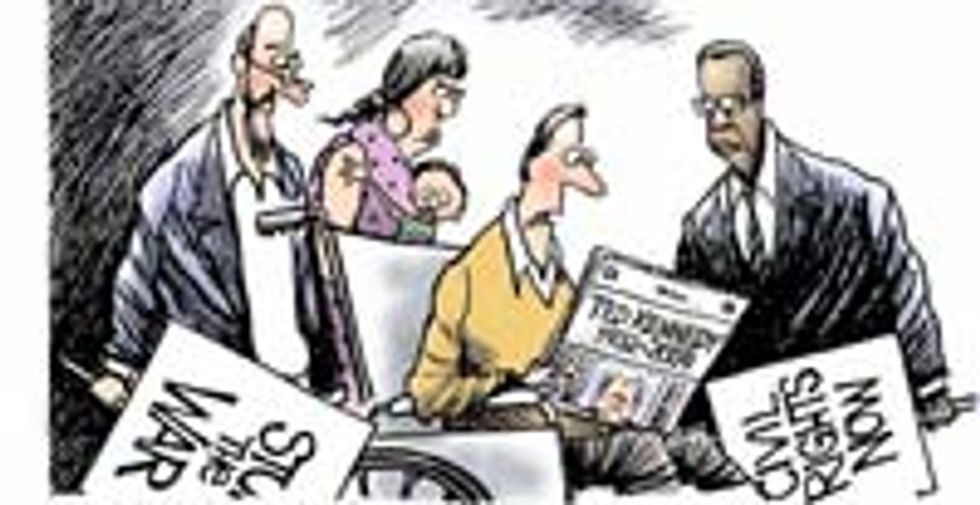 By the Comics Curmudgeon
If there is one thing guaranteed to enrage America's arbiter of good taste, it is making any kind of snide remark about Ted Kennedy when he is ill or, in the current case, dead. Naturally, this rule has been flouted relentlessly for the past two days by the crassest, most awful people in the world, which is to say political cartoonists. Who are these heartless monsters, and why do they try so very hard to ruin our national conversation about how much we love Ted Kennedy?

This cartoon trots out an old canard about the Kennedy family in general -- that they are hypercharismatic cult leaders building an army of liberal zombies who will do their every command (these commands generally involve destroying America, with socialism). Look at this cadre of Kennedy revolutionaries: a mother, an African-American gentleman, a man in a wheelchair, and bald beardy dude with a sign. They stare, numbly and glassy-eyed, at the newspaper announcing that their leader has passed on. Who will lead them to victory now? What do they have to live for?

This cartoon purports to honor Kennedy but in fact shames him, with its extreme generic-ness. Isn't it convenient that our point of view up here in the heavenly firmament is from behind Teddy's recently ascended soul? Because that could, quite frankly, be the soul of anybody who was classy enough to go to Paradise wearing a suit. The label on his back (and in heaven everyone has to wear labels, because there are so many people from different eras up there that even very famous people need a way to be easily identified) and God's booming dialogue could easily be swapped so this cartoon could be used again and again for any other future cartoon-worthy deaths. Is it physically possible to get any lazier?

You sure bet it's possible! Just slap a Kennedy quote on top of some Zip-a-Tone, put his birth and death dates in small print at the bottom, and bam! You're ready to head to the golf course! The debate about whether the thing you just produced meets any of the criteria for cartooning as a medium is left to the eggheads who care about that sort of crap.

This cartoon implies that Ted Kennedy was some sort of freakish giant who required an enormous chair the size of dozens of ordinary chairs just to support his enormous frame. It is unclear whether this cartoon is hostile towards Ted Kennedy or not. On the one hand, giants are very large and powerful, and are therefore badasses. On the other, giants are often depicted in a negative light in the media and in literature, always smelling the blood of Englishmen and attempting to grind their bones into horrifying bone-bread. Thus, this cartoon may in fact be an anti-Irish slur.

This cartoon has the guts to tell the truth: that America loved Ted Kennedy, and loved him dearly, because of Camelot, and now the Democrats are going to ruin the beautiful mourning over him, by crassly injecting terrible politics into the discussion of the legacy of someone who had been a Senator for more the 40 years. Jeez, Democrats, Kennedy was just a legislator and presidential candidate and holder of any number of strong political opinions! Why are you ruining his funeral, with your politics-tree? Get with the program!

This cartoon captures the true totality of the man, which is to say his universal totality: he was both good and evil, light and dark, angel and devil, Ahriman and Ahura Mazda, the Manichaen duality from which all forces in the universe flow for good and ill. He also had prominent and easily caricaturable teeth.

This cartoon implies that Ted Kennedy was a furry.