A One Hundred Percent Trumpless Appreciation Of Elie Wiesel, RIP 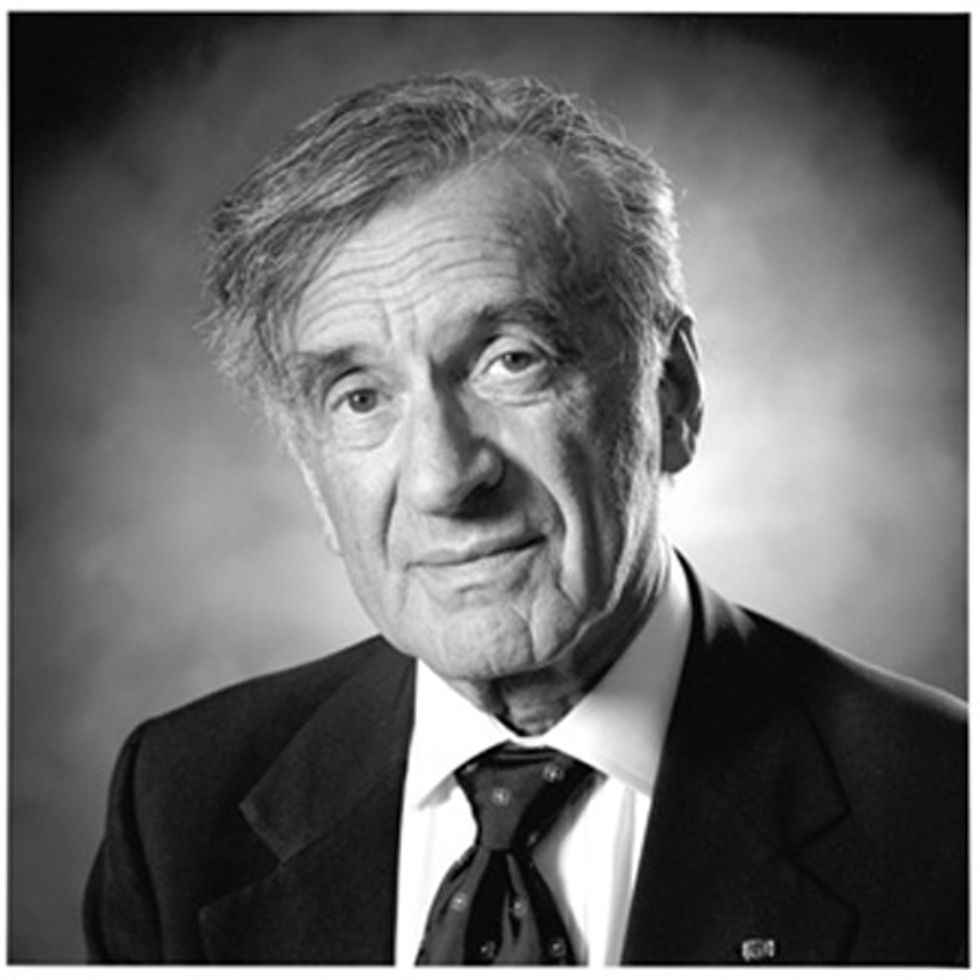 I'm fairly sure the first time I ever heard of Elie Wiesel was when he appeared as the designated philosopher among a bunch of political and strategic experts on the ABC News panel discussion that followed the 1983 TV movie The Day After. You can count Carl Sagan as the other humanist in the group, which also included Henry Kissinger, Robert McNamara, Brent Scowcroft, and William F Buckley. I was a college sophomore with a head full of Kurt Vonnegut and a dread that Reagan would get us all killed. I instantly fell in love with Wiesel, because where everybody else wanted to talk policy and deterrence and arms control, Wiesel's first commentary was on such a purely human level, especially after Kissinger pooh-poohed the film for presenting "a very simple-minded notion of the nuclear problem" because it merely dramatized what everybody already knew: A nuclear war would be very bad. Wiesel brought the conversation back to that "simple" point, because it really was the point.

Not being a nuclear specialist in any way, I'm scared. I'm scared, because I know that what is imaginable, can happen. I know that the impossible is possible. I've seen the film, and while I was watching it, I had a strange feeling that I had seen it before -- once upon a time, it happened to my people. And now it happens to all people. And suddenly I said to myself maybe the whole world, strangely, has turned Jewish. Everybody lives now facing the unknown. We are all, in a way, helpless. We are talking about nuclear arms, about the Bomb with a capital B, a kind of divinity in itself. Unless those who know, militarily, what it means -- we readers, writers, people -- we don't know what it means. And I hear about thousand bombs, [sic] megatons -- I don't have that kind of imagination. To me it's an abstraction. But to me, all this means is that the human species may come to an end, that millions of children will die.

The moderator, a ridiculously young Ted Koppel, noted that in the 1930s, when faced with a great evil, many people "with the best of motives" turned to pacifism, and that very principled refusal to stand against Hitler led to catastrophe. Wiesel agreed that "pacifism in the absolute sense would be dangerous," because what if a Khomeini or other dictator gets the Bomb? But then there's the paradoxical insanity of Mutual Assured Destruction:

Somehow, we're still here, and of course arguing (in far shoutier teevee shows, though the televisions themselves are nicer) over whether the Elie Wiesels and Carl Sagans or the Henry Kissingers and the Ronald Reagans ended up "winning" that argument. The answer is neither, of course, thanks to the USSR collapsing under its own incompetence, plus a whole lot of East Berliners who wanted to go shopping.

That 1983 panel was pure Elie Wiesel: the humanist who has very little reason to trust humanity, because he's seen the absolute worst of what humans can do to each other. Wiesel always reminded us how close we are to letting it happen again -- maybe never again on the same industrial scale as the Holocaust, but organized murder is always ready to break out somewhere when one group of humans decides another group of humans is expendable, so unlike us that it's acceptable to declare them inhuman and worthy of death. And if we convince ourselves that God Almighty wants those other people dead, well then, we'd actually be sinning if we didn't exterminate them. It happened again this weekend, in Baghdad.

In 1985, Wiesel had the courage to tell Ronald Reagan, when the President was awarding him a Congressional Gold Medal of Achievement, not to go to lay a wreath at the German military cemetery at Bitburg, where SS men were buried.

“That place, Mr. President, is not your place,” he said. “Your place is with victims of the SS.”

Reagan went anyway. The problem with being a moral compass is that people are happy to ignore moral compasses. Or to paraphrase Kurt Vonnegut, the role of the artist may well be as a canary in a coal mine, for whatever good it does. During the Vietnam war, Vonnegut said, plenty of artists "chirped and keeled over," yet the war went on.

Nonetheless, we need to listen to the damned canaries. Let's unapologetically steal a thought from Rachel Donadio's fine 2008 essay on the publication history of Night. Like so many works of genius, it was rejected again and again before finding a publisher in France -- and then the English translation went through another cycle of rejections as well. Its power comes not from its being a story of survival, but from its utter rejection of redemption:

To Lawrence L. Langer, an eminent scholar of Holocaust literature and a friend of Wiesel’s, what sets “Night” apart is a moral honesty that “helps undermine the sentimental responses to the Holocaust.” To Langer, “Night” remains an essential companion — or antidote — to “The Diary of Anne Frank.” That book, with its ringing declaration that “I still believe that people are really good at heart,” is “easy for teachers to teach,” Langer said, but “from the text you don’t know what happened when she died of typhus, half-starved at Bergen-Belsen.” Wiesel takes a similar view. “Where Anne Frank’s book ends,” he said, “mine begins.”

Elie Wiesel made it his mission to remind us to listen to the survivors -- primarily and always the survivors of the Holocaust, but all the survivors -- not as those who "made it out," and good for them, but as stand-ins for all those who did not. Survivors warn us against what we're capable of in the name of a cause, and for the sake of our own survival, for that matter. Wiesel resisted easy answers, and in the case of Auschwitz, any answers. In Night, Wiesel, then just 15, witnesses the Nazis hang a child, a Dutch boy who had "the face of an angel." Another prisoner asks, "Where is God?" and Wiesel answers to himself, "He is hanging from that scaffold." Wiesel returned to that question in a 1997 essay in which he made an uneasy peace with God:

Auschwitz must and will forever remain a question mark only: it can be conceived neither with God nor without God. At one point, I began wondering whether I was not unfair with you. After all, Auschwitz was not something that came down ready-made from heaven. It was conceived by men, implemented by men, staffed by men. And their aim was to destroy not only us but you as well. Ought we not to think of your pain, too? Watching your children suffer at the hands of your other children, haven't you also suffered?

We're not sure we can agree with Wiesel's concern for God here, but that was his faith -- and if believing that our acts of inhumanity make God suffer helps keep us from such cruelty, we're good with that, too.

[NYT obituary / Night at Amazon.com / NYT on Night's publication history / "A Prayer for the Days of Awe" by Elie Wiesel]