A Polite Disagreement With The Universal Outrage On The Catcalling Video, Or, It's Okay If You Would Like To F*k Me 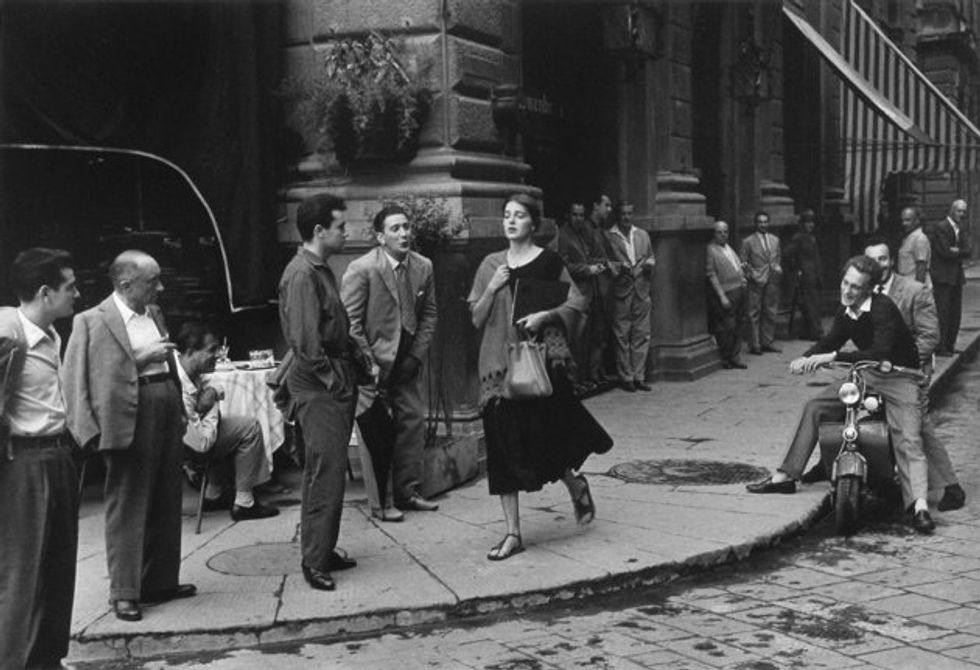 Sometimes, when I read the Twitter, I feel myself morphing into Andrea Peyser or the dudes on Fox News. Case in point! The"catcall" video from evvvvery day, alllll week, which everybody is very SEE!???! about. There is much outrage from our feminist sistren, and much shamed head-hanging from our feminist men.

But the video -- of a white woman walking through the mean streets of New York City, being greeted almost 100 percent respectfully by a cavalcade of mostly minority men because they edited out all the white guys -- well. This is what has us upset today? Too many people said "good morning" and "good evening" and even leered "God bless"?

(Nota bene: Please do not follow a woman for five minutes, you're the worst; and instructing a woman that she should "say thank you" for your compliments is disgusting, unless you are her mother. But greeting a woman? Addressing her pleasantly even though you have had no introduction because we don't actually live in Regency England? Some of us would politely raise our hands and demur when faced with the UNIVERSAL OUTRAGE at that.)

Babyfeminist sisters, I am not trying to #slatepitch you. You can take offense to whatever you'd like. We all have different limbo bars for outrage. I would personally get offended whenever I was walking my dog in a robe and slippers at 6 in the morning, and the gentlemen trawling my LA neighborhood for the trans* sexworkers who occupied it overnight would slow down to ask my price. I also get offended when someone comments on a particular body part; often, when someone comments on someone else's "nice tits," they say it with a sneer, as if they do not think those tits are nice at all!

(One particularly angry-looking middle-aged fellow snarled "NICE TITS" to me in a truck stop diner in rural Colorado, while I was lunching there with my eight-year-old boy. I stopped and asked, my face composed, if he was really going to talk to me that way in front of my young son? He, of course, was a GIANT PUSSY, and said nothing back, just avoided eye contact and seethed. But he undoubtedly went on to rape and murder some truckstop girls, so I guess that was a win for him.)

"But it's the privileged demand for her attention!" I hear my little sisters cry. "It's the weight of so many interactions piling up over time!" Well, I am not calling you delicate flowers. Personally, I like it when men tell me I am looking fine this morning, even if they say it like they would like to do sex on me, and even if it's as often as every six minutes. I usually even say thank you instead of punching them in the face, unless I'm lost in my own thoughts. You don't have to say thank you! You can yell at them, or something, I guess. Then you can yell at someone for holding a door. Different strokes!

There is genuine gross street harassment, meant to demean us and make us feel like nothing more than three-holed fuckdolls. But when you're mad because too many people say hello to you, you seem, to me, to be coming to the end of outrage.

You want genuine street harassment? Walk by a frat house, or through the tailgaters in a baseball stadium parking lot. There will be very few pleasant, respectful "good mornings" or even "you look very nice today!" It will be instead about what those nice men will do to your body, quite graphically, and not at all polite, at all!

I like living in cities where the sidewalks are interactive, where people look at each other and acknowledge each other and even wish to put their penises into women's vaginas. When I think of cities where we can "walk down the streets minding our own business," I think of a city where humanity's lost, and everyone hurries through it, head down, looking at their iPhones in their matching gray suits. To me, that's a sad dystopia. Even if it makes me Andrea Peyser now.