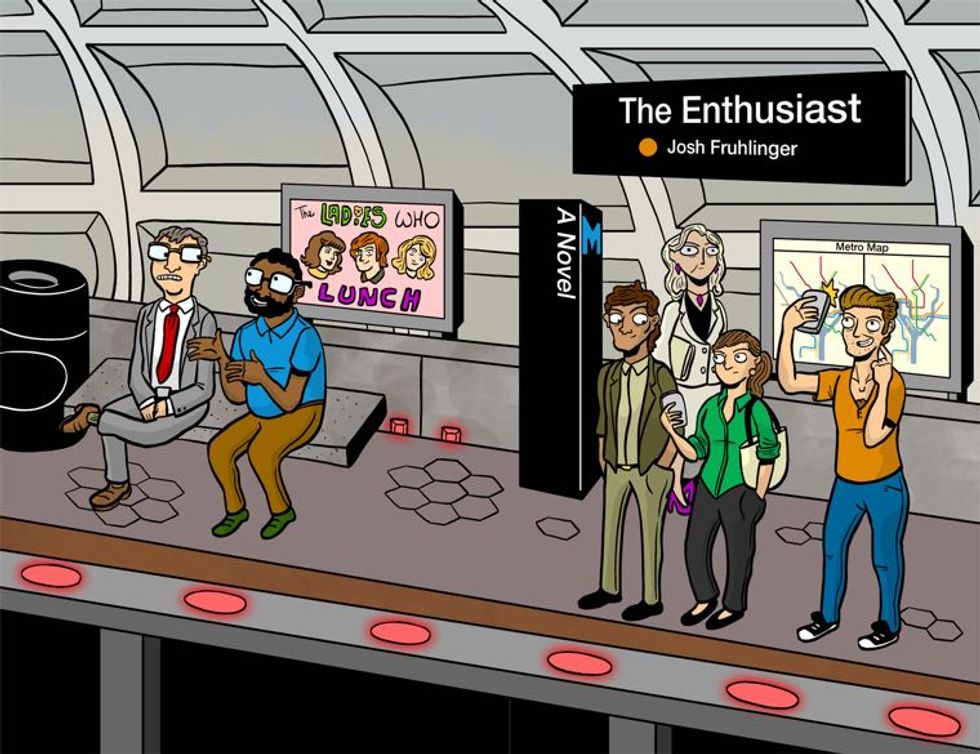 Hello cheery Wonkette people! It is I, Josh Fruhlinger, whom you may vaguely remember as the guy who used to make fun of political cartoons around here, and also do regular (?) blogging as well, before I abandoned you. Anyway, let me confess something to you all: I have always wanted to be more like Wonkette immortal Sara Benincasa, specifically in the senses that she is (a) relentlessly productive (having just signed her eleventeenth book contract while also writing a screenplay) and (b) she is not shy about promoting her awesome stuff! So, in an effort to follow in her footsteps, I hereby am following in her footsteps and reviewing my own book, The Enthusiast, here on Your Wonkette. Spoiler alert: it's really good and you should buy at least one but probably several copies, immediately.

Sadly, I can't match the tone of Sara's self-review, which appears to have been written in some kind of amazing fugue state while she was at a book fair in soon-to-be-submerged Miami. After a swell party Tuesday night I actually spent the entirety of the first full day my novel was available for purchase in my bathrobe at home, promoting it and finding out who'd already gotten theirs online. Which is actually kind of appropriate, because a lot of the book is about life online. The main character, Kate, works for a mysterious Agency whose job is to get people excited about ... well, whatever someone pays them to get people excited about. And to that end she spends a lot of time online, because you know where people gather in insular little communities to be excited about things? Online! This is something you Wonkette readers might be a little familiar with. Remember, hating something is a specific kind of being excited about something.

Kate's trying to work the angles with two different groups of nerds. One is an online message board that's ironically obsessed with an ancient soap-opera comic strip, something I know a little bit about. The other is obsessed with subways -- specifically, the Washington Metro, as the action mostly takes place in our nation's corrupt, repugnant capital. Those Wonkette readers who toil in the trenches of our government and its ancillary industries will relate to the loving description of the odors arising from Metro carpets.

At any rate, in order to direct these oddballs' attention in the mysteriously profitable directions that she's being paid for, Kate must become an oddball -- become both kinds of oddballs, in fact. She must get out from behind her keyboard and interact with people in person, sometimes under assumed names. She has to manage a famous actor and a sarcastic German engineer. She has to figure out what she really likes, and why. And she has to go to a really terrible rave at a NoMa warehouse, for reasons that will become clear, trust me.

This book is about How We Live Now, in the sense that it tackles the various not-quite-overlapping identities we create for ourselves for different audiences online and off, and also in the sense that it has a lot of text messaging in it. Text messaging, can you imagine! Like the kids do! Mercy! It also has a joke about Defamer, a Gawker Media site which Nick Denton murdered after I finished the book but before it even went to print, so thanks a lot, Nick.

Anyway, it seems pretty obvious by now that you should buy my book. If, somehow, you're still not convinced, you can read the first chapter, which I put on Medium because that's a thing people do now, I guess, or you can listen to me read the third chapter on The Catapult, a hip NYC books podcast. There are still lots more chapters other than those, for the record. I'm not just giving this thing away. No, you will need to spend money to acquire it: you can buy it in physical form from TopatoCo ($15 for a softcover book, $25 for a hardback) or as an e-book from Gumroad ($8). Will it be worth it? As the man who wrote this book and will profit when you buy it, I'm here to tell you: yes.