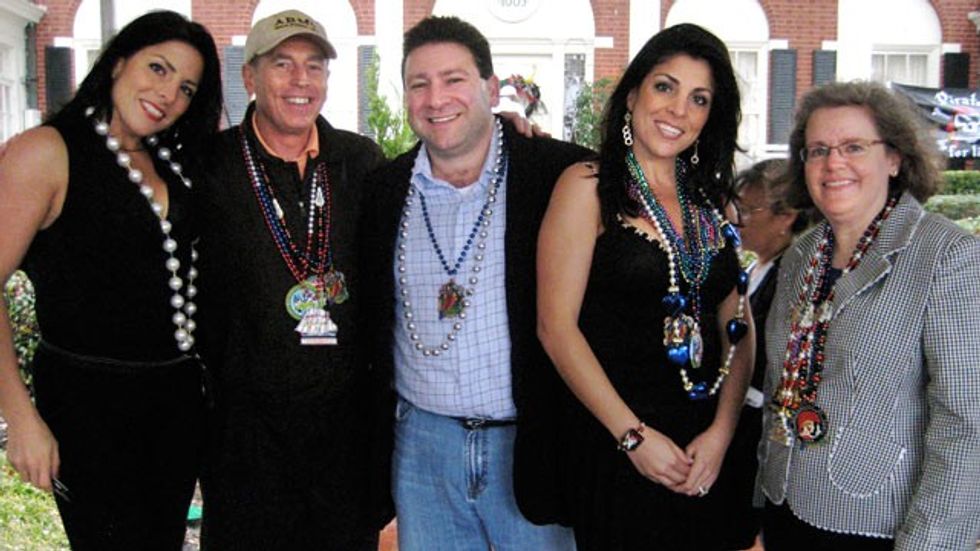 First! Let us hear some about Jill Kelley and her husband's shady cancer charity! Take it away, HuffPo!

Based out of the couple's mansion, the Doctor Kelley Cancer Foundation claimed on its tax forms that it "shall be operated exclusively to conduct cancer research and to grant wishes to terminally ill adult cancer patients." [...]

The Kelleys also listed smaller expenses that appear excessive for a charity operating from a private home, including $12,807 for office expenses and supplies, and $7,854 on utilities and telephones.

Jill Kelley's sister, Natalie Khawam, was listed as the only other officer of the charity. This past April, Khawam filed for Chapter 7 bankruptcy, listing more than $3.6 million in liabilities, including $53,000 owed to the Internal Revenue Service and $800,000 owed to her sister and brother-in-law.

Why, what an opportune segue to the twins' millions in debt despite throwing lavish parties that obviously came with personal cocaine assistants toting Stevie Nicksian butt-straws of solid gold.

Jill Kelley, whose complaint over threatening emails prompted the FBI inquiry that has ensnared two top generals, is mired in lawsuits from a string of banks totalling $4 million (£2.5 million), court filings obtained by The Daily Telegraph in Florida show.

Meanwhile Mrs Kelley's identical twin Natalie Khawam – who obtained testimonies to her good character from both Gen Petraeus and Gen John Allen during her own separate legal battle – declared herself bankrupt earlier this year with liabilities of $3.6 million, filings show.

Mrs Kelley, a mother-of-three and unpaid "social liaison" for the US military in Tampa, is said to have spared no expense at such parties to honour top brass stationed at nearby US Central Command. She was pictured at one event at her $1.2 million mansion in 2010 with Gen Petraeus, who arrived in a 28-man police motorcycle escort.

Guests at Mrs Kelley's parties were treated to lavish buffets, drank champagne and puffed on cigars while being entertained by string quartets, according to insider accounts.

Yet she and her husband Scott, a surgeon, were soon being sued for $1.9 million by Central Bank after allegedly failing to keep up with mortgage payments on a house they bought after starting their own property company. A similar $1.8 million property lawsuit from Regions Bank followed soon after.

Later in the year, Regions Bank filed another claim against the Kelleys for $453,000, before Bank of America sued Mrs Kelley for $25,000 in allegedly unpaid credit card charges. All four cases remain open. The banks' lawyers declined to comment. Mrs Kelley's attorney did not return a request for comment.

"There are obviously financial issues," said one associate of the Kelleys.

Yes, the obvious financial issues being that rich people hate paying their fucking bills! And why should they, when they create so many jobs at the catering company! Won't someone throw them a parade?

And to put a cherry on our sweet tale, we have the greatest thing in the known universe: Jill Kelley calling the cops to bitch about people on her property (as she should) and claiming "diplomatic inviolability" due to the "honorary ambassador" certificate they made for her at some dumb party, and whereupon she immediately dropped the "honorary" part.

Two 911 calls were made from the Kelleys' home on Sunday. In the first recording, a man whose name was redacted says there is someone at the door who won't leave his property. The second caller, who identifies herself as Jill, says there's someone lurking in their yard.

As the call ends, she makes an apparent reference to her role at MacDill Air Force Base, which the Associated Press has described as an "unpaid social liaison."

"You know, I don't know if by any chance, because I'm an honorary consul general, so I have inviolability, so they should not be able to cross my property. I don't know if you want to get diplomatic protection involved as well," she told the 911 dispatcher, who agreed to pass the information along to police.

Some old man, naturally, is being all crotchety and mean about this:

"It is not possible at all. Diplomatic immunity, diplomatic protection is only given to American personnel. Diplomatic personnel in foreign countries," he said.

Otero says Kelley's title was honorary, given by the Coalition Village at MacDill. He compared it to an honorary doctorate, stating that does not make an individual a physician.

"So (Kelley's honorary title) has no value, no legal protection, no legal authority," he said.

Oh Kelley Girls. What would we ever do if this story did not have your greed, your dumbshittery, your social climbing. It would be like trying to have this story without a crazed rightwing Fibbie leaking to Newsmax and sending shirtless selfies. It would be unpossible.