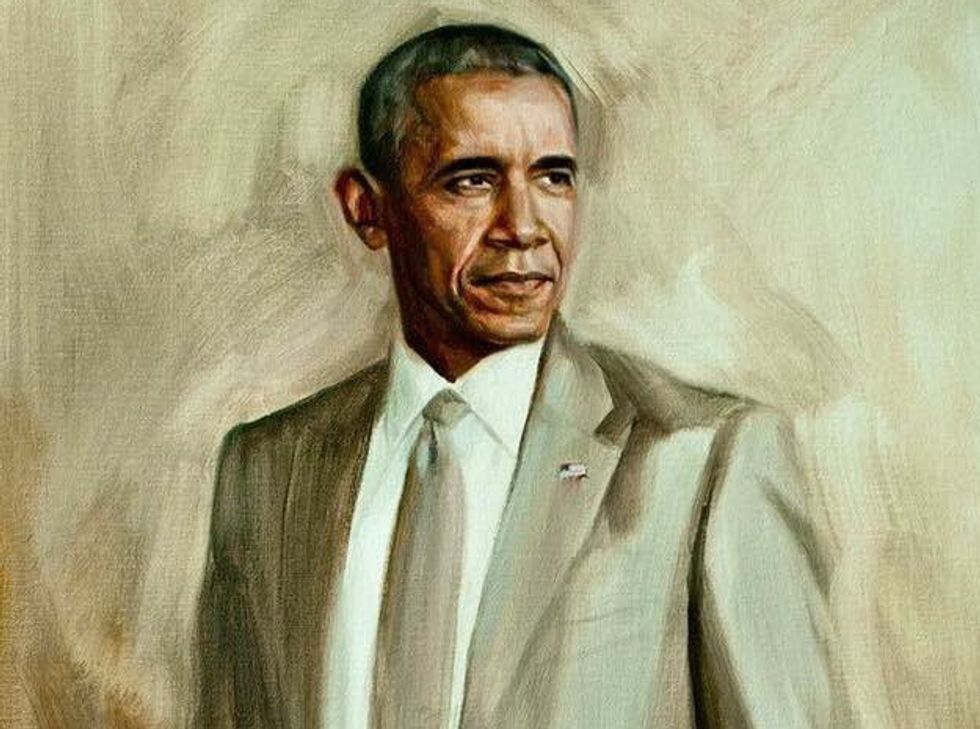 I was surprised how many wingnuts thought I agreed with them, because obviously it wasn't really his beautiful White House.

Donald Trump had some deep thoughts on the real meaning of Memorial Day yesterday:

Happy Memorial Day! Those who died for our great country would be very happy and proud at how well our country is doing today. Best economy in decades, lowest unemployment numbers for Blacks and Hispanics EVER (& women in 18years), rebuilding our Military and so much more. Nice!

You know what isn't the right way to mark Memorial Day? Saying "Happy Memorial Day!" on a day that's supposed to be about solemn remembrance. Twitter, not surprisingly, had no end of fun pointing out that the "president" of the USA had just honored the war dead by praising what a great, cherry-picked job he'd done of inheriting Barack Obama's economy. Friend of Wonkette Charlie Pierce was particularly good at it:

Sunken Road -- Antietam
Nothing to do with a president's preening. pic.twitter.com/0df1n9AVRu

Sure, I was a ball turret gunner on a B17 and 22 of our planes flamed on that mission, including mine, but it was all worth it so 70 years later, an overripe gossoon could preen himself on his predecessor's work.

We thought the part where they washed him out of the turret with a hose could have used some trenchant thoughts about tariffs, though. On the plus side, Trump managed to get through the day without grinning, mouthing the national anthem, and dancing around like he had to pee.

All of that put Yr Wonkette in mind of some of the times -- like all of them -- when Barack Obama was accused of somehow dishonoring Memorial Day by doing far more offensive stuff, like talking about the sacrifice and honor of the sacred war dead, but doing so in the wrong location. Let's take a look at a few of the many times Barack Obama told America he hated the troops!

In 2009, Obama laid a wreath at the tomb of the Unknowns at Arlington National Cemetery, and also honored black soldiers who fought for the Union in the Civil War. We're astonished we couldn't find -- in what was admittedly a cursory search -- any rightwing sources freaked out by that in 2009, although later that year Rush Limbaugh did have a hissy at Obama for dishonoring the sacred dead of 9/11 by calling it a day of service, because helping others is socialist, and also some bullshit.

By 2010, though, the rightwing narrative had taken shape: No matter what Barack Obama did near Memorial Day (or any holiday), it was an unspeakable dishonor to The Troops, a stain on history, and the likely end of America. You see, in 2010, Obama took five days off from presidenting to visit Chicago, where he probably seized guns from patriots and distributed them to gang-bangers. That meant he wasn't at Arlington to lay a wreath, and although he did give a speech at Abraham Lincoln National Cemetery -- no shortage of War Dead there to honor -- it was still outrageous and insulting, because no white president ever skipped laying a wreath at Arlington except Ronald Reagan and GW Bush, when it wasn't outrageous somehow. Ever since then, Snopes has had to debunk the claim that Obama never, ever laid a wreath at the Tomb of the Unknowns, because he just hated America that much. Every year thereafter, he went to Arlington, but that mere detail never seemed to make a difference, because after all, he'd also banned people from saying Merry Christmas.

In 2012, Obama managed to disgrace the sainted war dead by honoring them at the Vietnam Veterans Memorial, where he gave a speech. But you see, because he was taking up space at the memorial, that meant there was security, and barricades, so for a few hours before, during, and after the speech, REAL veterans couldn't walk right up to the wall because Obama was honoring the dead, which was awfully selfish of him, according to the wingnut internet:

Many of those who were denied entrance to “The Wall” bear the living scars of their service in that horrific war. They gave the very best they had to keep Southeast Asia from becoming the very thing Obama is doing his best to turn America into–a Marxist-Leninist State.

With his long record of unambiguous hatred for our military, this is the person who closed the Vietnam Memorial from 7:30 AM until 2:00 PM, denying access to veterans and those who truly care about the names of those inscribed on that Memorial Wall. In the opinion of this essayist, this is one of the most egregious, selfish, self-indulgent acts yet committed by this human being. And he closed it so he could give a 15-minute speech which was nothing more than self-congratulatory agitprop. [All various forms of emphasis in original -- Dok Z]

Here is Barack Obama's self-congratulatory agitprop in favor of a Marxist Leninist warrior-hating state, from that very 2012 speech -- from Fox News, no less:

We come to this wall -- to this sacred place -- to remember. We can step towards its granite wall and reach out, touch a name. Today is Memorial Day, when we recall all those who gave everything in the darkness of war so we could stand here in the glory of spring. And today begins the 50th commemoration of our war in Vietnam. We honor each of those names etched in stone -- 58,282 American patriots. We salute all who served with them. And we stand with the families who love them still.

For 2013, wingnuts were still mad about Barack Obama dishonoring the Marines by making a Marine guard hold an umbrella over the head of a FOREIGN PERSON and also a BLACK GUY. In 2016, Obama went yet again to Arlington, but before that, he made a complete MOCKERY of America by going to Hiroshima three days beforehand, where according to Dead Breitbart's Internet Home for Perpetual Outrage he profaned Memorial Day Weekend by praying for peace. And peace always means surrender, so Obama effectively dropped atomic bombs on Pearl Harbor, the cur.

Even after Barack Obama left office, he still managed to dishonor Memorial Day. Last year, wingnut lawyer Larry "That Judge Was A Jew!" Klayman insisted at WND that an Obama-appointed judge had spat in the face of all fallen heroes by ruling against him in yet another bogus Benghazi lawsuit the week before Memorial Day 2017, and oh what a sad pass America has come to.

And to round out the horror show, just look at this utterly offensive tweet from the former president yesterday:

We can never truly repay the debt we owe our fallen heroes. But we can remember them, honor their sacrifice, and affirm in our own lives those enduring ideals of justice, equality, and opportunity for which generations of Americans have given that last full measure of devotion. pic.twitter.com/pRxwmaMClL

Why did he have to use a picture of himself honoring the veterans instead of praising Donald Trump's beautiful economy, huh? Why does he hate America? Why was Obama afraid to even say "Happy Memorial Day" like a REAL patriot would?

Don’t take for granted that the institutions you love will always be there, like democracy, and Wonkette. Click to save at least one of them! (Also, IT'S A REPUBLIC!)