A Step By Step Guide To Putting FRENCH ONION ROAST BEEF SLIDERS Inside Your Face! 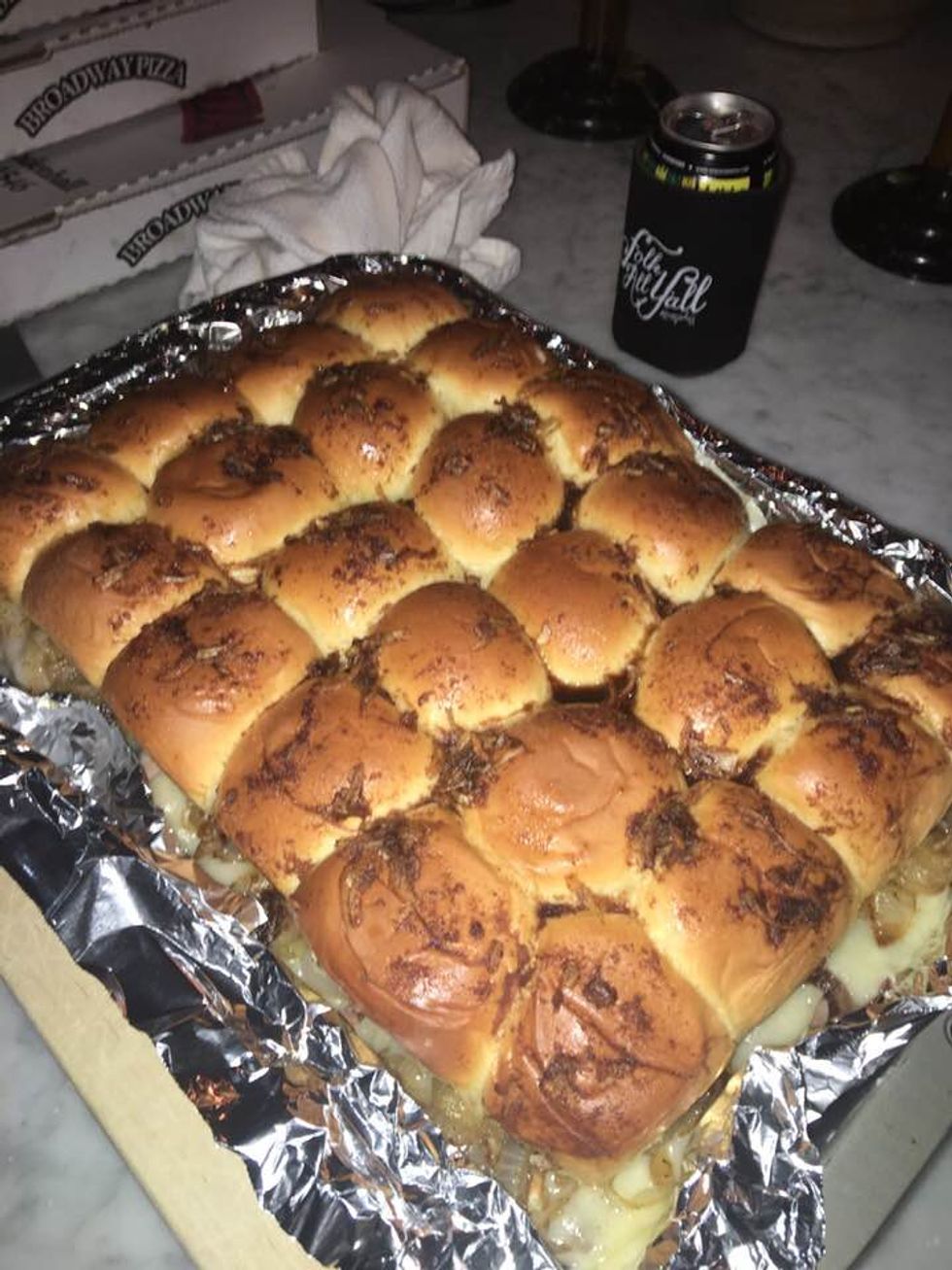 This is the best picture we got because THE POWER WENT OUT.

Oh hey, what is this, Evan is writing recipes now? Yes, when he feels like it, which is not very often. But maybe he will do this more!

OK so we decided, on New Year's Eve, after seeing one million of those Buzzfeed Tasty videos and seeing variations on really interesting sliders on one million recipe blogs, that we wanted to make French Onion Roast Beef Sliders for our NYE party. They're for a crowd! They'll disappear before they're even out of the oven! Your friends will die because they climbed in the oven to eat the sliders! Your friends are dead now, because they're stupid!

So we looked at a bunch of recipes -- like this one and this one and this one and this one -- and tried to take the best bits from each one and give it a go. For instance, one of them used ground beef instead of real 'spensive and good deli roast beef, and that just seemed Not Right. Several were crock pot recipes, and while we are GAY MARRIED TO CROCK POTS, we were cooking on somebody else's marble countertops that night and didn't feel like lugging that shit over there and having to deal with it when we woke up from our drunk-induced slumber the next afternoon.

Funny story: When these were about five minutes away from coming out of the oven, the power suddenly went out, because some dumb idiot was obviously playing Pokemon Go! while driving and oopsied into a power line, WE ARE GUESSING. We sure hope that dumb idiot was OK, because the power was out for over two hours and that shit was annoying. Point is, we have included alternate instructions for what to do if something similar happens to you.

Here is what you will need:

1 1/2 pounds of roast beef from the deli section of the grocery store. (Or you could do pastrami, that would be good!)

1 pound of gruyere cheese, again from the deli, unless you want to slice it yourself because you are insane. (OR: Swiss!)

A stick of butter or two. More if you use butter whilst caramelizing onions.

A 24 pack of King's Hawaiian slider rolls. (If you for some reason hate those, we are real damn sorry for whatever happened in your childhood to afflict you with that incorrect opinion, but you can substitute other slider rolls of your choosing.)

Salt 'n' pepper 'n' olive oil, AKA "normal shit you should have in your kitchen."

Your favorite ingredients to make a spicy mayonnaise aioli or au jus for dippin', if you're in the mood. (OPTIONAL)

Here is what you will do with that shit:

Slice your onion in half lengthwise, then thinly slice the halves up crosswise.

In your iron skillet -- you do have one, yes? -- pour in some olive oil (and/or butter!) and heat it up on medium-low. Once it's piping hot, throw your onions in there, give them a good pinch of salt and a shit ton of pepper, and then caramelize them. Open a beer. Drink it. Smoke a cigarette. Finish your beer. Open another beer. Go outside and visit the fire pit. Yell at the Super Bowl game on the TV, if you happen to make these that day. Stir occasionally for 30 or 45 minutes, even though people seem to have lots of OPINIONS about how to caramelize onions these days, and allegedly some of these newfangled caramelizin' processes only take 10 minutes. We personally believe that is fake news. Just caramelize them how you'd like, but we are sticking with the old fashioned way.

While onions are caramelizing, melt a stick (or a stick and a half) of butter on the stove (or fine, in the microwave) and mix it up with the soup mix. Add a little salt and pepper to that too.

Line a 13" x 9" baking pan or tin with foil ALL THE WAY AROUND. Even let it stick out over the sides. You will see why when you get it out of the oven later.

Cut your King's Hawaiian rolls in half to separate the bottoms from the tops. USE A GOOD LONG BREAD SLICER AND BE PATIENT, otherwise you will fuck it all up.

Put the slider bottoms in the baking dish, then evenly cover them with all the roast beef slices. You did remember to have the deli slice it for you, correct? Next up, do the same with the cheese. Finally, layer your delicious caramelized onions over the top when they are done.

Now, put the bun tops on top to complete your slider construction. Brush or spoon your butter/soup mix all over the tops, doing your best to achieve even coverage. (If it seems like you don't have enough, overcompensate by drizzling with olive oil. Don't worry about having "too much," as that is scientifically impossible.)

Cover all that shit with foil and let it sit for 10 minutes. THEN put it in the oven, still covered, for 10 minutes. Pull the foil off and bake for 5 more minutes. (PRO TIP: If the power goes off right in the middle of the last 5 minutes because Carol wrapped her Tercel around a tree because she was trying to catch an elusive Snorlax while driving, go ahead and leave it in the oven a couple extra minutes.)

AND NOW YOU ARE FINISHED!

Serve with a nice au jus or maybe a fancy aioli mayonnaise (preferably made with Good Mayonnaise like Duke's or something) if you'd like. It's not necessary, but it's good!

FINAL PRO TIP: develop a strategy for making sure you can get at least three of the sliders for yourself, because people are going to murder them with their mouths, very quickly. You may need to wear knee pads and a helmet.

Feel free to share your favorite Super Bowl or party recipes in the comments of this, YOUR OPEN THREAD! If we like 'em, we might turn them into a big recipe post, curated by you!