A Unified Theory Of WHAT THE FUCK Michael Cohen And Sean Hannity! It Might Even Be Right! 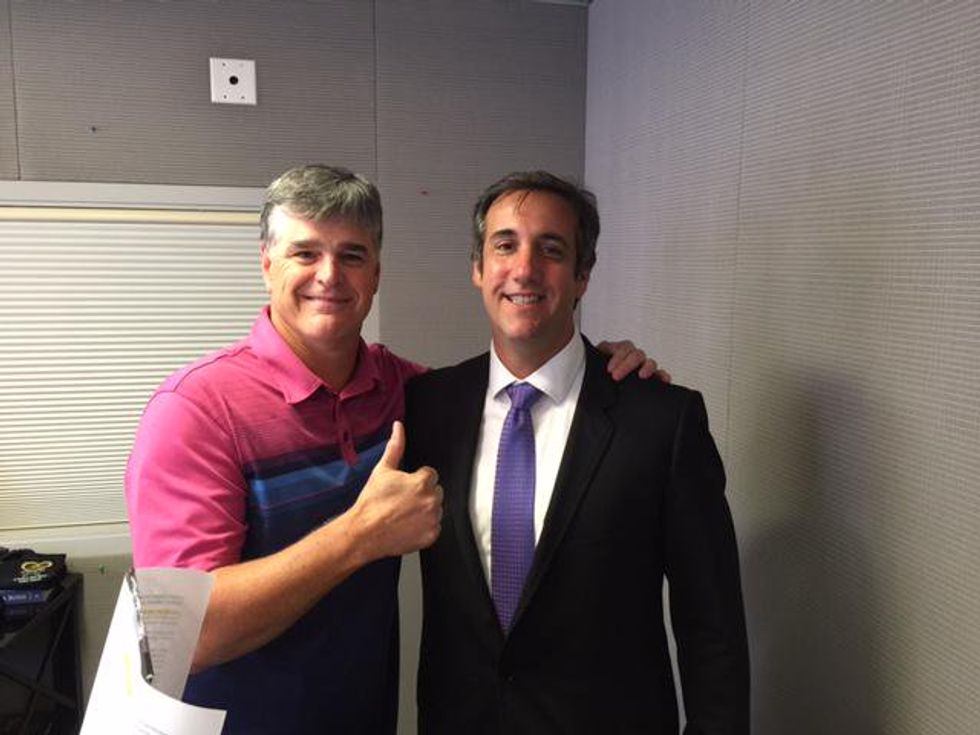 SEAN FUCKING HANNITY? Are you kidding us with this shit? Michael Cohen's client is Sean Hannity? As our beloved Editrix blabbed to all of Twitter, this news knocked us sideways. But we have sufficiently recovered, after a nice liedown on the chatcave floor and a cold compress, to lawsplain it to you and offer up our best guess as to what the hell is going on here.

But first, a big shout out to attorney Robert Balin, of Davis Wright Tremaine*, who appeared in court yesterday on behalf of several news organizations. Judge Kimba Wood had agreed to allow Cohen's lawyers to present the name of Client #3 under seal -- that is off the record -- when Balin successfully argued that the public had a right to know. Lawyers, FTW!

*Disclosure here so as not to act like a common Sean Hannity: Davis Wright Tremaine is the law firm where the editrix's esteemed uncle, a nice man and excellent 1A attorney, is partner.

What was this hearing about, again?

Last Monday, the FBI raided Cohen's home, office, and hotel room. Yesterday, attorneys for Cohen, Trump and the government all showed up in court to argue over who gets to sort the evidence collected to weed out documents that are inadmissible due to attorney-client privilege. The judge ruled that the FBI taint team can start sorting, and she will determine later whether a special master is required to arbitrate privilege disputes because of the high-profile nature of the case.

But before that happened, the judge ordered Michael Cohen to produce a list of his clients to substantiate his claim that he IS TOO a real lawyer with clients to protect. Turns out, Cohen only had three clients: Donald Trump, Elliott Broidy, and Mystery Client #3. After kicking up a hell of a fuss, Cohen's lawyers finally acceded to the judge's order and acknowledged that the Cohen's secret penpal was none other than noted Fox Fuckwit Sean Hannity.

Is this just Cohen being a moron? Or is this an actual strategy?

Let's accept for a moment Cohen's rationale that Hannity asked for anonymity to avoid being associated with the Trump-Cohen-Daniels-McDougal-Russia Circus. Fair enough. But when push came to shove, Cohen's main priority was making sure that the substance of his communications with Hannity remained shielded by attorney-client privilege. That is, Cohen knows what evidence the government seized, and he wants to make damn sure it doesn't get passed along to the prosecutors. WHY?

We know it sounds crazy, but let's say Hannity is telling the truth, more or less!

Sean Hannity babbled a lot of stupid nonsense yesterday, but he seems to have consistently maintained two things.

Michael Cohen has never represented me in any matter. I never retained him, received an invoice, or paid legal fees. I have occasionally had brief discussions with him about legal questions about which I wanted his input and perspective.

Hannity on Cohen: "I never retained him, received an invoice, or paid legal fees."

Also Hannity on Cohen: "Might have handed him $10. I definitely want attorney-client privilege."

I assumed those conversations were confidential, but to be absolutely clear they never involved any matter between me and a third-party.

which dealt almost exclusively about real estate, not be made a part of this proceeding.

Yes, he could be lying his ass off. Maybe this really does involve Russian backchannels or advertiser boycotts. But as we've seen with Don Jr. and his bouncing Russian baby bullshit, there's usually a kernel of truth in every lie. Just this once, let's take Hannity at his word. He and Cohen only talked about real estate a couple times. But what kind of real estate discussions would be so damaging that Cohen would go to the mat to keep them off the record?

Oh, come on! Use your imagination! Here, we'll go first.

Sean: I've been seeing Miguel for about five years, and I want to put the Miami condo in his name. How can I do it without having to report the gift tax on my returns?

Michael: Well, what Donald does is to transfer the interest into an LLC in the Caymans ...

Sean: I've been dating this girl Tatiana, and she wants to sponsor her parents to come over from Ukraine. I want to buy a house in Maui and bring over her parents as caretakers.

Michael: Well, first you have to convert the cash to Bitcoin ...

Sean: I have found my true soulmate. And even though Esmerelda is a goat, I know we'll be very happy together. How can I purchase a conservation easement upstate where we can frolic together in the long tall grass?

Michael: I also love a goat. His name is Stanley.

Look, we have no idea what these two dipshits talked about. We're only saying that there are plenty of "just real estate" scenarios that would be very unpleasant to explain to a room full of prosecutors.

Then why was Hannity falling all over himself to say Cohen wasn't his lawyer?

Because he's an idiot? Because he panicked? Or maybe because Cohen knows what evidence the government is about to discover when they start sorting, and Hannity doesn't.

Remember, Cohen has a nasty habit of secretly taping his conversations. Cohen knows if there's an incriminating recording on his seized laptop. Or a memo titled "Conservation Easement for Hannity's Goat Girlfriend Esmerelda." And Cohen is a lawyer(-ish). It's entirely possible that he advised Hannity to do something illegal, like use Bitcoin to avoid paying gift tax, and Hannity doesn't even understand that he was being advised to break the law.

The point is, Hannity is going to have a difficult time asserting attorney-client privilege now that he hopped up and down hollering that, (1) he never actually retained Cohen, and (2) he handed over a token amount of cash as a sham invocation of privilege.

But what if Hannity is LYING?

If he's lying, then it's probably another Playmate payoff. And if it was a Michael Cohen-Keith Davidson-David Pecker special, they could have routed the woman through the National Enquirer to kill the story without significant expenditure of cash. Cohen could have talked Hannity through it, Hannity could have handed him a tenner and said HOCUS POCUS PRIVILEGE, and there would be "no third party contract." It's plausible.

What's not plausible, however, is that Michael Cohen was somehow masterminding some piece of Russia fuckery. This is a lawyer who confessed to multiple campaign finance violations on national television. He's more likely to get lost in an elevator than to be a conduit between Hannity and Assange. No, just no!

You got a better theory?

GREAT! Tell us all about it in the comments!

Please click here to fund our lawsplainers and lawspeculations! Do it for Esmerelda!