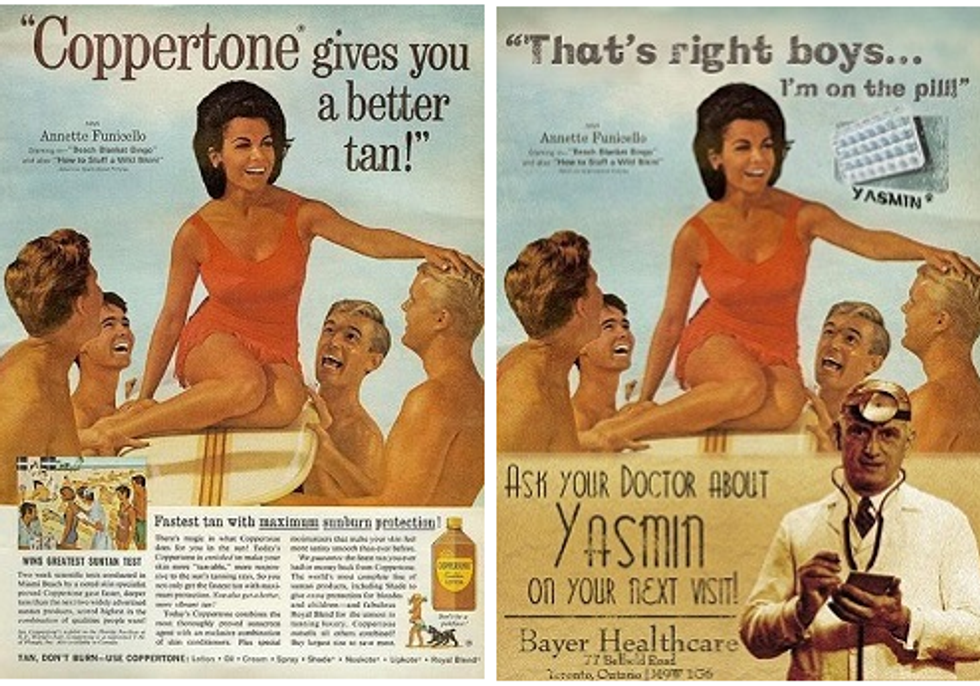 And speaking of sluts, three weeks ago pastor Steven Anderson strolled into his Arizona church with proof that "the birth control movement" was promoting whoredom. So the pastor waves around his flimsy print-out, sternly warning the congregation that Annette Funicello is a whore whoring it up with birth control, contributing to whoredom, which "is what birth control does to our society."

Unfortunately, it turned out to be an ad for suntan lotion.

Of course, Steve's not the most cosmopolitan guy. According to Wikipedia, his church is an office space in a strip mall. Google Maps shows it next to an Arby's and across from "Cash 1 Loans."

He's been married since he was 18 -- just six years after skipping a sex ed class in middle school. He complains in his sermon that he still heard "it all" anyways -- from all of the other 12 year olds.

Now he's a 31-year-old man who still calls it a "You-know-what ed class" in front of your congregation. (Though he has no trouble with the words "whore" and "harlot"...) But again, here's what Annette actually said in that ad: "Coppertone gives you a better tan." And 50 years later, Pastor Steve is parading around the aisle of his strip mall church, singing "I'm a whore! I'm on the pill! Come fornicate with me!"

The weirdest part is when Annette Funicello appeared in that Coppertone ad, she was already married... and pregnant! Annette lived with her parents until the day of her wedding, then immediately got pregnant on her honeymoon. And yes, even when she filmed "How to Stuff a Wild Bikini" -- she was already married and pregnant! She was one of the most wholesome actresses in the history of cinema, and in most of her movies refused to wear anything but a modest one-piece bathing suit.

She was a good woman, who made teddy bears, and then donated the profits to medical researchers. She was beloved by millions. And yet thanks to Pastor Steve, here's what we saw on Google News on the one-year anniversary of her death.

("Today marks exactly one year since your passing....")

AZ pastor: Childless women on birth control have destroyed the US... - Raw Story

("Anderson noted that Annette Funicello, a star of the Mickey Mouse Club in the 1950s, had promoted birth control for a 1960s-era advertisement...")

Even Wonket got conned into reprinting the good reverend's mistake. But in the end, all Steve did was torment his congregation with his own demented interepretation of an innocuous suntan lotion ad from the 1960s. Although somewhere out there is a 13-year-old from Fark who's thrilled beyond pieces that a fundamentalist minister is reciting his fake photoshopped dialogue to an entire congregation. Even if it is just at a strip mall in Tempe, Arizona.