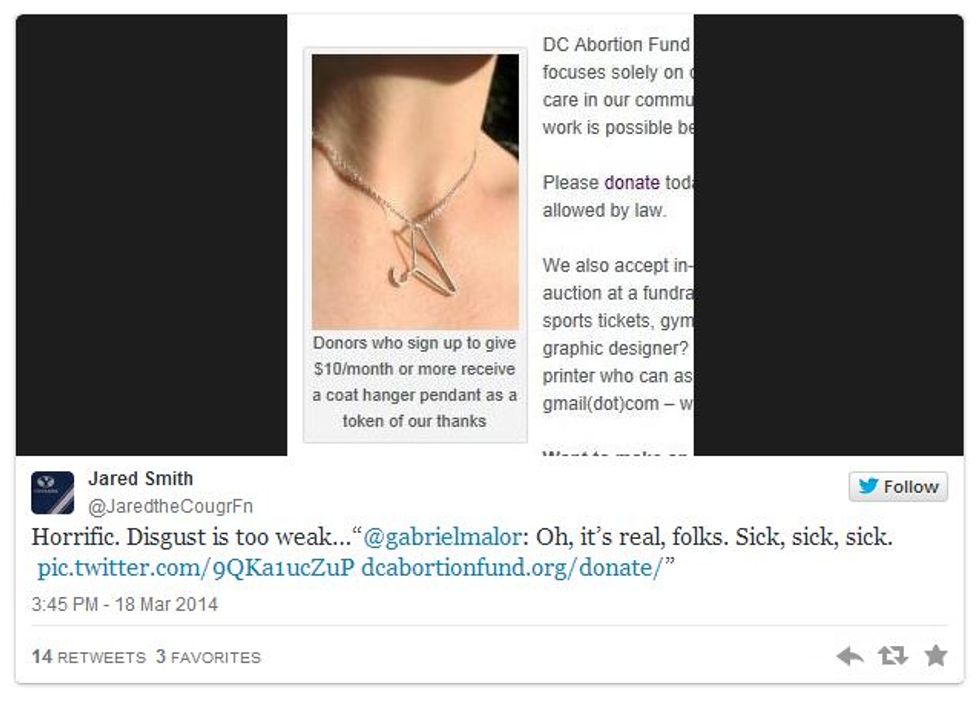 If you give the DC Abortion Fund $10 a month, you'll get a tiny coat hanger, ideal for wearing as a pendant or neatly storing your pet hamster's tuxedo, which would also make a pretty cool pendant. Of course, for DCAF's tactic to work, the anti-choice crowd had to cooperate by totally failing to realize that the coat hanger is a joke at their expense -- that if they succeed in banning abortion, the old horror days of coat hangers and tumbles down stairs and thousands of dead women will inevitably return. So did they cooperate? Did they fail to realize that they are the real coat hangers? Oh Twitchy, did they ever!

"Sick, sick, sick," moaned some person on Twitter, effectively mocking themselves. "Monsters," spat another, whose fealty to a book of old desert myths motivates her to condemn the medical and life decisions of people she's never met. And then there's this guy, who doesn't like it either:

Say, you know how a popular anti-choice tactic is to display huge images of bloody fetuses? And you know how a lot of GOP politicians want to force women seeking abortions to get invasive, medically unnecessary ultrasounds, to shame them into having an unwanted child, or at least make them feel extra horrible if they decide to abort after all? Apparently that's all fine! But Fortuna help you if you give away a tiny coat hanger.

So that's what we learned today, how about you?