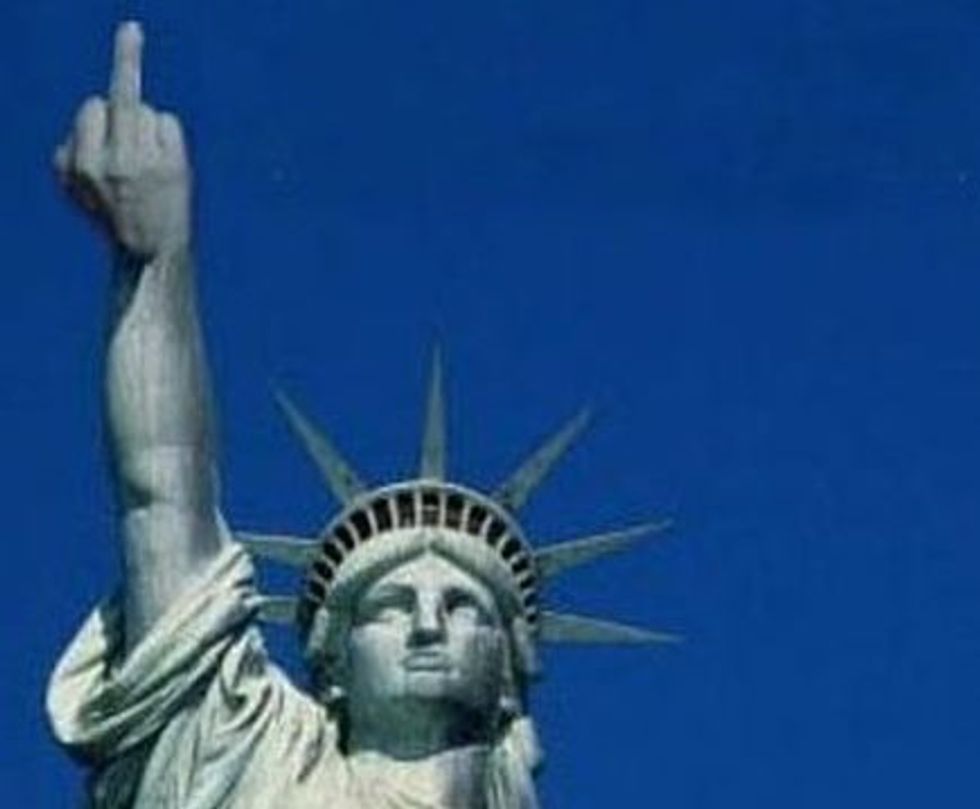 In its latest move to advance the New Cruelty, the Trump administration announced yesterday it would end a program that had allowed some 200,000 people from El Salvador to live in the US without fear of deportation since 2001, because it's suddenly vitally important to turn as many people as possible from legal to illegal immigrants. The Temporary Protected Status (TPS) was put in place in 2001, following two earthquakes in El Salvador, and other administrations had routinely extended it. But hey, say the Trumpers, the earthquake damage is all cleaned up so it's time for you loafers who've gotten jobs, put down roots, and had American-citizen children to GTFO. Salvadorans' provisional residency permits will no longer be renewed, but they'll have until September 9, 2019, to either leave the country or find some other legal way to stay. After that, it's a visit from the Goon Squad.

Homeland Security Secretary Kirstjen Nielsen insisted the move was completely unrelated to any larger goal of purging America of as many foreigns as possible, heavens, where would you get such an idea? In a statement, DHS announced that

the Secretary determined that the original conditions caused by the 2001 earthquakes no longer exist. Thus, under the applicable statute, the current TPS designation must be terminated.

After all, the statement noted, the US has deported more than 39,000 Salvadorans in the last two years, and none of them got conked on the head by earthquake debris, so there you go -- the "temporary inability of El Salvador to adequately return their nationals after the earthquake has been addressed."

Sure, El Salvador may be in the middle of a wave of gang violence, and has one of the highest murder rates in the world, but that didn't enter into the decision to terminate TPS -- that was about the earthquakes, and only the earthquakes, so there's no reason to consider the possibility that people will be murdered. Why would it? The goal here is to read these things as narrowly as possible, and to get people deported as quickly as possible, even if they've been here legally. Come September 2019, that excuse will be gone and anyone who hasn't left will automatically become a dangerous criminal alien, and we certainly can't allow those to stay. Not even if they have a cover sheet on their TPS report.

The decision also didn't take into account the potential economic impact of uprooting all those people, according to administration officials, even though mayors of cities with large Salvadoran populations, like Houston and Los Angeles, had urged Nielsen to consider the jobs and businesses that will be impacted -- about a third of Salvadoran TPS holders are actually homeowners.

The economic and social disruption of hundreds of thousands of people coming back to El Salvador was also not considered, outside the narrow standard of whether the 2001 earthquake was still affecting the country's ability to accept returnees. NPR reports that on average, Salvadorans working here send $4,000 a year each to relatives in El Salvador, for a total of $600 million annually. That's more than the total of US economic aid to the country. But just think, now El Salvador will be flooded with people to create jobs for! Maybe its government could cut taxes for the rich -- that ought to do the trick.

In addition to the 200,000 Salvadoran adults allowed to stay in the US by TPS, the decision would also affect the roughly 190,000 US-born children of those immigrants, whose US citizenship will be of no help in keeping their parents here because we hate "anchor babies" too. Parents will have to decide whether to take the kids with them to El Salvador, break up their families, or take a chance on staying and getting deported. The party of Family Values and Individual Responsibility will no doubt smile and explain those Salvadorans knew their status was temporary, so it's their problem if they went and had children, now isn't it. A DHS official who spoke on the record but was not allowed to be quoted by name told the Washington Post, "We are not going to get involved in an individual family’s decision," which is awfully nice and non-intrusive of them.

We're living in a dystopian sci-fi novel now. Watch out for C.H.U.D.s.

In addition to yesterday's decision to end TPS for Salvadorans, the administration has previously ended TPS for 60,000 Haitians who came here after the 2010 earthquake and for 2,500 Nicaraguans allowed to stay after a hurricane in 1998. Another 57,000 Hondurans were granted a six-month extension of TPS earlier this year by acting DHS Secretary Elaine Duke, a move that angered Trump's anti-immigration crowd, because the goal here is to shovel as many brown people out of America as possible. Anticipation of losing protected status has been one of the factors driving thousands of migrants to flee the US for Canada, because now America is a place that refugees are running from, god help us.

The DREAM Act of a few years back, it's worth noting, would have provided a pathway to citizenship not only for the approximately 700,000 undocumented young people whose parents brought them to the US when they were children, but also would allow recipients of TPS permits to remain in the country and apply for citizenship, which seems reasonable enough since they are already here legally. Since most of the TPS terminations won't go into effect immediately, that's a hell of an incentive for people who aren't bigots to elect a Democratic House and Senate this year, huh?