ACLU Gonna Get Lawyers For All The Little Immigrant Babies. Watch Out, Donald Trump! 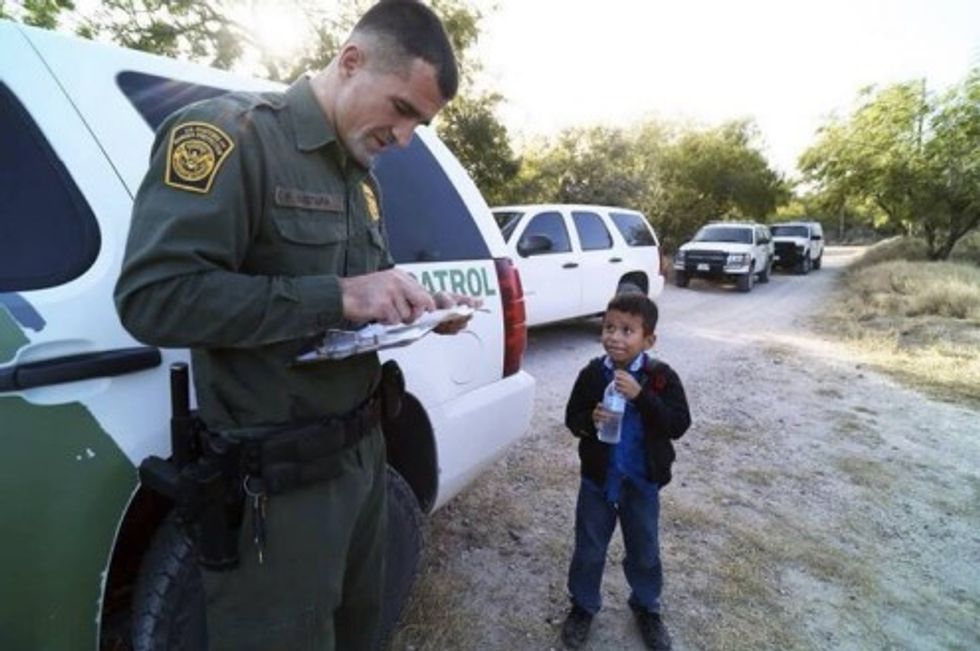 This picture of littleAlejandro and the Border Patrol guy makes us tear up. Every. Goddamned. Time.

A genuine good-news development in the long sad story of all those Central American kids who crossed the border to escape the murder and violence in their home countries way back in 2014, before we forgot about them while panicking about Ebola. Turns out the immigration courts are still sorting through their cases, and -- at long last -- the ACLU has convinced a federal judge to grant class-action status to a lawsuit demanding that the federal government provide attorneys to children. You know, that whole "due process" thing that America is allegedly really big on, except when it comes to the "justice" system's interactions with the least powerful. Kind of difficult to think of anyone in a courtroom setting who'd be less powerful than a scared kid who doesn't understand the language, let alone the judicial procedure that's about to decide whether he or she will be sent back to a murder slum in Honduras. (Dear wingnuts: If you say "an unborn baby whose mommy wants to murder it" fits that description, we will abort your commenting privileges and mock you next Sunday.)

So, here's the nitty, straight from the ACLU memo:

"This ruling means that thousands of children will now have a fighting chance at getting a fair day in immigration court,” said Ahilan Arulanantham of the ACLU’s Immigrants’ Rights Project and the ACLU Foundation of Southern California. “The Obama administration should stop defending its draconian practice of conducting deportation hearings against unrepresented children.”

The class covers all children under 18 who are in immigration proceedings in the Ninth Circuit on or after June 24, 2016; lack counsel; are unable to afford legal representation; and are potentially eligible for asylum or are potentially able to make colorable claims to U.S. citizenship.

Matt Adams, legal director of the Northwest Immigrant Rights Project, said the class action should stop the government from further delaying children's cases, and force it to

defend a system that pits unrepresented children against trained federal prosecutors in an adversarial court hearing that literally may carry life and death consequences for the children involved.

Yes, you may in fact be shocked that these kids weren't automatically given legal representation from the start -- just as we were in a Democratic debate when Hillary Clinton called for counsel for the children. Apparently, immigration courts aren't the same as criminal courts that way. No, not even for little kids. Maybe it's all an elaborate long-term counter-terrorism strategy to have less freedom for the terrorists to hate us for. Can't imagine it'll do a lot to improve our image with the kids we've been fucking over, though.

Melissa Crow, the legal director of the American Immigration Council, called the decision in U.S. District Court in Seattle "great news for thousands of children who can now join our lawsuit against a government forcing them to go to immigration court alone,” adding, “Under no circumstances should children be forced to represent themselves against trained prosecutors seeking their deportation.”

You'd think that wouldn't actually require a lawsuit, maybe. Then again, you might also think Immigration and Customs Enforcement (ICE) and Customs and Border Protection (CBP) would never stoop to clearly insane excuses to deport children like filling in interview paperwork claiming that a three-year-old boy told them, when asked why he left his home country, "To look for work." A lot of three-year-olds have really bad poker faces; it's easy to take their money. Oh, yes, and also their rights to request asylum.

“Years of experience representing children in immigration court has taught us a simple fact: Children, no matter their circumstances, cannot have a fair hearing without a lawyer,” said Kristen Jackson, senior staff attorney at Public Counsel. “The court’s order recognizes the challenges that immigrant children share and it puts us closer to a day when no child will have to face an immigration judge alone.”

House GOP Has Final Solution For Border Children: Keep Them All In Baby Jail

These are some brave little kids. Like Alejandro, the little boy in that 2014 New York Times pic up top. He showed up at the border with nothing but his birth certificate, which he carefully took out of his pocket, unfolded, and handed to the Border Patrol man, who had a bottle of water for him. But even if kids are brave enough to travel thousands of miles on top of a train and hope that the nice immigration people will help them find their relatives in the USA, they shouldn't have to be so brave that they're expected to be their own lawyers. Alejandro is 10 now, and we have no idea what happened to him after his photo was in America's Paper of Record. We hope he's OK.

We'd love to tell you that this class action decision means that all the migrant kids actually will get lawyers. Nope, this order only means the results of the lawsuit challenging the government's failure to provide lawyers will apply to all the thousands of unrepresented children. Now what we need is for the ACLU and other groups working to help migrant kids to actually win that lawsuit. Then maybe we could stop grinding our teeth quite so much at the phrase "with liberty and justice for all." (Oh, that's not going to happen either. We read that Mother Jones piece on private prisons, after all.) It would be awfully nice to not have a nation that leaves us quite so ashamed.