ACLU: No Bringing Guns To A Free Speech Fight 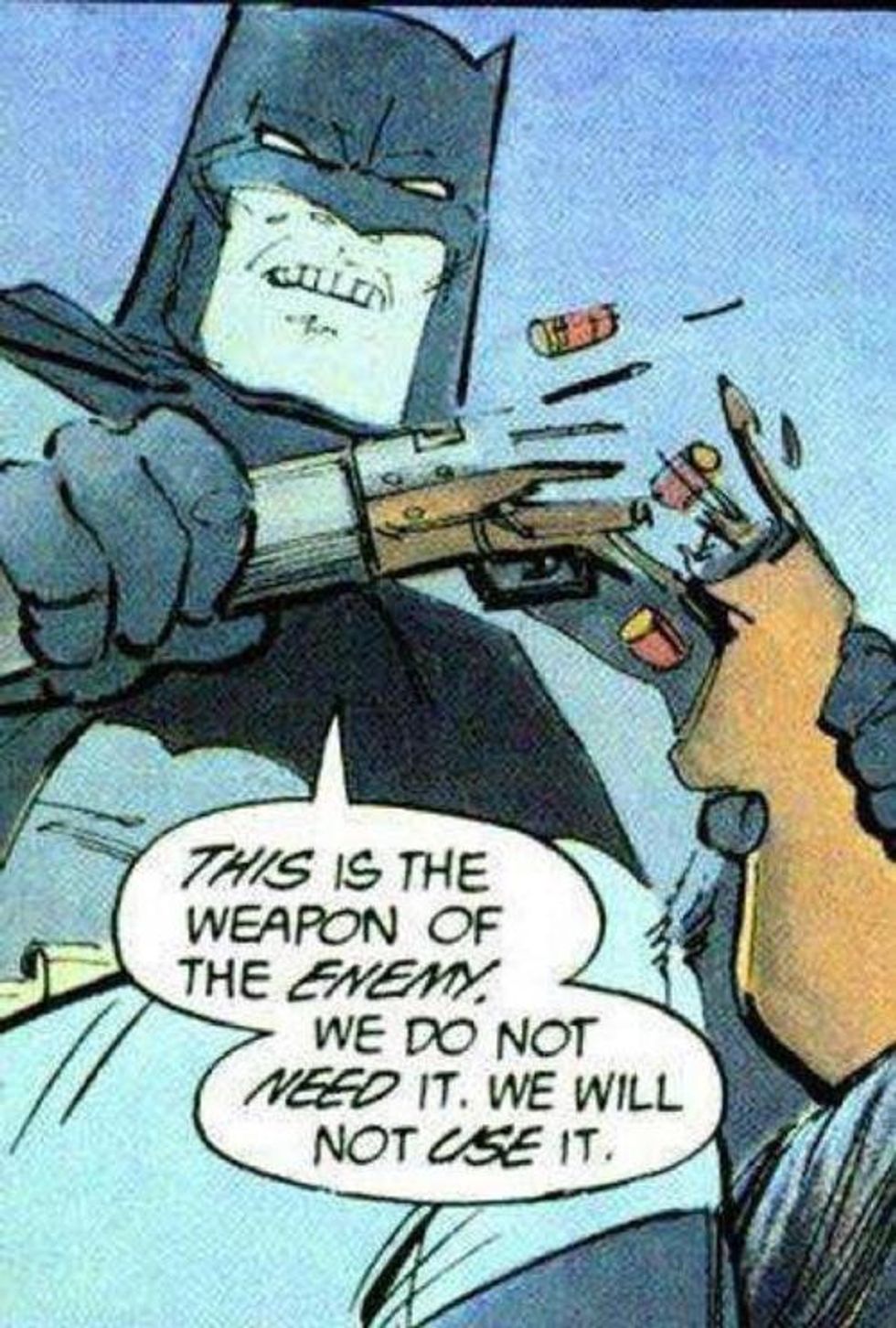 The Dark Knight has a lot of problems with you people

The American Civil Liberties Union has decided it will no longer defend the right of extremist groups to parade around with guns, because while the ACLU is all about free speech, even for nasty horrible ugly speech, the ACLU sees no reason to defend people walking around ready to shoot people with anything more lethal than a dirty look. The ACLU's Virginia chapter had helped the organizers of Saturday's "Unite the Right" rally in Charlottesville, Virginia, to get a permit for their march, and also fended off a city attempt to move the event a mile away, arguing in court that the city was motivated by opposition to the rally's message, not primarily a concern for public safety.

The ACLU is of course famous (or infamous) for defending the rights of free expression for those with hateful or extreme views, like the 1978 case in which the ACLU sued for the right of a neo-Nazi group to march in Skokie, Illinois, where a large number of residents were Holocaust survivors and their relatives. The organization has long held that the First Amendment would by weakened by any restrictions on free speech based on the content of that speech. It hasn't always made them popular with their usually liberal supporters; about 30,000 people dropped their memberships after the Skokie case. During WWII, the ACLU defended the speech rights of pro-fascist groups, and during the '50s, it defended communists.

“The events of Charlottesville require any judge, any police chief and any legal group to look at the facts of any white-supremacy protests with a much finer comb,” said Mr. Romero [...]

“If a protest group insists, ‘No, we want to be able to carry loaded firearms,’ well, we don’t have to represent them. They can find someone else,” Mr. Romero said, adding that the decision was in keeping with a 2015 policy adopted by the ACLU’s national board in support of “reasonable” firearm regulation.

Romero said the ACLU wouldn't automatically refuse to deal with any particular group, but would continue to assess requests based on the free speech issues at stake, saying "It’s neither a blanket no or a blanket yes."

Officials from California ACLU branches elaborated in an online statement,

If white supremacists march into our towns armed to the teeth and with the intent to harm people, they are not engaging in activity protected by the United States Constitution[.]

Romero argued that a display of firearms at a protest march is likely to intimidate those who disagree, thus suppressing open expression of ideas. If Nazis want to march, they can march, but they'll get no litigation help from the ACLU if they're planning to create an uneven debate stage. No bringing guns to a free speech fight.

The WSJ piece notes that courts are divided on whether the Second Amendment ensures any rights to carry weapons in public:

Eugene Volokh, a law professor at University of California, Los Angeles, said federal judges may deem protest areas to be sensitive places, like schools, where the U.S. Supreme Court has said governments can impose firearm restrictions.

Or like convention centers where the NRA is meeting.

A number of people who joined the ACLU after Donald Trump won last year's election have complained that the Virginia ACLU was supporting Nazis' free speech rights, assuming that the ACLU was primarily a liberal outfit since it's opposed the Trump travel ban and other actions Team Trump has taken to restrict civil liberties. Instead, they're good old First Amendment absolutists, arguing that if the government can restrict Nazis from marching in one case, then a more conservative government might be emboldened to crack down on unions or groups supporting immigrant rights. Chris Hansen, a retired senior staff counsel for the ACLU, said the organization's insistence on free speech for repugnant views wasn't universally accepted by members following the 1978 Skokie case:

It turned out to be a huge surprise to many people who support the ACLU who thought of us as another liberal do-gooder organization[.]

We're all for the ACLU's new position. Gun humpers are always saying the Second Amendment is the foundation of all the others, and it looks like the ACLU is taking them at their word. If you want marches for people with minds that hate, a rifle or pistol's not needed for the debate.

Yr Wonkette is supported by reader donations. Please click the "Donate" clicky and don't bring your guns to town.

[WSJ (try the Twitter link to sidestep the paywall) / TPM]