Actual Illinois Nazi Has Lock On GOP Congressional Nomination, Is On Mission From Hitler 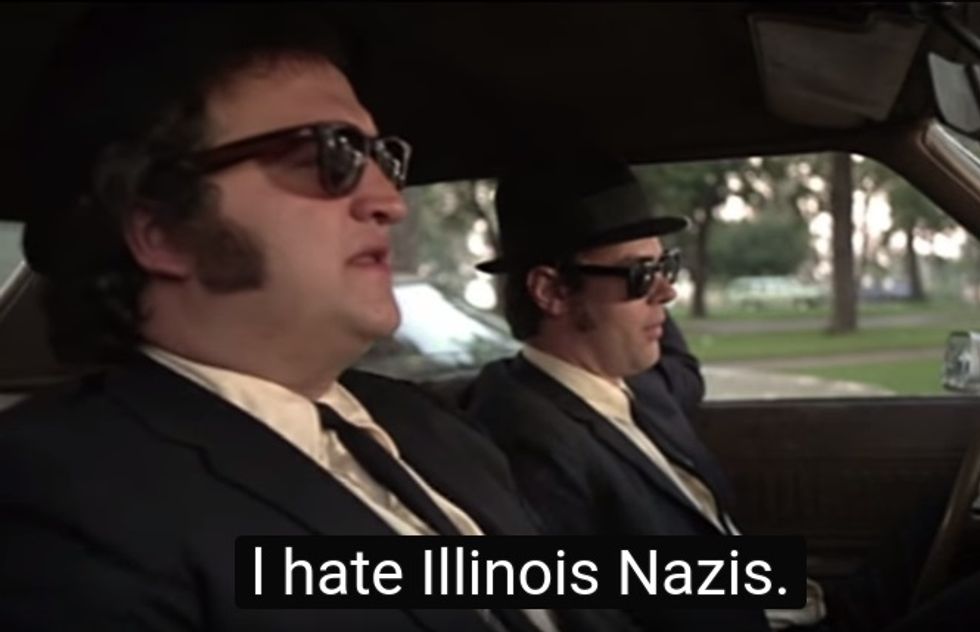 An actual Nazi, one Arthur Jones from the Chicago suburb of Lyons, Illinois, is the only person to file for the Republican congressional nomination in the heavily Democratic 3rd District, a seat currently held by conservative Democrat Dan Lipinski. Happily, there's virtually no chance Jones will win, since, as we say, extremely safe Democratic district. But there aren't even any non-Nazi Republicans running against the 70-year-old former leader of the American Nazi Party. Ever since it was confirmed in 2016 that our planet actually is in the crapsack alternate universe that spacefaring adventurers will find themselves desperate to escape before the end credits, we're no longer entirely surprised by developments like this.

Jones is one of those perennial crank candidates that crop up everywhere; he's previously run seven times for the Republican nomination in that district, but this year is the first time he's been unopposed. He told the Chicago Sun-Times he's as surprised as anyone else.

“And given the fact that I’ve got no opposition in the primary, OK, I win that one (the primary) by default all right,” Jones said during an interview in a coffee shop in Lyons.

Jones says he currently heads up a group with the highly original name the "America First Committee," whose membership is open to anyone as long as they're a "white American citizen of European, non-Jewish descent." If they'd let him run on long enough we're sure he'd have mentioned that he's got a great idea for a new group called the Kool Klux Klan.

Lonnie Nasatir, of the Anti-Defamation League's Chicago-Upper Midwest Region, says Jones has a long list of impressive achievements, like protesting the opening of the Illinois Holocaust Museum and Education Center and promulgating fallacious conspiracy theories about the Nazi genocide. Jones's campaign website features a cheery section with the heading “The ‘Holocaust Racket.’” Says Nasatir,

He has spoken publicly at numerous neo-Nazi rallies and events, expressing xenophobic policies based in racial and religious hatred. He is, by every definition, an anti-Semite and unrepentant bigot.

Jones was in danger of winning the nomination in 2016 as well, but Illinois Republicans managed to challenge enough of his nominating petitions that he was knocked off the ballot. This time around, the state Rs didn't bother running an actual candidate to oppose Jones, but they did at least issue a very firm condemnation of the old Nazi, saying he in no way represents their party. Yr Wonkette understands that a party can't actually forbid some loony from running under whatever party label they want -- Lyndon LaRouche has always run with a "D" after his name -- but we'd like to think that if a Nazi were running as a Democrat, even in the reddest district, we'd be damn sure to find a sacrificial Democrat for the primary. It's an idea.

Once he has the Republican nomination, Jones is almost certain to lose to either Rep. Lipinski or to Lipinski's main challenger, Marie Newman, who's actually running as a Democrat. We'd drop the "almost," but what with this being the universe where our Spock will have a beard, there's still an outside chance of Russian hacking, time-traveling interlopers, or a mutant alien virus that leaves all Democratic voters in the district too obsessed with infighting to see that their only hope is to come together to defeat a common foe, like in "Day of the Dove," where the humans and the Klingons laugh the deadly gaseous low-fi alien away. Why won't we ever learn? Must the crimes of TOS Season 3 haunt us forever?

From his campaign headquarters in the crushed remnants of a Ford Pinto buried 10 feet below a Chicago street, Jones explained he will have to pursue his lonely campaign without help from state or national Republicans, especially not that sell-out Donald Trump. Jones said he now regrets having voted for Trump, who has "surrounded himself with hordes of Jews" like Jared Kushner and that cute Jewess Kushner married.

Rep. Jeanne Ives, running against Kennedy for Illinois governor, steps in shit, twirls around, jumps in with both feet.

In other illinois campaign mayhem, state Rep. Jeanne Ives, that nice lady who's running against Gov. Bruce Rauner from the right and thinks crime is caused by fatherless children except if the children are white, has a new campaign ad that makes clear she's no Nazi, because would you just look at this very humorous thing, in which the most despicable people in the world "thank" Bruce Rauner for enabling their many crimes:

You've got a MAN with a hairy face, dressed like a LADY and saying, in a deep mannish voice, "Thank you for signing legislation that lets me use the girls’ bathroom." Haw Haw! And then a young wastrel millennial gal in a pussy hat says, "Thank you for making all Illinois families pay for my abortions," and a guy who's dressed in what a Republican reading Breitbart figures must be an antifa super-soldier uniform says, "Thank you for opposing law enforcement and making Illinois a sanctuary state for illegal immigrant criminals." He's carrying a neatly printed sign that says "MAKE ILLINOIS A SANCTUARY STATE," because as everyone knows, those dangerous Anarchists are all about going to Kinko's. We'll assume Ives's campaign made the advocate for dangerous illegal immigrants a red-haired white guy because either 1) they thought showing a Latino actor raping a white gal was too racist even for them, or B) they wrote it that way and couldn't find any Latino actors who'd take the job. There's also a black lady, although the worst thing the ad does with her is depicting her as a member of a teacher's union.

So anyway, it's nice of Jeanette Ives to make that ad to tell us she's not a Nazi, just an ordinary rightwing Republican. You can tell, because there's not one single swastika in the ad.

Yr Wonkette is supported by reader donations. Please click here to pay for all our many abortions and our neatly pressed Antifa costume.