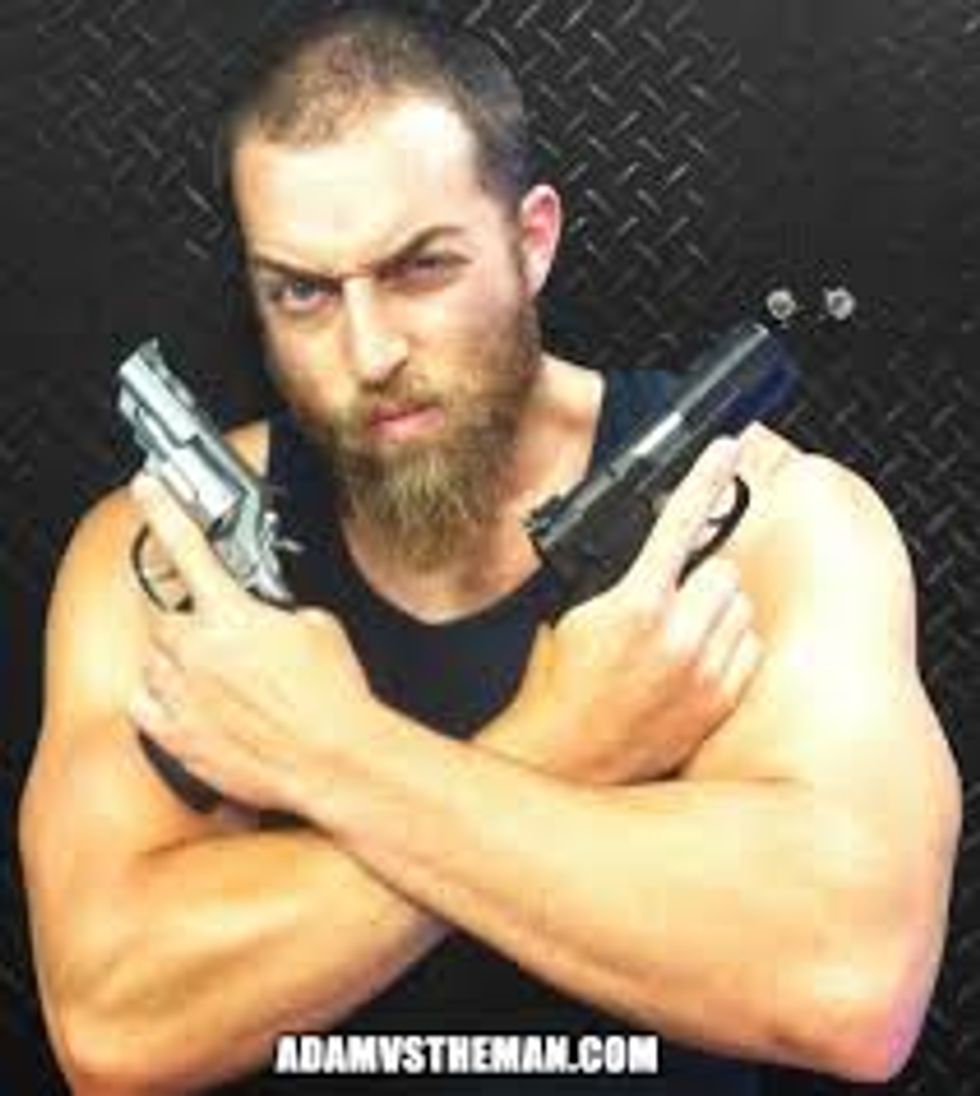 Your Wonkette has been following the long journey of gun-lovin’,Gandhi-quotin’ Adam Kokesh as he takes on the federal tyranny that will not leave him alone to smoke dope and fire off his shootin’ irons in complete freedom. Which is what Gandhi would have wanted for him, presumably because as his life ebbed away Gandhi’s final thought was “If only I had been openly carrying a gun…”

You may recall that Kokesh had originally planned a Million Armed Lunatics March on Washington for July 4th, until D.C.’s police chief gently reminded him that openly carrying guns is illegal in the nation’s capital and they would all be arrested if they tried. So Adam scaled back, and the March became one lone freedom fighter loading a shotgun in Freedom Plaza while recording a video calling for armed revolution (hilariously, the video was titled “Open Carry March on DC a Success”). The police investigated and apparently decided that yes, they would like to arrest Kokesh for breaking the law against carrying firearms in their jurisdiction, thank you!

This, however, does seem a little excessive:

The officers used a battering ram to knock in the door after two knocks, and did not announce that they had a warrant. Immediately after breaking down the door, a flash bang grenade was deployed in the foyer.

Numerous police vehicles, including a light armored vehicle and two low-flying helicopters barricaded Adam’s street. More than 20 armored SWAT team members surrounded the house, as well as a number of detectives, and plainclothes officers. Assault rifles were aimed on all members of the team as they were handcuffed without being told why they were detained. Masked and armored police in full “Storm Trooper” gear flooded in and ransacked the residence.

Far be it from us to believe a word out of Kokesh's mouth without confirmation, and this is all from his own press release. But that said, one of the trends in law enforcement, particularly since 9/11 NEVAH FORGET!!!!, has been the increasing militarization of police forces all over the country. Salon has been excerpting Radley Balko's new book on the subject, Rise of the Warrior Cop: The Militarization of America's Police Forces and it is quite frightening. Go buy it and learn something, and give yr Wonkette some monies while you’re at it!

Kokesh was also charged with possession of shrooms because dude, hallucinogens and guns go together like rama lama lama ka dinga da dinga dong and the colors, man...

What were we saying? Oh right, Adam Kokesh is still a giant douche noodle and the police are (ALLEGEDLY) playing right into his martyr complex, but Jesus H. Christ sighting in his new AR-15, we do not like our cops turning into Rambo wannabes any more than we like the Adam Kokeshes of America doing the same. So we’ll be in our panic room with body armor and a fifth of bourbon if anybody needs us.