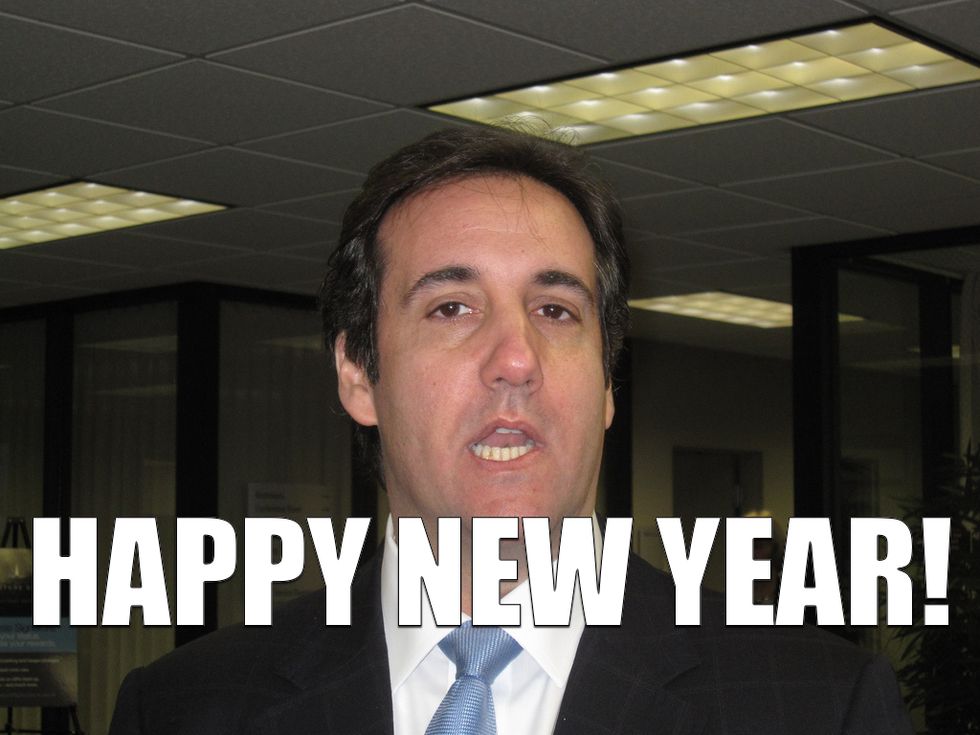 L'Shanah Tovah, Michael Cohen! Can I call you Michael? Mickey? Moishe? Or should we just go with Boychik?

Okay, Boychik! You got to play the macher yesterday, you made your big speech, it was in all the papers. So, Mazel Tov! But now, instead of a kibbitz with Chuck Grassley and that nice Mrs. Feinstein, you have to schlep back to DC next month to testify in open hearing.

Your lawyers hondled for you to voluntarily come in and speak to the senators privately, and not under oath. So if you should accidentally tell them a bissel ligen, you won't go to jail for perjury. All you had to do was keep your mouth shut in public! Zol zein shah! But you, like a schmendrick, ignored your lawyers! What are you even paying them for, Boychik? They should go bang their heads against the wall for all the good it does talking to you!

You seem a little farblondgit! The deal was you'd keep quiet about the case, and they'd spare you the shandah of being interrogated on television the day before yuntif! Get it? Fershtey?

Instead, you're banging on haken a tsheinik that you've "never engaged with, been paid by, paid for, or conversed with any member of the Russian Federation or anyone else to hack anyone or any organization." Bubeleh, no one thinks you're such a genius to hatch a plot with the Cossacks yourself. We all know you're a big talker, a pisk-malocheh, not some untervelt mastermind.

So you're up there kvelling about your daughter's Ivy League school and your son's baseball skills,

I was in Los Angeles with my son who dreams of playing division 1 baseball next year at a prestigious university like USC. We were visiting the campus, meeting with various coaches, and discussing his future.

Congratulations! You should only have nachas from your children! But is now really the time to be such an oyshteler? You're facing down that shtarker Bob Mueller, and you're up there bragging about dos kinder?

My daughter, who is at an Ivy League school, and my wife, who is of Ukrainian descent, have especially been subjected to harassment, insults and threats … some so severe I cannot share them in mixed company.

You might say that the experiences I am living through are the cost of being in the public eye, but they shouldn’t be as I am not a government official. Many Trump supporting Americans are also paying this cost, like the twelve year old child in Missouri who was beaten up for wearing a Make America Great Again hat.

Boychik, you live in Manhattan and you have millions of dollars in the bank. You just got finished bragging about your children, may they go from success to success! But now you want us to feel sorry for you?

If you were worried about your good name, you shouldn't have tried to build that meshugennah hotel in Moscow for that gonif Trump! During the election yet! And that Felix Sater? Such a fershtinkiner! Gevalt! Az man schlaft mit hint, you wake up with fleas!

You'll forgive me being such a yentah, but we are landsmen and tonight is the Jewish New Year. If your own mishpocha won't tell it to you straight, the Finf Dolar Feminist will. Boychik, these people are not your friends! That momzer Trump will throw you under the bus tomorrow. You want to go to jail, godforbid chas v'shalom? Tell that nice Mr. Mueller that you'll give him whatever he wants if he'll just give you immunity from prosecution.

It's a new year! Tonight you'll eat your apples and honey. And Monday, you'll make a fresh start. If a bear can dance, you can become an honest man, Michael Cohen!

[If you want a nice Italian lawyer to break down Michael Cohen's speech, rather than a Jewish mother, check out Just Security]

Happy New Year to all the Wonkers who bat for the J-Team! Don't forget to support your favorite yiddish politics and snark mommyblog! Also it's your OPEN THREAD!