AFA Lady Sandy Rios: Why Waste Time On Dumb Fake 'Sex Trafficking' When We Should Be Stomping Out The Gay? 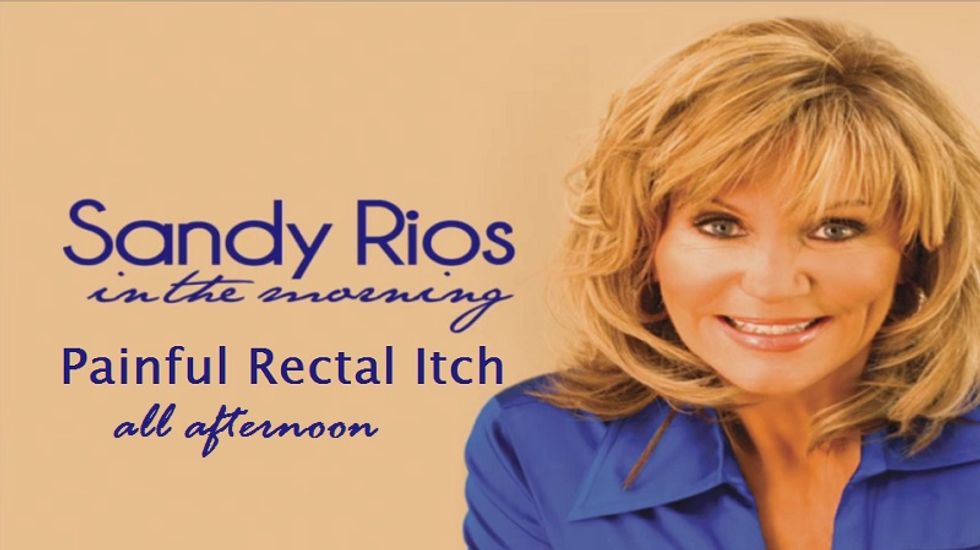 Sandy Rios, the American Patriarchy Association's "governmental affairs director," is not happy at all with the Republicans in the Senate this week, but not so much because they're holding up the confirmation of Loretta Lynch for the sake of putting some anti-abortion language into a bill to help victims of sex trafficking. Rios actually couldn't give a rip about Lynch -- who is evil, because appointed by Obama -- but she's pretty cheesed that the Senate is wasting precious legislative time on a bill addressing sex trafficking, which Rios is fairly sure is hardly even a thing at all, especially when compared to the existential crisis our once-proud nation faces from The Gays.

It's not that she doesn't think sex trafficking is completely fictional. No, instead, she's quite certain that the extent of the problem is merely "overblown," a trifle that hardly deserves mention. Just like "homelessness," which is also no big:

This is where misguided people are really affecting the system in a bad way. And this is going to be very controversial what I’m about to say, but I’m going to say it. This whole business of sexual trafficking in the United States, I’m not saying it’s not something of note, I’m not saying it’s something I approve of, but I suspect, methinks, it has been overblown, methinks this is much like the homeless issue that was absolutely blown completely out of proportion by the press and by others many years ago. I think there may be some problem because we have such massive immigration from countries that actually practice this. I doubt it is the huge, huge, huge, huge, huge issue that people want you to think it is.

So sure, maybe there are some women being forced into prostitution and then smuggled across the border along with measles and ISIS members, but on the whole, it's no big whoop. And neither is homelessness, so could we just revise those bums right out of Matthew 25: 31-46? Because the real problem with this country is The Gays, who Jesus specifically condemned in the Book Of (mumble something about Leviticus and Paul here). But is anyone fighting the gay anymore? No, they've just given up!

This is the thing that bothers me: I see ministries and churches jumping on the bandwagon, they are all about saving the women who have been sexually trafficked, this is their great sacrifice, this is their great stand on social issues, at the same time will not say a word, not a peep, about homosexual marriage, hardly anything about homosexuality and what God says about it because that, you see, would cost something. But sexual trafficking, you see, ‘we’re outraged about that,’ not so much about gay marriage because that might be a little icky, we might offend people in the congregation. But sexual trafficking, that’s huge.

So John Cornyn from Texas, Mitch McConnell, they’re hearing from evangelicals who are into sexual trafficking, such a controversial issue, it raises a lot of money and nobody disagrees, it’s a safe issue. By the way, I’m not saying don’t help women who are sexually trafficked or little boys, whoever, but I’m saying it is the coward’s embrace, that’s my opinion. It is the secondary issue of our day, it’s not the one that is threatening the culture.

Besides, they are just dumb whores, and there aren't that many of them, while Sandy Rios knows that gays are serving openly in the military and making our navy boats go all haywire with their sodomy!

Sandy Rios is not fooled -- sure, maybe the Senate R's are throwing a "bone to evangelicals" by making sure that pregnant trafficked women can't have taxpayer-funded abortions like the sluts they are. Really, she's OK with stopping that, but she also thinks that this pretended compassion for the fetuses of victims of trafficking is "the coward's issue of the day," because it does nothing to stop people doing sex in the butt, which will surely be the ruination of America.