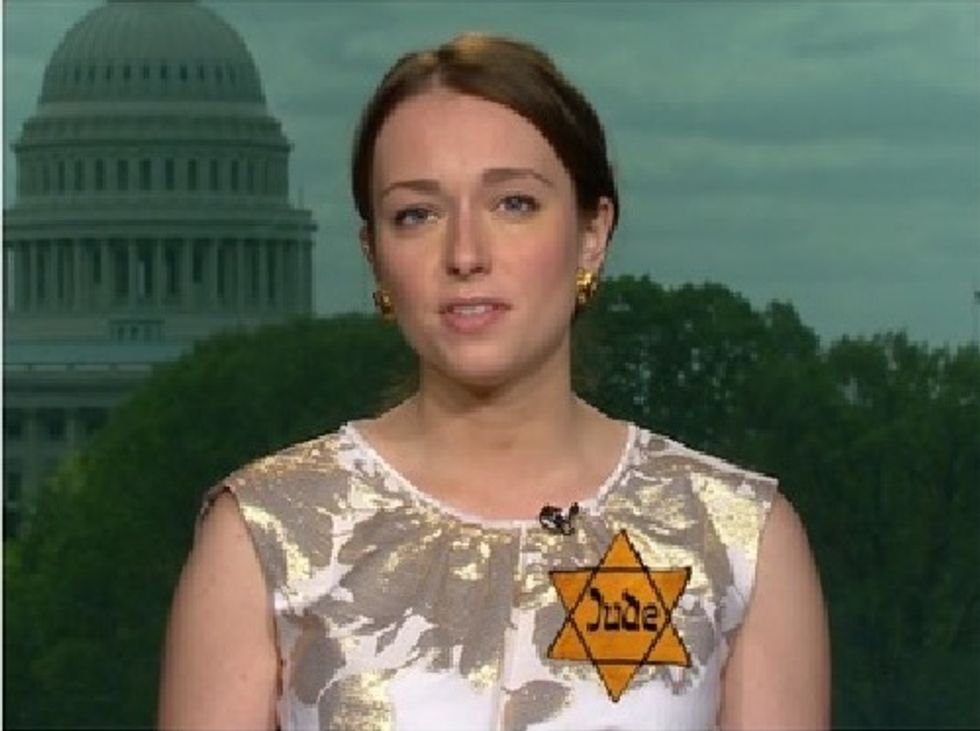 So a couple days ago, GQ ran a profile of Melania Trump that portrayed her as a pretty smart woman (hinting that she's actually smarter than her husband) who's private, ambitious, and like Donald, astonishingly gifted at giving opaque answers to questions. Author Julia Ioffe's big "get" is her discovery that Melania Trump has a half-brother who's barely acknowledged by her family. Ms. Trump originally denied to Ioffe that such a person even existed, then, when Ioffe sent her the Slovenian records she'd found, wrote back saying she'd misunderstood Ioffe's question, adding "I’ve known about this for years...My father is a private individual. Please respect his privacy.” So far, she sounds like a Trump, all right!

Melania Trump took her displeasure with the article to Facebook, accusing Ioffe of "looking to make a name for herself" -- which should be news to Ioffe, a well-established journalist -- and accusing her of "numerous inaccuracies" which somehow never get specified. Weirdly, and again like Donald, the thing that really pisses her off the most is a suggestion that one of her business ventures isn't a huge success:

We'll leave it to Talmudic scholars to parse the difference between Ioffe's line about the skincare products: ("Melania’s caviar-infused anti-aging creams haven’t sold as well [as her jewelry], though a federal judge ruled in her favor in a lawsuit she filed against its promoters") which is completely false, and Melania's version ("The company in which I was involved with did not honor the contract and did not meet their obligations and as such the courts ruled in my favor") which is competely true. The difference? We don't know!

That single Facebook post was, of course, the signal for Donald Trump's Flying Monkey Brigade to go on the attack, tweeting anti-Semitic images to Ioffe, calling her up and playing recordings of Hitler speeches, and reminding her that the Holocaust was a complete hoax, and the Jews totally deserved it. Ioffe tweeted that she'd received a call from "Overnight Caskets," and also that her day ended "with a call from Aftermath Services, inquiring about that homicide clean up I ordered." Haw Haw! And then there were all the HILARIOUS Death Camp jokes!

By some miracle, Donald Trump didn't accidentally retweet any of those, so he's good.

A picture of Ioffe wearing a yellow star even provoked a joking exchange with New York magazine's Jonathan Chait, who's angered the Trump mob more than once himself:

As the deluge of anti-Semitic emails and calls continued Wednesday and beyond, her attitude became a bit less benign, as she told The Guardian:

“It’s unsettling,” she said on Thursday night. “I started the day off having a sense of humor about it but by the end of the day, after a few phone calls like this, with people playing Hitler speeches, and the imagery, and people telling me my face would look good on a lampshade, it’s hard to laugh.”

She's particularly concerned about the Trump cult's willingness to mobilize over the slightest perceived insult to the Great Leader (haha, remember how Barack Obama supposedly inspired mindless idolatry?), even over a generally inoffensive magazine profile which actually says some rather nice things about Melania:

“This is not a heavily critical article. There is nothing in it that is untrue,” Ioffe said. “If this is how Trump supporters swing into action, what happens when the press looks into corrupt dealings, for example, or is critical of his policies?”

Ioffe knows a thing or two about organized anti-Semitism, having immigrated from Russia as a child and majored in Soviet history at Princeton. When she returned as a journalist to work in Moscow for three years, she also saw what charming intimidation a quasi-totalitarian regime can hand to journalists, like seeing "colleagues receive bouquets of funeral flowers at work," not to mention the occasional murder of journalists -- another Donald Trump laugh line. Like some kind of simpleton, she never thought that sort of thing would happen here in the Land Of The Free:

“The irony of this is that today, when I was getting all of this horrible antisemitic shit that I’ve only ever seen in Russia, I was reminded that 26 years ago today my family came to the US from Russia. We left Russia because we were fleeing antisemitism,” Ioffe said. “It’s been a rude shock for everyone.”

Then again, she did write some slightly unflattering things about Melania Trump, and used some irony, which as everyone knows is a key part of the Jewish Agenda, so she has only herself to blame. It's not like Donald Trump is echoing any kind of fascist behavior or anything. We wouldn't worry unless he adopts some sort of obvious throwback slogan to anti-Semitic movements of the past, like "America First."