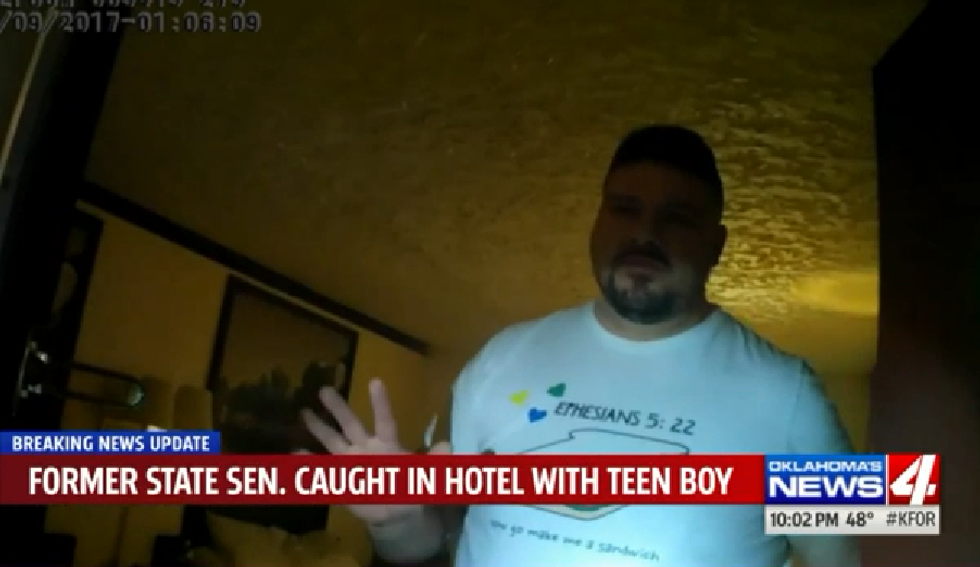 Ralph Shortey is a former GOP state senator in Oklahoma who recently pleaded guilty to child sex trafficking after he was caught in March at the Super 8 Motel in Moore, Oklahoma, with a 17-year-old boy he wanted to pay for sexual "stuff." Shortey also originally caught child pornography charges, but those were dropped as part of his plea deal. He will spend at least 10 years in jail for his crimes.

Previously, Shortey was Wonkette famous in 2012, for being the only hero in America ready and willing to protect America from the abortionists who want to fill our snack cakes and our processed meats with fetuses, because OBVIOUSLY. In the past, he pushed for open carry laws, to protect Oklahomans from wild turkeys. (For real.) We guess wild turkeys know what's up when they see a good guy with a gun, but not so much if the good guy's piece is concealed. He is a birther, and also he hates immigrants. He seems nice!

We bring all this up because the Moore Police Department has released body cam footage of its March encounter with Shortey at the Super 8 and HOLY SHIT LOOK AT THE T-SHIRT HE IS WEARING:

You see that? It has a sandwich on it, and also some colorful hearts for some reason. Below the sandwich, it says "now go make me a sandwich." Above the sandwich, it says "EPHESIANS 5:22," to let you know this is not only a sexist pig shirt being worn by a traditional values guy in a hotel room with an underage boy he wants to pay for sex, but it is a BIBLE SHIRT.

GET YOUR ASS IN THE KITCHEN, BITCH!

Just kidding, that is just something a sexist redneck guy might say to his Christian wife, because trying to bang underage boys in motel rooms has made his tummy rumble. This is Ephesians 5:22:

Wives, submit yourselves to your own husbands as you do to the Lord.

LOL, we were right the first time. AND MAKE THE LORD A SANDWICH TOO, WHILE YOU'RE AT IT!

Now, we must quickly (very quickly) do a little Bible lesson to your heathen faces. You see, conservative evangelical men fucking love that verse, and they quote it as if Jesus just stuck it in the Bible without any context, to excuse their shitty behavior toward their wives. There is more to the passage, though:

Husbands, love your wives, just as Christ loved the church and gave himself up for her to make her holy, cleansing her by the washing with water through the word, and to present her to himself as a radiant church, without stain or wrinkle or any other blemish, but holy and blameless. In this same way, husbands ought to love their wives as their own bodies. He who loves his wife loves himself. After all, no one ever hated their own body, but they feed and care for their body, just as Christ does the church -- for we are members of his body.

Now, is it still a wee bit retrograde? Surely, ayup, you bet! But it's not the simple "get in the kitchen and make me a sammich!" message Ralph Shortey's biblically illiterate perv ass thinks it is. Indeed, if Shortey had been loving his wife as much as he loved his own body and feeding her (maybe sammiches!) and caring for her needs, LIKE THE FUCKING BIBLE INSTRUCTS, he probably wouldn't have been at the Super 8 with that young boy that night trying to amuse his dumb dick.

We are just saying, and know who else is saying? THE LORD IS JUST FUCKING SAYING.